Releasing their debut album, Ghosts of Yet to Come, in 2017 on the Frontiers label, Wayward Sons have already built a strong reputation as a great band to see live. This was more than apparent at Download last weekend when the Midlands Rocks team just about managed to squeeze into the packed out Dogtooth Stage. Dean Pedley sat down with Toby Jepson to talk about their set and the bands future plans…

Toby, we’ve just seen you play to a packed out tent here at Download…

You got in! It was exceedingly hot but what an extraordinary experience, I would have been happy with a half full tent but I couldn’t believe it when I went out it was absolutely packed. There were people ten deep outside and the heat coming off the audience…I loved it. 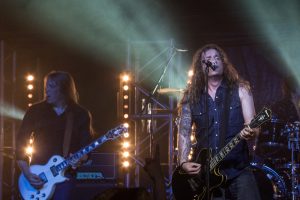 Thank you. What I’m always interested in doing at festivals like this… because they are always chuck and go where you don’t get a sound check or anything like that….all you’ve got is your vibe where you hope for the best and try to have a great time. And I think that it going to rank as one of the most exciting gigs I’ve ever done, it was really really good fun.

I’ve seen you at a fair few festivals over the years. I remember a couple at Milton Keynes in the 90’s

I’ve been very privileged. Like you say Milton Keynes Bowl we played that with ZZ Top and then again with Bon Jovi and that was extraordinary. And then we played Wembley Stadium with Bryan Adams on the “Waking The Neighbours” tour. But to come here and play Download with a new band, not something I thought I would be saying at fifty years old, and to get that kind of reaction from the audience was something else.

It’s been a great reaction for Wayward Sons, do you see this band as your way forward as a performer?

Yes, Wayward Sons is my main focus. It took a lot to come back and put all my eggs in this one basket but its working. There is a lot of love out there for Rock at the moment and because I’ve got a bit of a track record and because we made a really good album it’s been appreciated. And I don’t think that my being in Little Angels has helped at all; for people that were fans of Little Angels then it’s great for them but the reality is we want to spread ourselves even wider.

How far do you think you can take this band?

We’ve signed a four album deal with Frontiers and so there is the next six years already planned out. So with any luck we can get through that and with any luck I’d love to be back in the theatres and playing Hammersmith and places like that again. That’s my goal and judging by the reaction today I think that is possible. But there is no sense of entitlement for me I don’t believe that I’ve got a right to be here because I was in a band twenty years ago. That is a nice memory for everybody but if I don’t make great music then it doesn’t matter. So I think there is a chance if we can keep making records that we will find our way and having a sense of integrity, authority and authenticity. I honestly believe this is the best music I’ve ever made. 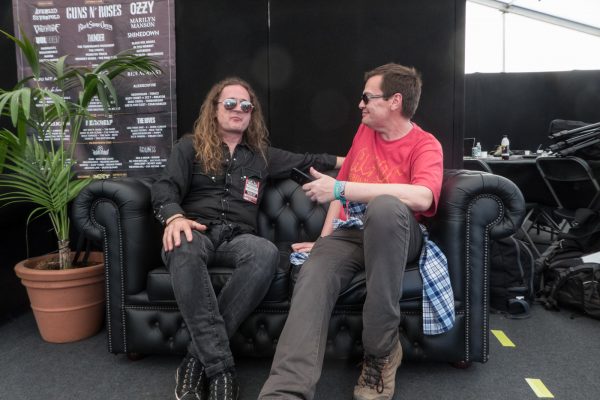 Along with Rob Town you’ve also launched an initiative to help young bands, Lightning in a Bottle. What’s that all about?

It’s a Company born out of frustration in a way. Both Rob and myself have worked with young bands and outside of my career as a performing artist I’m a record producer and I write songs for artists. And we started to see that there is a problem navigating through the music business for a lot of young bands, they make very obvious mistakes. They get too obsessed with likes on Facebook and Tweeting and all this sort of stuff when actually they should be spending far more time getting the music right. And I’ve seen this as a producer. Often the bands usually don’t know what each other like in terms of music and their communication isn’t great. 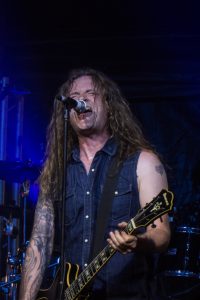 You’re right; I know that for certain if you don’t all communicate, have a focus and have a direction on which way you want to go then you can’t just conjure music out of the ether and hope for the best. What you have to do is understand who you are, find out what your common goals and desires and dreams are and make a plan around that and put into a musical form. And because I’ve produced records and had hit records I do know what it takes…I do have an instinct for it. And we want to bring that together and make it all about the music. So this is about putting music back at the heart of being a musician, that’s our tagline. Rob’s brilliant he’s been in bands like Panic Cell and done lots of playing and helped a lot of young bands with his PR company and so collectively e feel like we can really offer some solutions and creative thinking.

I feel really really inspired at the moment. I absolutely love being in Wayward Sons, I’m never going to be in another band this is the only band I ever want to be in again. And outside of that Lightning in a Bottle is really exciting and I’m looking forward to getting on with it. We’re not managers, we’re not agent; what we are is music people…because that’s the only thing that matters.

For more on Wayward Sons:-
https://www.facebook.com/waywardsonsbanduk/

Lightning In A Bottle:-
https://www.facebook.com/LIABMusic1/