Mallory Knox lead the way into day two of Download as the skies above rumble and the congregation of metal-heads begin a communal groan, shaking their fists at the intimidating black clouds, who are almost laughing at those only protected by last night’s saturated Slipknot hoodie. Although the band acknowledge that the crowd is somewhat lethargic in comparison to Friday, they still manage to convince the front few rows to bob up and down in the sludge for a fair few songs while vocalist, Mikey Chapman, illustrates himself as an even more genuine ginger than Ed Sheeran. The band seem to attract more people than I at first anticipate, which is a pleasant surprise as they are an unusual choice for a mainstage slot and prove themselves as an act rising to success rather quickly.

Creating brief earthquakes with their brutal breakdowns and filthy riffs are the Australian hard-core band, Parkway Drive, who instantly inject energy into the crowd even at the sight of their new backdrop. It would appear that the British can’t get enough of ‘Deliver Me’ and ‘Dark Days’. However, their newest track, ‘Vice Grip’, doesn’t quite live up to the standard that Parkway set for themselves and is presented rather mechanically in comparison to the rest of their set. Given that the band are renowned for their monumental stage shows, such as 2013’s Download where the sheer number of crowd surfers tested the security staff to breaking point, this year, by comparison, is somewhat disappointing.

Finally awakening seemingly the whole of Donington from the comfort of their paddling pools… ahem… I mean tents, are A Day to Remember, revealing a show which is arguably headliner worthy as vocalist Jeremy McKinnon even suggests himself, instructing the crowd to ‘tell the promoters if you wanna see more’.  All sorts of obscure objects are hauled around the field through the band’s heavier concoction of tracks such as ‘The Downfall Of Us All’ and ‘City Of Ocala’. Surprisingly nobody seems taken back by the guy sailing over the hands of the masses with a dildo strapped to his head.  ‘Have Faith In Me’, a song with more cheese than a Dominos deep pan mozzarella, is the perfect opportunity for a quick karaoke although there is something that feels slightly wrong about acoustic guitars at Download.  A few circle pits whirl about as the moshers eventually fall so many times that they become camouflaged into the mud (that or they look like walking turds). Without a doubt, ADTR are the most well received band not headlining of the weekend so far.

The sky is noticeably clear of both rain and bottles during Black Veil Brides’ set in comparison to their last appearance which saw many of the BVB army being splattered with cups of what can only be described as ‘warm beer’. Smashing into their hits, ‘Faithless’, ‘In The End’ and ‘The Legacy’, frontman Andy Biersack struts around the stage commanding the attention of every teenager with backcombed hair and war paint. The band have so much pyro that I fear for their loreal-advert-worthy locks being singed off; it’s evident that BVB are insistent on winning more fans than before and with the energy that they throw into the show on this occasion, it is a target that is definitely met.

As the crowd sceptically awaits the headliner of the night, Muse, who stick out like a sore thumb against Slipknot and KISS, nobody can possibly predict how their set will go down. Incessant to win over all the malicious pre-conceptions of the band, who could easily fall into the line-up of pretty much any festival, Muse kick off the night with ‘Psycho’ and ‘The Handler’, allowing for the first few pits to emerge as the flame cannons hiss at the cynics.  Frontman Matt Bellamy silences the critics with vocals that appear to be even better live than recorded as the people of Download fail miserably at singing back ‘Hysteria’ even remotely in tune. At first, many are reluctant to involve themselves with the band so often branded as ‘pop sell-outs’. However, as it becomes increasingly clear that Muse are deserving of the hype surrounding them, the older blokes in battle jackets loosen up and can’t help but headbang through, ‘Supermassive Black Hole’ and ‘Time Is Running Out’.

Muse’s encore is somewhat spectacular while it litters the sky with fireworks and flames and is the only point during the weekend so far that sunglasses are appropriate for. The band power through, ‘Uprising’, ‘Plug In Baby’ and ‘Knights of Cydonia’, as the horde gathered to make their judgements still remain electric. Ending with one of the loudest applause of the weekend, triumphantly the only British headliners abandon the stage having made Download history. Will this be the first of many Muse appearances at Download? I sure hope so.

Read our review of Day 1 here 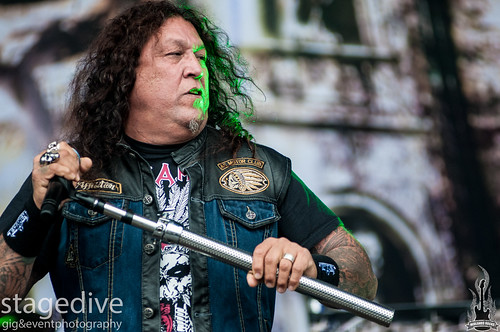