As I join the flock of rockers embarking on the pilgrimage to the Holy Grail known to everyone within our culture as Download, the heavens above open as well as below, creating a storm that could not define the true spirit of a British heavy metal festival any more perfectly. While most music fans would be put off by the unfortunate weather, it would appear that the typical outcome of this British summer has not fazed the people of Download as the weekend turns out to be a whirlwind in itself.

After spending my life savings on a veggie burger (turning out to be as cold as the majority of the crowd’s nipples), Five Finger Death Punch are first on my ‘to-see list of the day’. The band prove to be as popular as ever while frontman, Ivan Moody, even invites a few kids on stage and encourages them to head bang, showing the crowd their devil horns; what a story for show and tell those guys will have when they get back to school on Monday! Popular song choices, ‘Hard To See’, ‘Never Enough’ and ‘The Bleeding’ make the set a success and a great opportunity for a bit of a sing song as Death Punch once again conquer Donington, leaving the stage with smug smiles.

Over on the second stage, Kentucky lads Black Stone Cherry make their latest appearance at the home of metal, once again pulling a respectable crowd. I’m pretty sure ‘BSC! BSC! BSC!’ can be heard even by those dressed in jumpsuits on the front row of the main stage waiting for Slipknot and the appropriately chosen opening song, ‘Rain Wizard’, sends the mass of fans into even louder shouts of admiration for the band. The sea of black t-shirts quickly transforms into yellow ponchos as ‘Me And Mary Jane’ is played. However, this does not prevent the good old British folk from head banging and singing back to vocalist Chris Robertson, who arguably has one of the best set of the pipes of the whole line-up. While the rain continues to fall like bullets onto the sunglasses resting on the heads of those fooled by the morning’s misleading rays of sunshine, the  famous Download camera crew capture truly beautiful scenes of the real essence of a rock festival as many climb on the shoulders of their heavily intoxicated and mud ridden peers during ‘Peace Is Free’. It’s hard to imagine this atmosphere at any other setting than Download and really establishes an unmistakable sense of unity among the brothers and sisters of Donington.  Ending with the song that has become much like an anthem to Black Stone Cherry fans, ‘Lonely Train’, the band show promising signs of becoming potential future headliners and really demonstrate how much they have evolved since their initial appearance all those years ago.

Inevitably, the herd races to the main stage to catch the rest of the almighty Slipknot after Black Stone Cherry. During the process of doing so, many not bearing wellies are claimed by the infamous mud baths of Download, presumably never to be seen again. Despite an alteration in the band’s appearance, it’s clear to observe that these American maniacs are no strangers to this festival as they are welcomed home through ‘The Devil In I’, transforming the field into a jungle of wild animals hungry for eye contact with the biggest rock star of this generation, Corey Taylor. It’s hard to distinguish whether the heat felt from the stage is from the impressive pyrotechnics that the band’s team have forked out for or from Jim Root and Mick Thomson’s non-stop shredding, which appears to be note perfect (can I really say otherwise after that knife incident with Thomson though?).  ‘Vermillion’, ‘Wait And Bleed’ and a new track, ‘Killpop’, all cause some serious windmilling action from the crowd both at the front and the back as I am adopted into the circle of  a group of seriously sloshed guys busting out some rather impressive moves considering the state that they are all in.

Just as Donington’s metal-heads have nearly lost all energy, the band play a personal favourite, ‘Spit It Out’, stopping for a short inspiring speech from Corey about the band’s success and how much they love their fans (although this is questionable seeing as dedicated followers were expected to wave away hundreds of pounds for a meet and greet ticket during their last UK tour). We’ve all heard this request from just about every band before so I am not prepared for the majority of the tens of thousands gathered to actually fall to their knees pretty much instantly after being instructed to in preparation for the end of the build up during the track.  The fact that almost everyone rises back up successfully without being put off by the suspiciously smelling brown earth below is a miracle within itself and seems to impress the frontman who continues to scream his guts out alongside his band mates who are all running around the stage frantically.  A three track encore ends with, ‘Surfacing’, followed by ‘Til We Die’; a sentimental tribute to Paul Gray playing as the knot exit the stage ending the mass carnage. Despite their struggles over the years, Slipknot prove to show signs of taking the title of the world’s most successful group and set the somewhat unachievable standard for the headliners who will follow over the weekend. 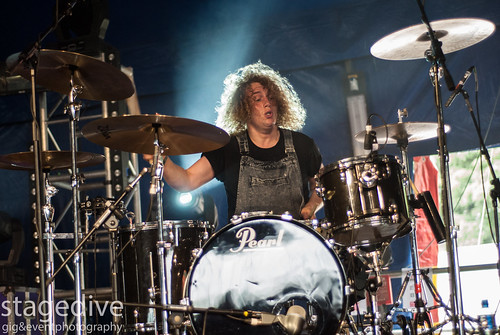