Yes it rained all week (a lot). Yes it was muddy. Very muddy. But despite (unconfirmed) national media reports of fans leaving the festival site in large numbers before the music had even started Download 2019 still delivered where it mattered most with some spectacular performances across the weekend. Fans of all genres across the broad spectrum of “Metal” had the opportunity to say farewell to legends, welcome back old favourites and check out the next generation. Band announcements for Download always inspire heavy debate but you only had to look at the diverse Main Stage headliners – Def Leppard, Slipknot and Tool – to recognise that the organisers had once again succeeded in putting together a line-up where there would be bands you simply couldn’t miss and bands that would allow you an early night. 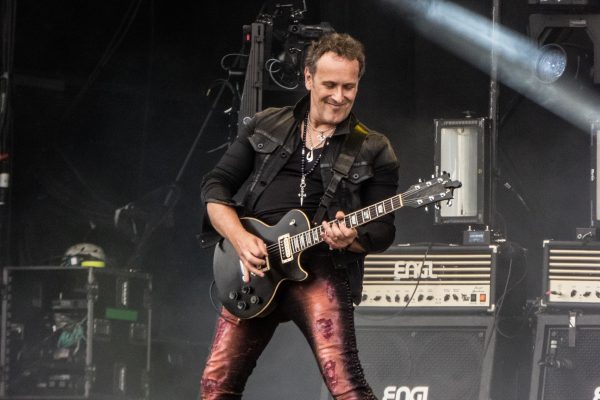 Book-ending the main stage on Friday was guitarist Vivian Campbell who kicked off the festival with Last In Line. It is fair to say that LIL have had their doubters and naysayers but have evolved to much more than just a Dio nostalgia act and their performance was very much around this years II album. Andrew Freeman is a powerful and charismatic frontman and led the way through ‘Landslide’ and ‘Give up the Ghost’ with their classic Hard Rock sound built around Campbell’s riffs, supported by bassist Phil Soussan and the ever dependable Vinnie Appice. Inevitably they closed with ‘Rainbow in the Dark’ which saw Freeman going walkabout into the pit and being rewarded with a huge response from the crowd which grew in number throughout. A great start then and one which very much set the scene for the rest of the day.

Tesla returned to Download for their first appearance since 2014 and served up another well crafted set of melodic rockers that were many taken from landmark 80’s albums Mechanical Resonance and The Great Radio Controversy although did include ‘Tied to the Tracks’ from latest release Shock. Unlike many of their peers Tesla have had a pretty consistent line-up and still boast four-fifths of the core members. Frank Hannon still possesses a sublime touch and Jeff Keith’s voice has held up well even with the passing of time, ‘Love Song’ and ‘Signs’ ending the set on a high. It was then time for a dash through the mud to the Dogtooth stage to catch some of Those Damn Crows although the MR team were far from alone in this and arrived to find it was very much of a case of hover outside and try to catch a glimpse of the Welsh five piece. Although we couldn’t see much of them they certainly sounded damn good and the packed out tent gave off a raucous atmosphere for ‘Blink of an Eye’ and ‘Rock N Roll Ain’t Dead’. TDC are enjoying a growing reputation and a spot on a bigger stage surely awaits.

The always reliable Blackberry Smoke were next up on the main stage and their good time vibe of Southern made American rock and roll is perfectly suited to a mid-afternoon festival slot. A well-oiled live machine that are seemingly always on the road Charlie Starr & co moved though ‘Waiting for the Thunder’ and ‘Shakin’ Hands with the Holy Ghost’ and there was a nod of the Cowboy Hat in the direction of both the Beatles (‘Come Together’) and Zeppelin (‘When the Levee Breaks’). Truly a band that never disappoint on stage, Blackberry Smoke enjoy a rock solid fan base in the UK and we look forward to continuing to welcome them back year after year. 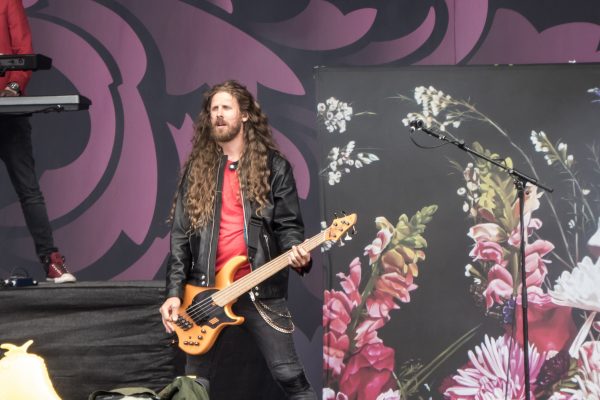 The first thing noticeable when Delain took to the Zippo stage was that this was a slimmed down line-up. The band subsequently confirmed that second guitarist Merel Bechtold had amicably decided to move on and that they would be continuing as a five piece for the immediate future. Inevitably Charlotte Wessels gave one of the strongest vocal performances of the day and her voice rang out crystal clear as the melodic symphonic rockers offered a career spanning set that included ‘Suckerpunch’, ‘The Glory and the Scum’ and ‘Masters of Destiny’. There is a powerful bond between band and audience that grew even stronger during ‘We are the Others’, a rousing closing anthem that hit the spot from the front row to the very back. A stand out performance of boundless energy, Delain will be back in the UK in February 2020. 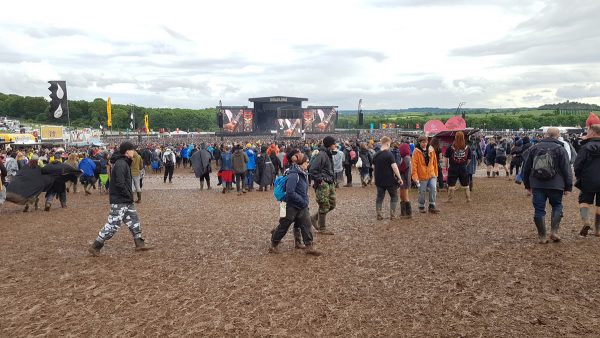 Back over on the main stage David Coverdale and Whitesnake were moving through the gears. Or rather guitarists Reb Beach and Joel Hoekstra were indulging in a dual guitar solo as DC was taking one of his infamous mid-set breaks. When he does reappear, golden locks, ultra white teeth and all, there are numerous references to “Donington” as opposed to “Download” and a couple of new numbers before he is off again and Tommy Aldridge takes centre stage with his fist pounding drum solo. Eventually Coverdale rolls back the years with 80’s classics ‘Is This Love’, ‘Give Me All Your Love’ and ‘Here I Go Again’ all prompting huge audience sing-a-long’s and a pulsating ‘Still of the Night’ ensuring that whilst this may not be vintage Whitesnake they still still know how to please a crowd. 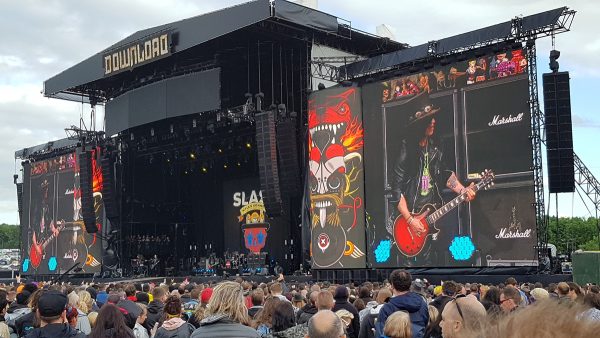 Twelve months ago Slash was in imperious form during Guns N’ Roses set but despite the resurgence of his parent band the guitarist is pushing on with his solo career that still bears the weighty name Slash featuring Myles Kennedy and The Conspirators. One change is apparent in that there is much less reliance on Guns material to flesh out the set and across the seventy minutes there is only a romp through ‘Nightrain’. Much of the performance is now built around Living The Dream with ‘The Call of the Wild’, ‘My Antidote’ and ‘Mind Your Manners’ boasting biting blues riffs and dramatic solos that combine with Kennedy’s unmistakable vocals. With a solo career and Alter Bridge, the versatile vocalist is seemingly always out promoting one album or another and with licence to roam the stage his partnership with Slash is a formidable combination. The full throttle set goes by at a breakneck pace and closes with the scintillating ‘World on Fire’ complete with extended soloing.

In case you missed them, our stand alone reviews of Deadland Ritual and Def Leppard can be found here:-