A nice double bill, this, playing several shows around the country, and drawing a good crowd to the Robin on a Bank Holiday Monday night. There was a third band on the bill, Birmingham based Oktopus, but they played their set much earlier than the advertised start time of the gig, and, by all accounts, a lot of people missed them as a result, which is a shame, so I hope I can get to see them sometime in the future.

Dave Kerzner has worked with a long list of musicians in his time, including Jon Anderson, Keith Emerson and Steven Wilson, but is possibly best known on this side of the Atlantic for forming Sound of Contact with Simon Collins. He’s also recently recorded an album with Heather Findlay, late of Mostly Autumn, which explained part of the composition of his band, fellow Findlay collaborator Stu Carver on bass and current Mostly Autumn drummer Alex Cromarty. There’s also his own musical partner Fernando Perdondo on guitar, and, clearly creating a lot of interest in tonight’s crowd, former Pink Floyd backing singer, Durga McBroom.

The band opened with an instrumental, ‘Crossing The Tales’, which had a brief excerpt from ELP’s ‘Tarkus’ at its conclusion, in tribute to the late Keith Emerson, and during the set Kerzner had a number of entertaining stories about their work together, before Durga McBroom entered the stage to add her own powerful voice. I don’t know if it was coincidence, but the next song in the set had quite a Floyd influence in parts, and a lot of the early part of the set was quite generic prog, quite listenable, but not very exciting. However, as the set went on, things improved and there was some interestingly songwriting in songs like ‘Escape the Ice’ and ‘Under Control’.

For many, the highlight of the set would have been a cover of the Floyd’s ‘Great Gig in The Sky, which of course, Durga McBroom sang on stage with the band for many years, but to be frank, that was Pink Floyd, this wasn’t. Accompanied by Kerzner on piano and Perdondo on slide guitar, her voice was over amplified and had some serious reverb on it, sounded somewhat distorted and in the context of the set, it was not a highlight. Far better was another cover, this time ELP’s ‘Lucky Man’, again played in tribute to Keith Emerson. The band managed to put their own stamp on it, with a nicely bluesy arrangement, and then, to round out the set, a medley of songs from the Sound of Contact album, and a song dedicated to the late producer Kevin Gilbert, which began in a very acoustic, Neil Young style, before exploding into an outer space blues. Really, really good.

Chicago’s District 97, apart from looking seriously fresh-faced, at least compared to a lot of the grizzled Prog veterans in the audience, have been described playing ‘complex’ prog with ‘interesting’ time signatures, but highly melodic, and on tonight’s evidence, I’m not going to argue with any of that description. One of the first things that struck me about this set, though, was the extremely high level of musicianship in the band, especially from guitarist Jim Tashjian and bassist Tim Seisser. The guitarist broke a string in the second song, ‘Death From A Thousand Cuts’, which required him to call on Fernando Perdondo to borrow the latter’s guitar while his own was repaired, which didn’t seem to bother him in the least. The obvious focal point of the band, though, is singer Leslie Hunt Siebold, who somehow manages to dance along to whatever inventive rhythm a particular song is set in and is also possessed of a fine, strong voice. A lot of the press the band will get will focus on the fact that she’s a former ‘American Idol’ finalist, but that shouldn’t get in the way of what an excellent singer she is.

As was to be expected, most of their set came from the recent In Vaults album, although they also gave us an excellent ‘A Perfect Young Man’ and ‘Read Your Mind’ from Trouble With Machines. New keyboard player Andrew Laurence seems to have integrated into the band pretty seamlessly, although, even positioned at the front of the stage, he can be a quite anonymous stage presence. Tim Seisser cuts a much more animated figure, despite being positioned at the back of the stage, and with his 6-string bass, seems to have the potential to be a bit of a showman.

A mention too, for drummer Jonathan Schang, who makes keeping time in District 97’s complex numbers look ridiculously simple. Some of the band’s riffs are fantastically complicated, particularly songs like set opener ‘Snow Country’ and ‘Takeover’, which still manages to be highly melodic even with its complexity. The obvious point of reference for District 97 is King Crimson, something the band emphasise by playing a cover of ‘One More Red Nightmare’, although the band introduce it as being renamed as ‘One More Orange Nightmare’, in reference to a certain American Republican Party Presidential candidate. In the finest Prog tradition, the band ended their set by playing three parts of a much longer number, ‘Mindscan,’ from the Hybrid Child album, then gave us a single encore of ‘Termites’ from the same record.

Progressive Rock often has the unjustified reputation of looking backwards, to the great days of the 70s, but the last few years has a lot of bands emerge who are determined to put their own stamp on the genre and District 97 are a fine example of this. I sincerely hope they come back to The Robin again, and soon. 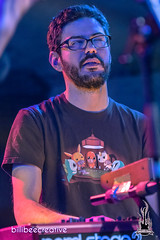 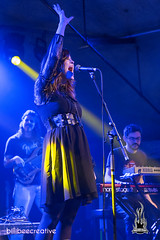 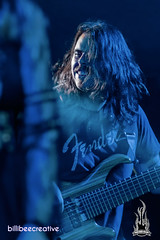 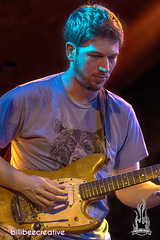 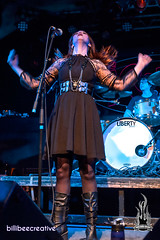 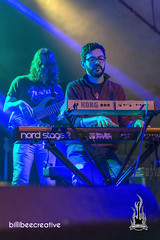 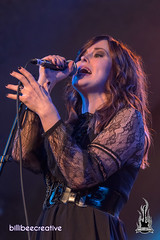 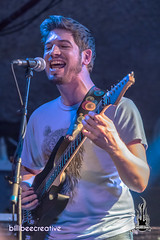 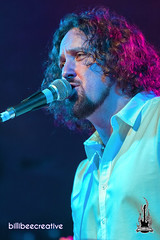 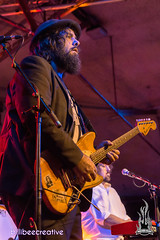 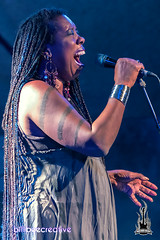 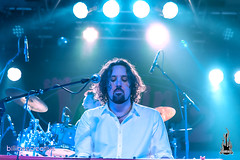 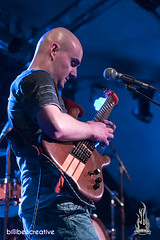 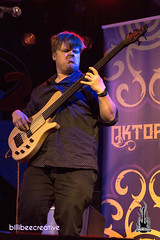 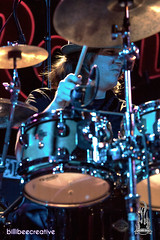 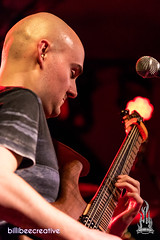