While Dispyt may be a new name to some, the three individual band members may be familiar to anyone whose path has been crossed by the likes of Finntroll and Ondfødt. Although Den ständigt närvarande ångesten sounds nothing like either of those two bands.

Certainly there’s little in the way of the Folk fun that Finntroll are renowned for, while the scorched asphalt of Ondfødt is also notable by its absence. This album was first released a couple of years ago but has now passed through the experienced hands of Immortal Frost Productions, emerging remastered and repackaged and looking certain to gain more exposure second time around.

While Immortal Frost are best known for their Black Metal conveyor belt, Dispyt deliver a much more punk output with a solid crusty top, no doubt in recognition of National Pie Week that passed by recently. The energy, tempo and intent is actually much more redolent of 80s UK anarcho acts such as Conflict and the even more extreme urban warriors, Crass.

Just one song on Den ständigt närvarande ångesten breaks three minutes and most race by in a blur with the dirty dozen done and dusted inside 27 minutes. It’s hard to make much sense of desperate tracks such as ‘I skuggan av självförakt’ and the storming ‘Sommarstaden’ but the raw passion is frightening at times.

The pace is lowered a smidgen on the pounding ‘Va fan vill du?’ while a fuzzed up blast opens the window on ‘Då samvetet tryter’ as Dispyt screech their way through another 90 seconds of aural annihilation. It’s a wonder the drummer doesn’t lose a limb such is the rate of knots in which he attacks his kit but within this insane cauldron of noise some grooves are discernible.

The longest track is ‘Under hans givande hand’ when the pace eases off a notch although the testosterone levels scarcely waver as Dispyt bark their way through three minutes of bruising grooves. The sheer fury and explosion of anger on a song such as ‘Under hans givande hand’ is pure Discharge and throughout the visceral energy that rampages through almost every track should come with some kind of health and safety warning.

The closing title track brings proceedings to a predictably fevered climax after which you may well need to go and sit down until your beleaguered brain cells have reassembled themselves into some kind of order. 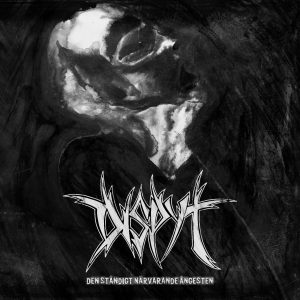