Prepare to be blown away…

Birmingham’s Devilfire is the melodic rock pet project of Alex Cooper and this debut album Dark Manoeuvres has been a long time in the works. It is an extremely impressive debut and the time, effort and love ploughed into this band by main man Cooper is clearly obvious in every department – song writing, musicianship, production and mixing et al. Cooper will be known to many from his work within the local music industry in various capacities including production/mixing studio work. As a musician though he is best known as a drummer but with Devilfire we see Cooper take the frontman role on vocals.

Dark Manoeuvres is a melodic rock album with a dark tone to it, hence the apt album title. It having an overall dark sound won’t stop it from still appealing to melodic rock genre fans as it is heavily influenced and inspired by the genre’s golden era. This isn’t a retro album at all though it has a strong contemporary and modern feel to it and to me is very relevant within today’s burgeoning rock music scene regardless of the inspirations behind its melodic rock core.

The songs are evocative, rousing and inspiring and there is a good mix of flows and energy amongst this thirteen-track juggernaut which never fails to hit all the right spots. Cooper was keen for his songs to connect with listeners and has been an open book with his song writing with many of the songs being deeply personal. Cooper has definitely achieved his desire to create a relatable album that people can connect with, although lyrically diverse it is always connectable. As I’ve stated before songs that I can connect with always have a deeper impact on me and stay with me longer and I think anyone who listens to Dark Manoeuvres will agree with me that it is an album that will never gather dust on the shelf and will be a constant source of enjoyment.

Cooper has a touch of Ian Astbury of The Cult to his vocals and delivery and there is a touch of The Cult to Devilfire, that dark mildly gothic tone for example. Cooper may not beat Vaughn or Soto in the vocal stakes (not many can) but he is really good at conveying the emotion of a song and lyric in the way he wants it to be felt, his raspy gritty angry bites which appear occasionally are particular effective.

Although this is a debut album it’s not a band showing potential or room for growth, Devilfire are at the top of their game as a fully-fledged band with a stunning collection of songs destined to become very popular with rock aficionados. Dark Manoeuvres is one of the most impressive debuts I’ve heard in a while and the band are a welcome addition to the melodic rock scene. If this album doesn’t see Devilfire causing waves and generating excitement amongst rockers there is no justice in the world. Devilfire are the real deal so strap yourselves in and prepare to be blown away. 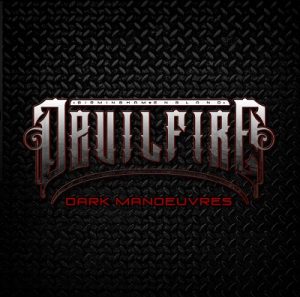