Christcrushing metal of death from Australia…

From their Facebook page: “Christcrushing metal of death from Australia”. Yep, that just about sums up the album. Their first full length release since 2009, Destruktor’s second album is like being beaten repeatedly and without end with a shitty stick with nails encrusted with the shit from a diarrhoea-ridden dingo. But in a good way of course. Destrukor don’t do compromise. A fact well established since their 1997 demo, if 2009’s Nailed confirmed it, Opprobrium intensifies it with gloriously gruesome delight.

The brilliantly titled ‘Priestiality’ opens in true doom-dense magnificence until two-minutes in, black brutality is let loose in a flurry of furious riffs, blast beats, and demonic barks (aka “vocals” in some circles). ‘Beseiged’ chucks a groove or two into the already fustigated fuckery and the battery continues unabated with the hooky riffs and grinding vocals digging ever deeper. Far from a bad beginning. ‘Tyrants Condemnation’, the bass heaving in the low end, brings more of the same bloodthirsty beats and raging riffs and ushers in the remainder of an album of intricately crafted brutality.

‘Immaculate Deception’ and ‘Blood Poison’ prove to be the band at their most intense and ferocious, that is until ‘Eradication’ delivers its short, sharp burst of blackened brutality. But it’s with the near-nine minute epic ‘Forever the Blood Shall Flow’ – an incredible track that reaches into many a dark and diverse corner for its enthralling voluminous violence – to close out proceedings where Destruktor prove themselves once more a formidable bunch of blasphemous and barbaric bastards capable of producing some seriously uncompromising dark stuff. Recommended. 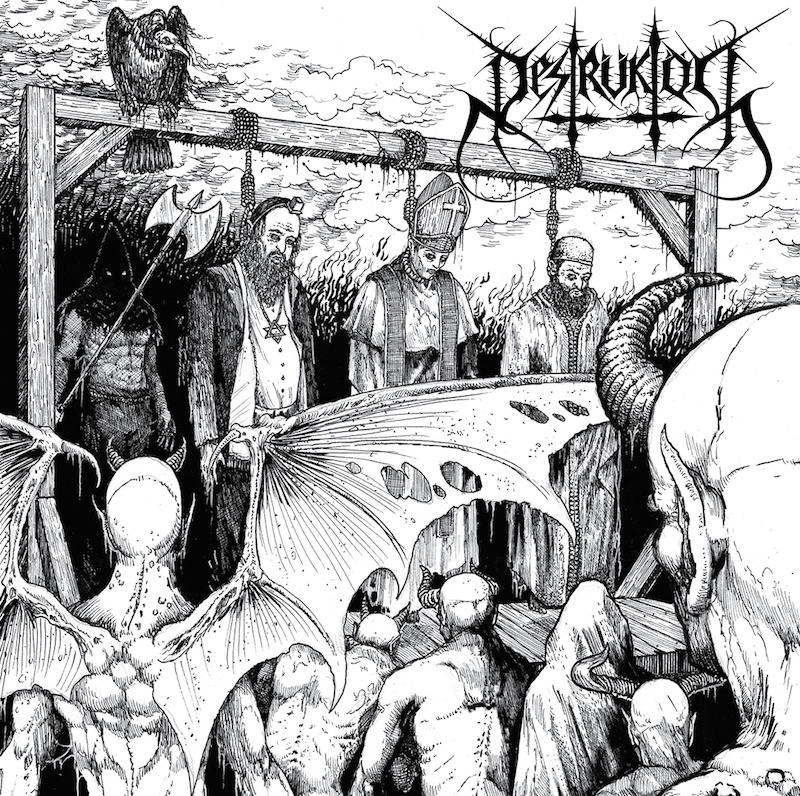