Desperate Measures have been around almost as long as punk itself, and now they’re back with what might just be one of their strongest releases. Formed in the dim and distant mists of the 80’s on Christchurch, New Zealand by Eugene Butcher (now editor of Vive Le Rock magazine). At some unremembered point in time he decamped to the UK and is now based here with his latest line-up of the band.

So, cue ‘Rinsed’. A mini LP, written during last year’s lockdown which sees the band moving in a rockier direction. Opening tack ‘Scars & Memories’ kicks things off in fine style and sets out their stall – a full punky chug leading into a fiery rocking riff which, in turn, leads to a chantalong section before dropping out, only to kick back in for a joyous finale. Done. Dusted.

And that’s pretty much how the album continues. Although we do get an interesting curveball in the form of ‘Flowers At Your Door’. It’s post punky and more than a little bit Goth. Butcher’s gravelly, lived-in vocals give the track some grit while the guitars pummell away. The overall vibe is one of a heavy Lords Of The New Church, or The Mission fronted by Steve Jones. It’s good stuff and hopefully a sound the band will explore further.

We also get two versions of ‘Lost Angels’, the original somewhat lo-fi 1988 demo and a current live-in-the-studio version which is, obvs, heavier and nicely raw and loose – a good indication of what to expect when the band hit the road (which they surely will, it’s where they belong). We end with a cover of a cover (of a cover?) – a bruising, low tech roar through ‘No Lip’, famously covered by the Pistols on their ‘Great Rock ‘N Roll Swindle’ soundtrack.

Indeed, late period Sex Pistols is definitely an influence here. Lacking Lydon’s (then) laser-sharp perception and personality, the band became more guitar-centric, leading to powerchord driven terrace anthems. This is an enjoyable, muscular release which will sound great on stage…which the band will be sharing with The Professionals, a match made in heaven. 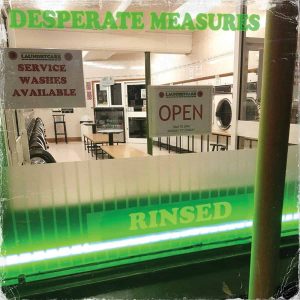