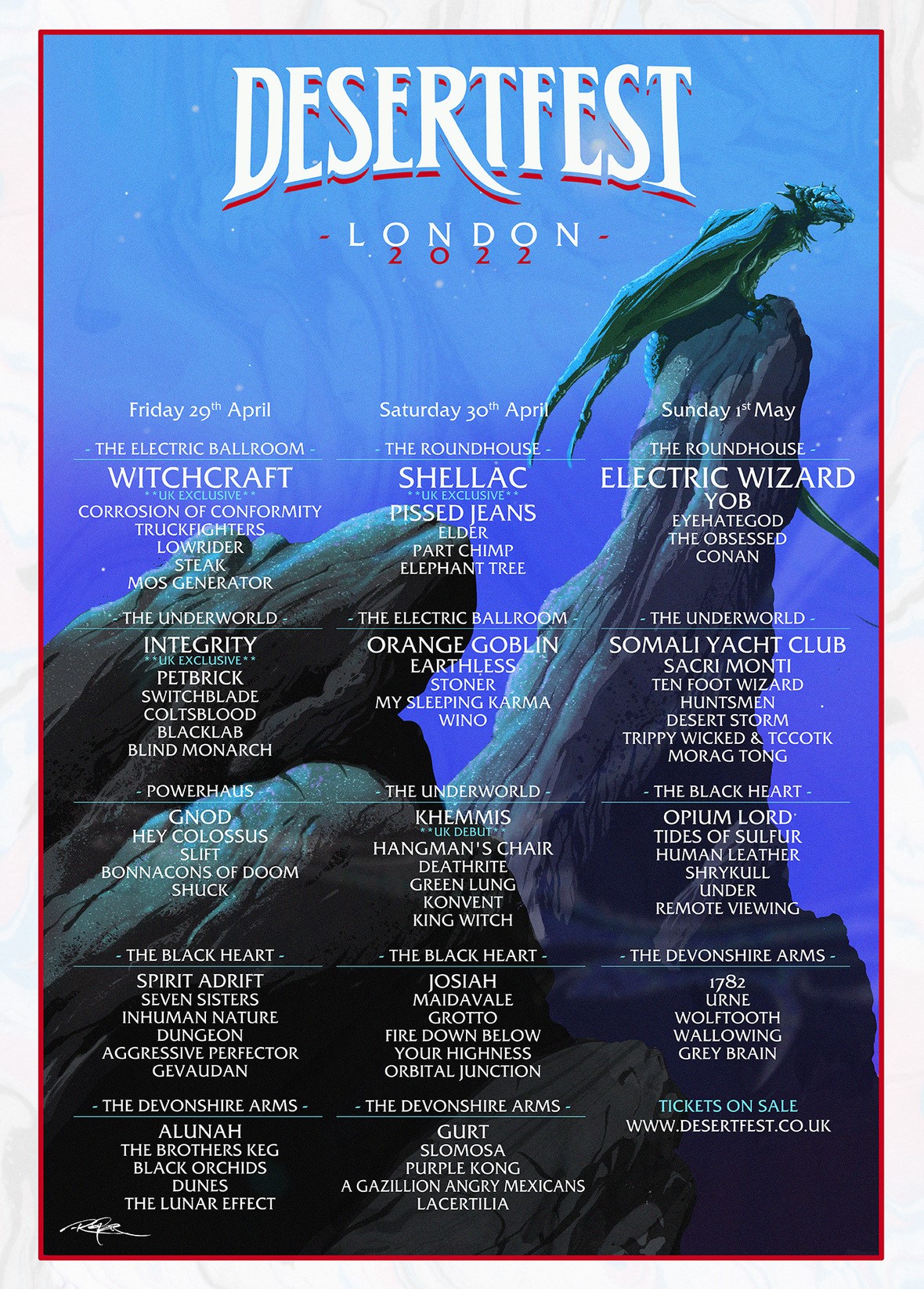 It’s been two whole years since Camden’s most gloomy, doomy and most certainly groovy festival has taken over some of the most best-loved and iconic of venues in North London. Held annually for the past ten years, bar these past two years of plague, Desertfest has developed a cult following.

Over the years, the festival has worked hard to bring us the best in sludge, stoner and doom – as well as dipping its toes into death metal, black metal and and psychedelic hard rock. This year Desertfest seems more diverse than ever, and welcomes two days at the Roundhouse (previously just the Sunday) and a brand new venue in Powerhaus at Camden Market – familiar to some as Dingwalls back in the day. So, dig out your old denim flares, grab anything with a good amount of fringing, and decorate your fingers with skulls and pentagrams – it’s time to return to Desertfest…

As always, Greenland Place is cordoned off to Desertfest punters only. The alleyway that houses the infamous Black Heart (a top boozer for anyone who wants a bit of Sabbath with their Camden Pale Ale), transforms from a slightly dodgy ginnel into one bustling with street stalls. Tattoos are offered on the pavement, fans are being tempted by scented candles and old friends gather outside the doors of the Black Heart scanning their schedules for the weekend.

Things kick off promptly Friday lunchtime at a packed-out Underworld. Sheffield’s Blind Monarch open the festival with their northern doom concoction. These tuned-down and devastatingly slow riffs pack a punch hard enough to make you spew your cornflakes. Shortly following at the Underworld are dark witch doom duo Blacklab, flying in on their broomsticks from Osaka, Japan. Frontwoman, Yuko Morino, is captivating. Her chilling howls wouldn’t be out of place in a horror movie, her long dark hair reminiscent of ‘The Grudge’. The heavily distorted, catchy riffs are grunge-esque, lying somewhere between Babes in Toyland and Alice in Chains. It’s so weird, and so good.

Over at the Electric Ballroom, Swedish stoners Lowrider (pictured below) take to the stage for a UK exclusive. With it they bring with them a brand new album in Refractions – the first in 20 years. Splitting in 2003, they had a brief reunion at Desertfest in 2013, before reforming fully in 2017. Frontman and bassist Peder Bergstrand is quick to praise fans for their patience, this afternoon. It is clear to see that the Electric Ballroom is filled with love and loyalty for this band – this is a momentous psych celebration for the stoner world. 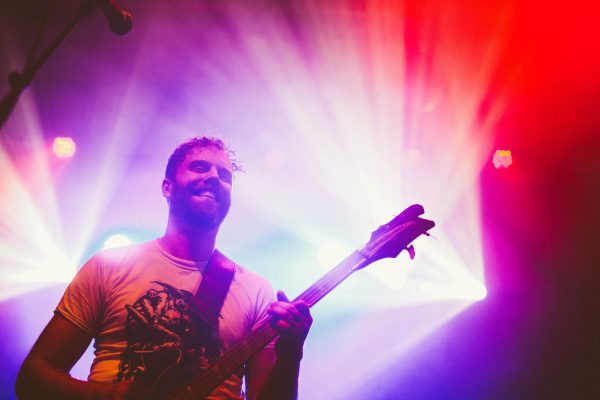 Back at the Underworld, Liverpool’s Coltsblood deliver a vigorous performance. Vocalist John McNaulty, previously of Conan, runs around the small square of stage he has available, bare-chested with a big mop of hair on his head. Switchblade follow on the same stage, hailing from Sydney. But this is a far cry from white beaches and serene seas of Australia; we are truly dragged deep into murky depths as these death metal outfit launch a hard, brutal assault.

Changing up the tone of the room, and concluding the evening with an explosive set are hardcore street punk performers Integrity, hailing from Cleveland. We are not prepared for this so early in the festival. Lead vocalist Dwid Hellion has a Phil Anselmo quality, a voice so gruff than his speaking voice is indecipherable. We all scream and cheer – whatever he is saying. Metalheads are crawling up onto the stage, throwing themselves into the crowd – Hellion just another mate. He lowers the mic into the crowd, fans grabbing on and screaming every word back to him. Guitarist Justin Ethem hitches a ride on the shoulders of a willing victim, launching into the crowd and not missing a single note. It is glorious chaos from start to end. These lads have been going for over 30 years and the energy generated in the room tonight is astonishing.

Kicking off day two at the Electric Ballroom are Slomosa (below), self-identifying as ‘Desert Rock band from Bergen, Norway – the least desert country in the world.’ Their chord-heavy, bluesy riffs ease us in, with a lightness and fun that is almost Weezer-esque. Far from ‘light’ is Konvent, a group of Danish all-female doomsters preaching their witchy agenda to the willing human sacrifices of the Underworld. Haunting riffs, guttural vocals and a fierce attitude – this band is so dark you can barely see them on the stage. Their latest, sophomore album, Call Down The Sun, was released earlier this year and is most definitely worth your time. 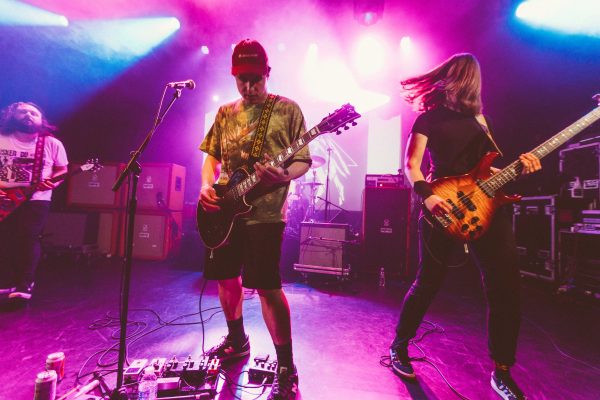 Meanwhile, things are heating up over at the Dev. Small in size but mighty in attitude, The Dev is a must for checking out upcoming bands. Old Horn Tooth are one such, a London trio tormenting the packed-out pub with 15-minute songs consisting of two riffs. One band that would not be caught dead with repetitive riffs are Earthless (below), taking a top slot over at the Electric Ballroom. They aren’t an easy band to take on, with no catchy riffs or high-energy performance. The largely-instrument band from San Diego borders on jazz, rather than rock or metal, with indulgent guitar work and experimental tempos – still, that in itself is an impressive display of skill. 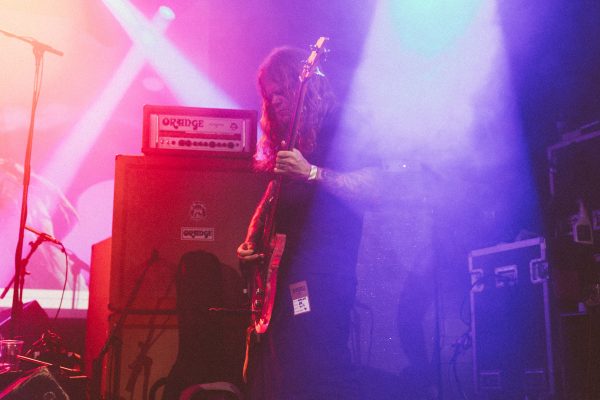 Back over at the Underworld, Swedish stoner-rockers Greenleaf take to the stage. Originally established as Tommi Holappa’s (Dozer guitarist) side-project, Peder Bergstrand’s (also of Lowrider) vocals are bluesy and soulful, paired with groovy guitarwork – this is trance music that lulls you in. Orange Goblin headline the Electric Ballroom this evening with an energetic set which tears up the room – always fun, always eventful – this is a superb way to end the second day of Desertfest 2022.

And before you know it, it’s the final day. The landmark Roundhouse, just down the road in Chalk Farm, is the place to be today with an unbelievably impressive line-up. A hugely diverse and dynamic venue, the Roundhouse houses all manner of artistic creations – able to double as a prestigious vehicle for high-brow theatre as well as a haunting, magic wonderland for the common metal folk.

Doomy Scots, Dvne (below), take to the stage first. This is a wonderfully skilful and complex band, with smooth, flowing guitarwork challenged by the contrasting clean, heartfelt vocals of Victor Vicart and the brutalist growls of Dan Barter. The keys add a whole new dimension (it quite literally feels otherworldly) to their music. Together, the instruments take us up to heavenly climaxes and down to hellish wastelands – it’s a rollercoaster of emotions. 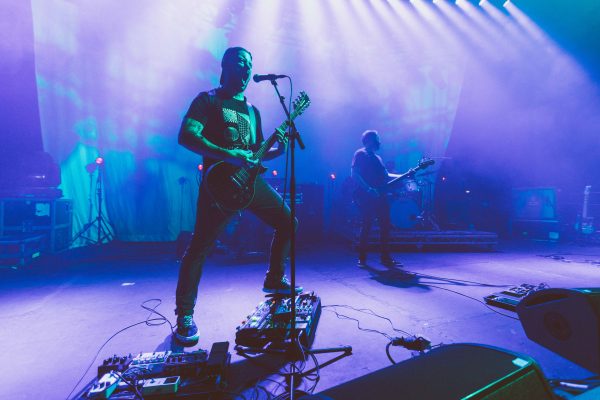 Next up are Conan (below), treating us to a few new songs from their upcoming album. The Liverpudlian’s ease us in with old favourites, ‘Hawk as Weapon’ and ‘Bolt Thrower’, before delving into the much-anticipated new material which is every bit as gut-wrenching and desolate. Jon Davis’ voice is unlike anyone else’s, it’s animalistic and raw; caveman-like. But the thing with Conan is their unbelievably catchy riffs, just try not headbang – that’s the ultimate challenge. Bring on the new album! 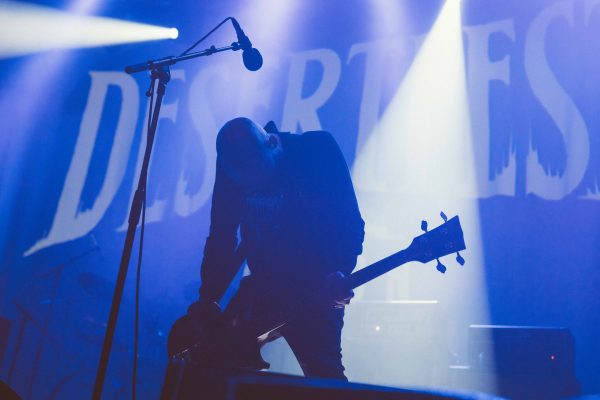 Perhaps the liveliest crowd of the day, perhaps even of the entire festival, goes to New Orleans legends Eyehategod (below). Going now for over 30 years, they are legends of the NOLA scene, alongside the likes of Down and Crowbar. The sludgemeisters released A History of Nomadic Behaviour last year – their sixth studio album. Mike Williams is everything you want in a frontman, casually walking on wearing a backpack, as though he’d just stepped off a bus and stumbled onto a stage. He sports an interesting look – with his shoulder-length hair dyed half black, half blonde. He is full of punkish attitude and ferocious vocals. 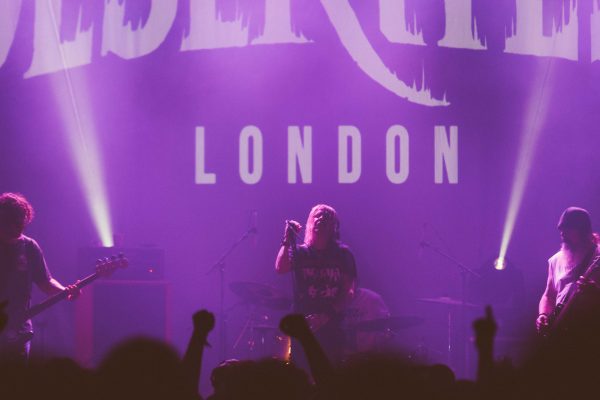 Another band to release a new album are Yob – a remastered version of ‘Atma’, celebrating it’s 10 year anniversary. The doom band from Oregon deliver on the gloomiest riffs – this music crosses over and transcends so many different genres, it feels truly experimental. You become lost in the ups and downs of the narrative. There is no dramatic performance from the band or the crowd, everyone is lost in the notes gliding across the room and bouncing off the walls.

And in the blink of an eye, Electric Wizard (below) take to the Roundhouse stage to conclude this year’s festival. As they step out, with the widest of jeans and the longest of haircuts, we know what we are letting ourselves in for. The bluesy doomsters, transporting us to the 1970s with distorted groovy riffs and soulful vocals, are an unlikely candidate for a chaotic crowd – but that is what they achieve his evening with countless pits and crowd surfers. From Dorset, their mellow seaside vibe shines through in their music, losing themselves on stage in a sea of vibrating string bends. What a great way to end a great festival. 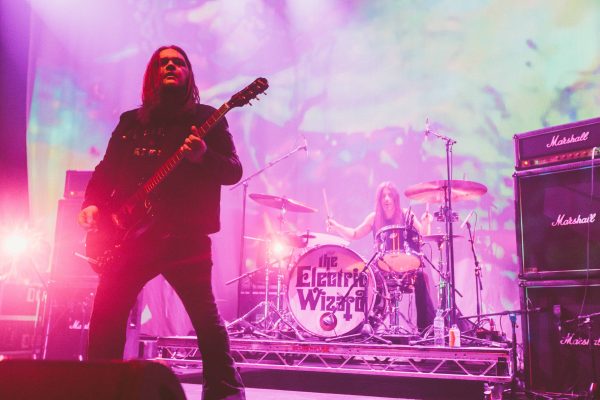