Des Sherwood is one of our own, a Midlands man, from Halesowen to be exact, where he teaches would-be guitar heroes the tricks of their potential trade. That he himself has received a thumbs-up from Ozzy Osbourne infers this instrumental album is worth a listen. However, don’t presume all-out hyper-speed fretboard kneetrembler extravaganzas. Instead, put yourself in mind of a cruising Satriani given a slight British swagger over a series of self-penned non-too long songs all with a lyrical lead line; the titles of which appropriate the emotions wrought out over them. That stated, ‘Bob the Builder’ has nothing to do with the kid’s TV show but does affect a suitably animated industrialised busy-bee feel as opening chords clock in like a punch-card before a searing melody guitar ensues with stacked harmony variation choruses played loudly and repeated enough for you to be whistling along until it suddenly speeds up, frothing in upbeat enthusiasm, as Sherwood shreds sweetly.

If you’re part of a courting rock couple looking for a moonlight sonata on some sun-kissed beach play ‘Jumping Ship’ or ‘Secret Hero’. More up-tempo numbers come with added movie and TV referenced titles and spoken phrases akin to Jeff Beck’s Guitar Workshop period: ‘How You Doin?’ being a real rinky-dinky shuffle with lots of fun runs while ‘You Talkin’ To Me’ is tasty jazz rock but cries out for a keyboard player to confront the guitar lines more forcefully as the supporting instrumentation, sounding programmed, tends towards polite precision.

‘Three Years Into Forever’ opens thoughtfully in classical acoustic mode, then moves between a questioning electrified Jan Akkerman approach and a Beck-plays-Marvin bottleneck exchange with a lovely tender pinching squeal to some of the notes before  heavily thrashed chords belt out and the main theme returns with harmonised guitars. ‘On the Edge’ bears an air of mystery, similarly taking musical detours with unexpected turns of precise phrasing as the whammy bar is held taught. The uncharacteristic ‘Franbelle’ is middle-of-the-road country, albeit catchy, and a clutch of the songs are pleasant but not as  memorable, whereas ‘Slipping Away’ has great piercing anguished singing guitars over a new age Ibiza chill-out sound that screams for a big live production, then moves into a series of bubbly Mark Knopfler-styled phrases before guitars en masse serenade the song towards its climax.

Thematically, The Music Room is a courtship of melodies with the titles of the last two tunes reading as the end of an affair lingering with only good memories. As an album it’s more than just incidental mood music with some excellent tunes played emotionally using rock craftsmanship to pull off those nuances, and while there are some you could argue end too abruptly, the very briefness of the acoustic ‘Missing You’ says all it needs beautifully. 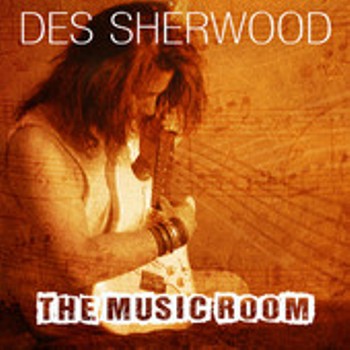