Des Sherwood’s The Music Room was one of the first reviews I did for The Midlands Rocks way back when. An instrumental guitar led album; I was well taken by it. Not via any flashy pyrotechnics on show, more the lyrical melodies that seemed to be reaching out, trying to express something unstated. While there were jovial pieces like ‘Bob The Builder’ the underlying theme appeared to concern an emotional breakup. Some of the titles helped, of course, albeit one often wonders if such things are added as an afterthought.

It transpired I was right, at least in part, as the guitarist got in touch with me, responding positively to the review. Now, a decade later, he’s brought out a new full-length CD in Black Is White that is both tonally unmistakably in the same ballpark, but seemingly delves into other expressive questioning moods – This time round, its titles more oblique, so it’ll be interesting how well I’ve deciphered his intent.

So, what’s Des Sherwood in the time between solo albums? Well, for over 20 years he’s been teaching guitar here in the Midlands. At one time a member of local legends Dizzy Lizzy, he’s played in both cover and original acts, supporting the likes of Dokken, Diamond Head, Skid Row and Uriah Heep along the way. Neither has he restricted his playing solely to rock, having played guitar with top bhangra act The Sahotas, whose single ‘Out Of Reach’ bothered the pop charts and drew even bigger attention over in Asia.

Near misses included almost working with the likes of Ozzy Osbourne, Glenn Hughes and Quiet Riot’s Kevin Dubrow, with all having a good word to say about him, as did some bloke called Sting who used to work for The Police and no less a guitar wizard than Steve Vai. This local lad might not have reached the higher echelons of rock notoriety, but he’s not done too bad by half, with other recording work having included playing six-string on solo albums by Sweet bass player Lee Small and for Tom Galley’s Phenomena series.

And thus, we come to his own second solo release. This time round we are offered ten tracks, the longest lasting four and a half minutes, the others flittering around a minute shorter. In the main, they get in there, say what’s one their mind off their chest, develop that debate a little further, sometimes have some fun with it, at others show off, and leave before outstaying their welcome.

That Mr Sherwood’s influences are Gary Moore and Randy Rhoads remains vividly apparent, and while these studious recordings don’t allow for the wildly extravagant virtuosity some would point to in their work, I would dare suggest that what they undoubtedly had in technical ability is more meaningful to me – imbued as they are – here in a more emotional context.

With a brief introduction where notes are played studiously through a chord, we’re soon tossed along into brisk-while-brash full-on power strokes and a deeper toned melody line that constantly questions. Slowing down with but a minute to go, spoken words are utters, before returning to the main theme before fading without resolution. An interesting philosophical dilemma for a tune titled ‘Black Is White’.

Next up is ‘Division’. Here, like a moonlight stroll along a sandy beach, guitars shift with the tide before entwining, and play out their arguments but never quite reaching conclusion, despite the mathematical, but subtle, precision of some of the phrases when played in turnabout. ‘The Driver’ counters such considerations of debate, taking some of the brisk powering of ‘Black Is White’ and ploughing it forth; chugging down the highway, its phrased melodies seek to find merriment in their journey.

If such is the case, ‘Into The Fray’ plays out as the other partner in this debate. Despite its title, it begins like a lover cast adrift, tender in its expressive lines, drumming effective here, and picking up in both volume and attitude, again as if seeking knowledge, if not wisdom. That it moves between rock, fusion and more electronica moments without bedding down firm with any one genre is one of its beauties.

What the hell ‘NU Vaiolet Satchel’ means I haven’t a clue, and if there’s a typo you tell me where. Musically it rocks harder than the previous tracks, falling into line with the likes of Satriani and Vai in its rock instrumentalism. One the longer tracks, it allows Sherwood to show off, shredding merrily within the constraints of the number.

Who ‘Michael’ is we may also wonder. Ballad like in form, scribble some words out and autotune some kid mumbling the words and you’ve got a pop tune, further soling takes us into a more 80s power ballad form, before moving progressively and again acting questioningly in its main melody.

‘Y.B.F.’ is a power-popped funk rocker, that is one minute Frank Zappa and the next Niles Rogers in playing. That it’s also interjected with sneezes and fart noises somehow works. To follow it with ‘Elsa’, who we might presume to be the guitarist’s muse (she’s first among those thanked on the CD’s line notes) is a bit odd, but the song itself comes across as the emotional catharsis we’ve been leading to – If as I now perceive the musical narrative thus far has gone beyond questionable face values and a search for spiritual peace.

Slow sustained bass notes lead us in a slow dance, as guitars caress and find a happier resolution where the earlier ‘Division’ could not, a frothier high-toned lead line taking us towards conclusion. ‘Hope’ drifts in next, dreamily at first, proud and loud as it pours a more triumphant anthemic solo, over other contemplative harmony guitars, before rocking out in speedier conclusion.

At only just over a minute long, ‘Handsome Jack’ is not so much a coda to the work as a whole, as a peaceful summing up of the emotive experiences that have been portrayed. That it is a piano solo after all this mild-mannered guitar wizardry ensuring it captures the ear all the more attentively. Veering towards the melancholy (of which I am apt to wallow in) it steers towards the edge, but does not falter, and possibly more so than the so-titled ‘Hope’ offering emotional redemptive validation.

Well-recorded, precise in its clarity, here on record Sherwood’s fretwork is exemplary in tone and phraseology, though possibly a little tame for the harder-edged rocker. For those who value a good tune or two, they’ll not go far wrong. I still The Music Room quite frequently, and see no reason Black Is White won’t follow suit. 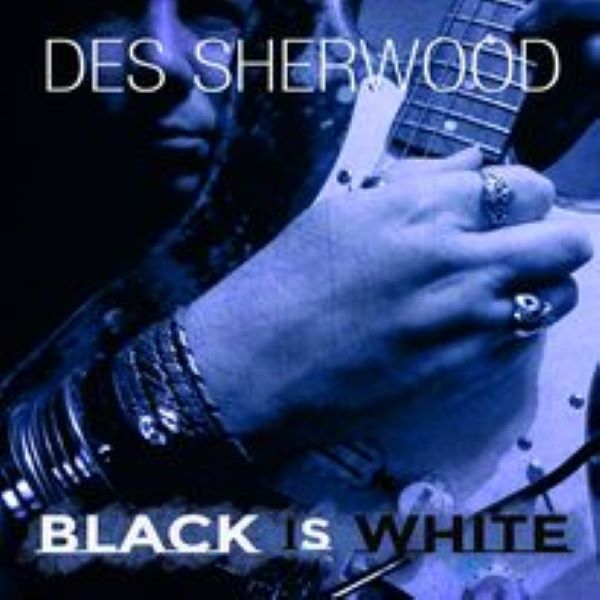