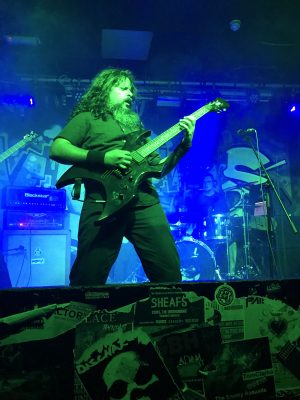 It’s a quiet September evening in Stoke-On-Trent. The city centre is all but deserted. On a small inconspicuous corner of the city, two Indians, a Brit and a Latvian drummer prepare to unleash fury on The Underground.

Demonic Resurrection must surely refer to the UK as akin to a second home with acknowledgements from the Metal Hammer Awards and triumphant appearances at Bloodstock in 2012 and 2018, the latter which scored them the milestone of a giant circle pit and scores of new fans. So when the Dashavatar tour came around, we just knew we needed to be there. It’s their first trip to the city that gave birth to Slash and Lemmy and though the turnout is dishearteningly small for a band this talented, Sahil “Demon Stealer” Makhija and band mates are unphased and enter the stage as though they’re headlining Download. It’s an approach that pays off as they’re rewarded by a die-hard crowd who they have firmly in the palms of their hands for 90 minutes of intimate death metal bliss. Hello, no security and no barricades. 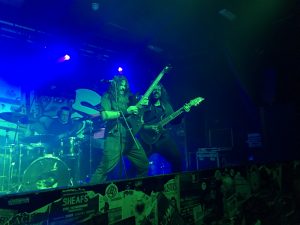 Billed as Dashavatar II, it’s no surprise then that the band kicks-off with the mighty Matsya: The Fish, the opening track off the 2017 album straight into Krishna: The Cowherd.Those in attendance can only marvel  in awe at the technical intricacy of each note played – whether its Demon Stealer and  Vigneshkumar Venkatraman trading guitar squeals or, Rodion Belshevits proving you don’t need an over the top fort  (like Portnoy) to throw down serious carnage on the drums – especially during Death, Desolation and Despair and The Demon King. The mixing made The Underground sound legitimately like the Symphony Hall. It’s rare to see bands playing these venues who get the sound anywhere close to clear but Demonic Resurrection proved it’s very possible.

What’s great about this show is the fairly even representation across the bands back catalogue of albums – they’re one of the few that’s managed the find the perfect balance between older and newer material – much to the delight of the crowd. All that’s missing for A Tragedy Befallen is a huge wall of death when the intro kicks in, but Stoke’s headbangers down the front more than make up for it. The touches of symphonic metal dashed throughout the song sound spectacular as do Demon Stealers vocals. They’re doing nine shows back to back with no rest and half of the shows have already taken place, yet the contrasting cleans and harsh death growls still pack the punch and then some.

In between songs the banter is first-class. From liking steak medium rare through to Brexit, through to the prospect of being stuck in Stoke and possibly having to open a kebab shop. We also have to mention the “Stoked” on Stoke quips which we don’t think we’ve ever heard another band mention before (which is ironic as it’s a genius line that we may just steal ourselves.). Demonic Resurrection draws the evening to a close with one final death metal blast in the form of 2010’s The Unrelenting Surge of Vengeance. The time signatures are off the wall crazy but the band barely breaks a sweat. 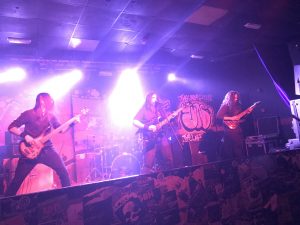 And just like that, no sooner has their set finished is the band is back amongst the crowd at their merch table as loyal fans help them get to the next cities on the tour. Demonic Resurrection is a band that deserves to be headlining the academy sized venues (at the very least) and if there is any justice in the world they will one day get to scale the heights they truly deserve. This is why we need to support the scene because if we don’t, we’re going to lose out on insane talent like this. And that’s just wrong.

Encore:
The Unrelenting Surge of Vengeance