If you ask most people of a certain age what they associate Raleigh with they will hanker wistfully back to the days when young ‘uns spent most of their time pedaling like Lucifer rather than sitting square eyed in front of a smorgasbord of screens. But let’s not get too sidetracked here. So put your Chopper away and instead turn an ear in the direction of Demon Eye, who of course hail from the North Carolina city of Raleigh. Tempora Infernalia is their second album and may I suggest you pump your tyres up, get on your bike and head down to Our Price Records (oh no, drifting away again…) This new Demon Eye release comes to us via our friends at Soulseller Records, currently home to a plethora of talented musical protagonists, among them Mist and Gorgoroth.

Tempora Infernalia follows quickly on the heels of last year’s acclaimed debut release, Leave the Light. Well the light is certainly burning more brightly than ever here. Leave the Light also included some tracks from an early EP so Tempora Infernalia is in fact the band’s first album to consist of entirely new material. This sophomore release is bursting with warmth, spirit and tenacity, accentuated by more grooves than you’d find at a middle age women’s botox convention. It cascades down over you like a special secret waterfall. It’s infectious and you’re likely to catch it but inoculation is not required to indulge yourself with this hallucinogenic tablet of joy.

Ironically for a record so full of life, much of the lyrical content circles around apocalyptic visions of a world on the brink of destruction. With Demon Eye in tow even this doesn’t seem overly troubling. The album was recorded and mixed by Alex Maiolo at Seriously Adequate Studio in Carrboro, North Carolina and mastered by Pete Weiss at Verdant Studio in Southern Vermont. Erik Sugg has a delicious warmth to his voice that elevates Demon Eye above some of their less challenging contemporaries, Led Zeppelin like in many ways, with Ozzy’s DNA also within touching distance.

The 70s vibe is prevalent with the ruby red riffs forming kaleidoscopic pictures in your mind. Even the band’s name descends from a Deep Purple song. For more current reference points, Kadavar, Graveyard and Clutch will all take you down the right path. But at no point does Tempora Infernalia appear in any way stale or dated. On the contrary there’s a youthful energy and freshness to it that connects right from the opening number, the single ‘End of Days’.

Bluesy in sound and appearance, Demon Eye become notably darker and doomier on ‘Poison Garden’, something of a slow grower in every sense. The most atmospheric song is the simpering ‘Please Father’, a softy meandering track, almost haunting like in its simplistic beauty. Last of the 10 tracks is ‘Sons Of Man’ which sends the spirits soaring once more with some bewitching hooks before a fuzzed up melee ensues with Erik riding the pulsating rhythms. Anyone feeling short-changed by the overhyped Mayweather-Pacquiao bout should seek solace in Tempora Infernalia. It certainly carries more punch. 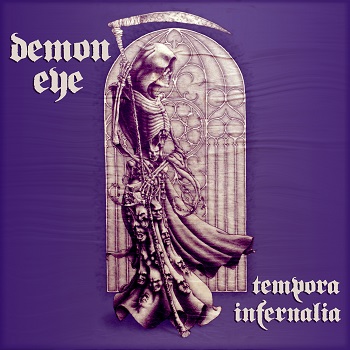