Since 1987, Deicide (known as Amon between 1987 and 1989, as if you didn’t know) have been brutally, ruthlessly, unremittingly, remorselessly slamming the father, the son, the holy ghost, and the ever-swelling horde of followers that incessantly sing the praises of their apathetic, soulless deity. But it appears that the bastard’s not quite dead enough because here we are, twenty six years later and it’s business as usual for these deity destroyers as they return with album number eleven, In The Minds Of Evil.

In-keeping with their discography, at thirty six minutes, this is short and not-very-sweet-at-all. The title track provides the customary Deicide traits: trem-picked riffs juxtaposed with ten-ton hammer slamming chugs, slick lead breaks with Slayer-esque dive bombs, Asheim’s characteristic ruthless approach to the kit, and Benton’s gravel-grinding vocal this time sounding fierce and fortified by fire. ‘Thou Begone’, with some cool harmony guitar work and an Eastern flavour to the lead as well as Benton’s bass stepping forward to work with the guitars, maintains the brutality, the track shifting into the high gears pretty quickly. ‘Godkill’ is merciless, as is ‘Beyond Salvation’, the former distinctly old school while the latter more akin to the style of their previous record. Other than reinforcing Deicide’s outright refusal to do anything other than stick to their guns, ‘Misery of One’ – as well as later tracks ‘Trample The Cross’ and ‘Fallen to Silence’ – retains the vehemence of the album but feel more like filler. But ‘Between The Flesh And The Void’, with its maniacal guitar refrain and demoniac lead work, is easily a contender for best track, and, along with the two closing tracks, rescues the album from what could have been a significant plunge into mediocrity. So yep, it’s another slab of Deicide doing what Deicide do: blasphemous, brutal, and blunt death metal.

As far as where this album sits in the band’s discography, to dismiss this as the band going through the motions would miss the point. Deicide aren’t going anywhere. They don’t have to. It’d be unnecessary, foolish even, for Deicide to change their sound or attempt to incorporate more modern elements into their sound (take a listen to what Six Feet Under have been doing lately with Undead and Unborn for a prime example of such folly). Sticking to their guns is what suits Deicide. Just ask anyone at your local church and see how they run. 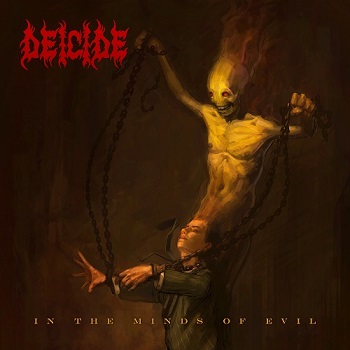