In a scene that often-courted controversy and pushed the boundaries of perceived “decency”, American death metal band Deicide were perhaps the most controversial (and that’s certainly saying something). Throughout a 35-year career they’ve raised heckles with Satanic, anti-Christian and blasphemous antics, and it would have been easy for these actions to overshadow their music. Yet, such was the strength of their material that their first two albums are amongst the biggest selling death metal albums of all time. Crucifxation: The Early Years compiles those two albums along with a rare demo collection to chronicle the beginnings of a true death metal institution.

When Deicide’s eponymous debut dropped in 1990, its level of technical brutality threw many a reviewer in a hex. I remember a contemporary review in Kerrang! magazine which awarded Deicide a paltry two K apportion, along with an inane quip about the killing of music (“deicide” means the murder of God). Thankfully, metal fans ignored the press and purchased this album in their droves and were rewarded with the perfect summation of what made death metal so appealing to legions of disenfranchised youth (and appalling to mainstream society). In 1990 Deicide’s contemporaries released their albums in brightly coloured, almost comical sleeves, but that which housed Deicide was far darker, which instantly gave the band an air of intrigue and more than a hint of danger and sent a clear message that this would be no ordinary extreme metal offering.

The sounds of hell’s gates open and closing bookend the record, and in between we get some of the sickest sounds known to man. Over the course of 33 minutes the band blast through 10 razor sharp songs that are the very epitome of ferocity, and in terms of face-melting riffage Deicide could easily rival Slayer’s Reign In Blood. Opening with ode to the Manson Family, ‘Lunatic Of God’s Creation’, Deicide set about pummelling the listener with Steve Asheim’s insane blastbeats and the tag team of siblings Brian and Eric Hoffman delivering a series of glass-cutting riffs. The Hoffman brothers also introduced a new type of solo; like a planchette moving erratically over a Ouija board their guitar work on tracks such as ‘Oblivious To Evil’ is simply spellbinding. However, it’s bassist Glen Benton who gave the band their edge, and his vocals (with no effects) are truly terrifying and sound as if recorded via a microphone dipped into the depths of hell.

With not a duff track to be found, Deicide set the standard for others to follow, and its influence transcended death metal, going on to inspire the nu metal movement, and Slipknot in particular.

While many bands would mellow out somewhat after an extreme release (think South Of Heaven) Deicide took the opposite route on their sophomore album, Legion. Just when you thought things couldn’t get much heavier, this Florida mob further pushed the bounds of extremity. After a suitably Satanic introduction, Deicide got straight down to business with the white-hot furnace blast that is ‘Satan Spawn, The Caco Daemon’, and it found the band honing their skills into a fine laser beam. Named in honour of Glen’s newborn (charmed, I’m sure) ‘Satan Spawn…’ has everything amped up to the max; the blastbeats are ferocious, the riffs are crisper and Glen’s guttural growls deeply demonic. The result is an album that’s at once familiar and strange; it could only be one band pouring from the speakers, but Legion’s technicality makes its predecessor seem almost pale in comparison.

Once again producer Scott Burns was at the helm, but he outdid himself this time. His work on this record can only be described as bombastic, and while the needles are constantly veering into the red, it is never to the point of distortion. Those electrocuted eel solos are still as sharp as steel, and the bass is placed prominently in the mix, and in tandem with Steve’s drums gives the album its punch. As with Deicide, it was housed in a dark sleeve which introduced us to Deicide’s symbol; the Trifixion (two pentagrams and three inverted crosses) and was honoured with its own song (‘Trifixion). Legion is devoid of any filler or excess fat; and each track goes for the listener’s throat like a rabid hound, and while some might bemoan the brief running time (a mere 29-minutes) the number of ideas the band have thrown into the cauldron makes it seem far longer.

The technical aspect of this album was something the band had difficulty reproducing in the live environment, and only ‘Dead But Dreaming’ has been a mainstay in their set. But in the pantheon of death metal albums, Legion takes centre stage.

Deicide originally formed under the moniker Carnage, before the arrival of Glen Benton and a name change to Amon. During that period, they released two demos which were later collected as Amon: Feasting The Beast at the height of Deicide’s popularity. This disc doesn’t run concurrently and begins with Amon’s second demo Sacrificial which dropped in 1989. This set works precisely because the versions contained within are markedly different from those which would later appear on Deicide. One noticeable difference are Glen’s vocals, they are less gruff and harsh than they’d become, and you can actually make out the words on ‘Lunatic Of God’s Creation’. Sometimes things veer towards thrash metal (‘Crucifixation’) yet they’re no less powerful for it, and you get the feeling that Deicide are sharpening their tools ready for their assault on American culture.

The final four tracks on this disc take us back to the band’s genesis and 1987’s Feasting The Beast demo. These cuts have a rudimentary charm, and while Sacrificial gave the impression that it was recorded in a professional studio, Feasting sounds like it was captured direct to a boombox. Paradoxically, these tracks are much more death metal orientated than those found on Sacrificial, and they’re much more horror influenced, not only lyrically, but musically too, and ‘Oblivious To Nothing’ seems to lift its intro straight from the Jaws soundtrack. While this third disc doesn’t have the same visceral power as the others, it offers an intriguing glimpse into the band’s formative years.

Deicide are perhaps death metal’s most controversial band, but when you look beyond the inverted crosses branded on foreheads, the claims of animal sacrifice and asinine comments on suicide, your left with some of the genres very best music, as Crucifixation: The Early Years proves. 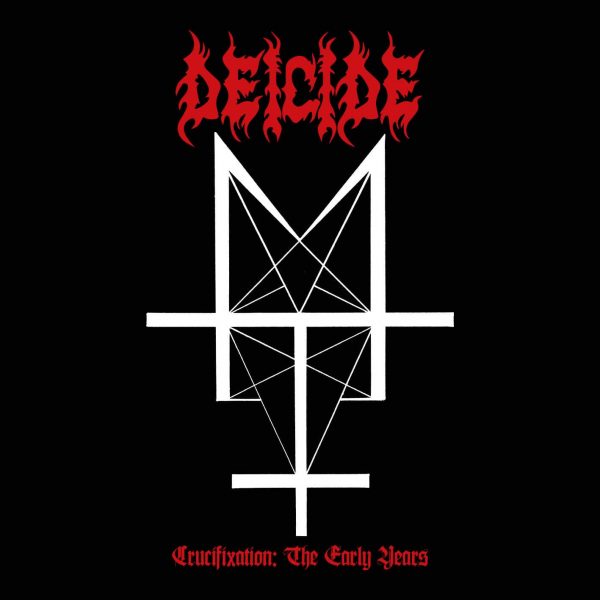