On August 5, UMe will reissue Def Leppard’s multi-platinum selling 1992 album Adrenalize and 1999’s Euphoria on vinyl. This marks the first time Euphoria will be available on vinyl outside of 2019’s The Collection: Volume 2 box set. Both Adrenalize and Euphoria can be ordered, HERE (Adrenalize) and HERE (Euphoria) 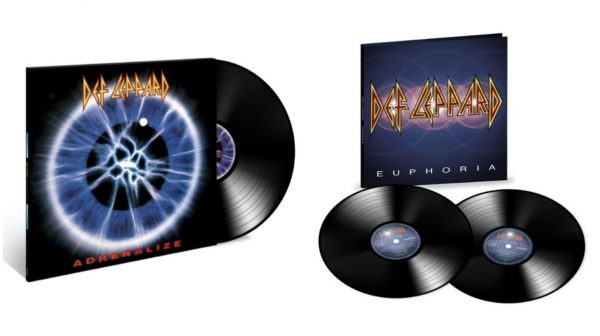 Def Leppard’s multiplatinum selling album Adrenalize was released in 1992 and went straight to No. 1 on the Billboard 200. The album features the Top 20 hits “Have You Ever Needed Someone So Bad” and “Let’s Get Rocked,” and “Stand Up (Kick Love Into Motion),” which remained at No. 1 on Billboard’s Mainstream Rock Airplay for five weeks.

SIDE TWO
Stand Up (Kick Love into Motion)
Personal Property
Have You Ever Needed Someone So Bad?
I Wanna Touch U
Tear It Down

SIDE ONE
Demolition Man
Promises
Back in Your Face
Goodbye

SIDE TWO
All Night
Paper Sun
It’s Only Love

SIDE FOUR
Guilty
Day After Day
Kings of Oblivion