It takes me a while to find the O2 Academy in Islington this evening; obscurely located on the periphery of the Angel Central mall, so its feels as though you’re embarking on a shopping trip in North London rather than a brutalistic fantasia.

Once I have overcome this obstacle, I enter to the bass-heavy sound of Horsham’s Dyscarnate just starting to kick up a duststorm. The trio have been producing riff-heavy death metal since the early 2000’s and have three full-length albums under their belts, most recent of which is With All Their Might in 2017. The set begins with a pre-recorded doom sequence, with drummer Matt Unsworth sitting solo, teasing the snare like a snake charmer.

Co-vocalists Tom Whitty and Al Llewellyn storm the stage with tuned down monstrosity. Llewellyn, the only non-original member, plays his bass with eye-catching speed whilst Whitty brings a sackful of thunderous riffs. Catchy death metal does not come around that often, but considering the amount of people singing along to each and every song tonight – particularly ‘Cain Enable’ – Dyscarnate are certainly that, and prove an ideal precursor to tonight’s main metal meal. 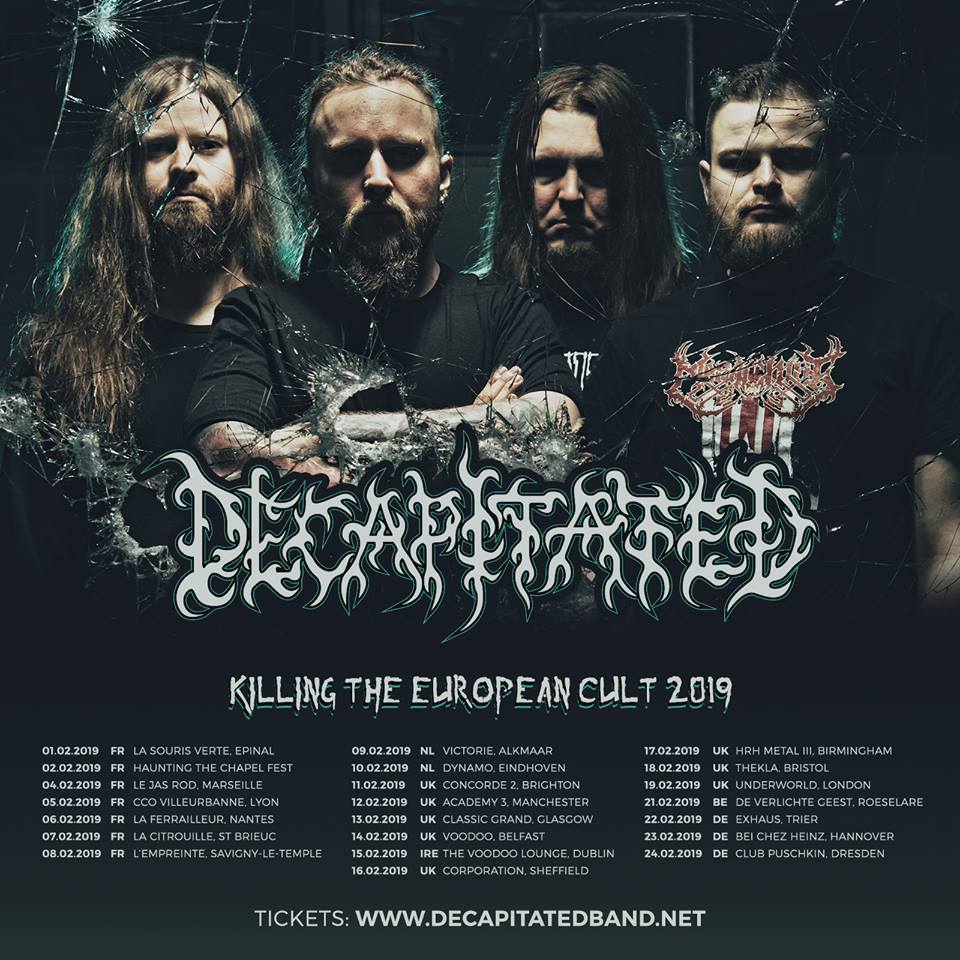 Decapitated return to the fray after their well-publicised period of turbulence in a US courtroom from which the Polish giants eventually emerged. Anyone fearful that the legal shenanigans may have in some way dulled their appeal have little to worry about. Originally they were booked to play The Underworld on their London date only to be upgraded to the larger Academy once the clamour for tickets became clear.

Decapitated returned to what they do best in July of last year when unleashing a video to the almighty and undeniably catchy song ‘Kill the Cult’. Thankfully this is played with intensified energy this evening – this is their comeback anthem and they want you to know it.

Vocalist Rafał Piotrowski is as captivating as ever, with the admirable ability to connect with the crowd without actually saying very much. His conversation is kept to a minimum, but the show is shrouded in subtle finger points, thumbs up and a deathly stare to accompany the head-bobbing – as though hypnotising all to join his bloody ritual (as if we need persuading!).

You can’t help but be consumed by Rafał’s remarkable dreads which trail down to his knees and sweep the floor with every headbang. The band move further and further into a technical metal sound, with psychedelic sound effects accompanying a blinding light show. The grooviness of the riffage is what has kept the Poles at the forefront of the genre for almost 20 years. The crowd is unrelenting tonight and as the likes of ‘Blood Mantra’, ‘Homo Sum’ and ‘Amen’ smack off the walls, so do they. A moshpit that stretches from wall to wall is a moshpit to remember. Tonight marks the final UK leg of the Killing the European Cult tour, and Decapitated regularly look out across the Academy floor in jaw-dropping awe with appreciation. A great night all round.