Spain is probably not the first port of call you may conjure up when thinking of death metal badlands. Maybe so, but don’t mutter it within earshot of Decapitated Christ. Not only do these sacrilegious swineherds play death metal, but they do it very well indeed. Arcane Impurity Ceremonies is the Spaniards’ fourth album, released through the Prolific FDA Rekotz, whose stable of death metal hordes takes some beating.

Decapitated Christ frontman Paingrinder is well named as that just about captures the essence of his barbed and battered vocal delivery. This is old school stuff, think Obituary and Deicide, but sounds anything but old hat. The abrasive attitude sets the tone for some crushingly heavy interplays.

Arcane Impurity Ceremonies opens with the fast-paced instrumental ‘And the Carnage Begins’ before Paingrinder announces his entrance with some guttural growls on ‘The One Who Marches Behind The Line’ in which some thrashier elements get thrown into the mix. ‘Human-Eating Herd Of The Damned’ has the pounding punishment that death metal fans live for, Paingrinder in full menacing flow, with some infectious grooves thrown in. A battering ram approach from the drummer kicks ‘Hell’s Everything’ into action and it quickly develops into yet another sacrilegious slab of brutality from Barcelona.

Possibly the finest track here is ‘When War Brings Glory (Cenotaph 666)’ which is real trench warfare stuff, blood and guts and despairing cries. This one slows down in places so Paingrinder’s usually indistinguishable offerings can, with a finely tuned ear, just about be deciphered… but don’t let that put you off. ‘Hexenhammer’ is introduced with some vitriolic verbals of Barcelona blasphemy that you’re not likely to hear repeated in your local church on a Sunday. This is real satanic savagery from the Catalan catacombs of evil with some vicious guitar solos darting in and out of the mayhem.

With the heaviness now starting to reach backbreaking proportions Decapitated Christ maintain the momentum with ‘Those Who Walk Slowly’ which carries the trademark elements of your old school death metal, a rabid crushing beat, pounding drums and tarmac-tongued vocals. Final number ‘Ancestral Rites Evoking Primigenium Horrors’ opens with a great beast of a riff, the track getting ever more incendiary before finally some melodies are allowed into the maelstrom but without the hellish flames ever in danger of being extinguished.

Decapitated Christ aren’t in this to win any prizes for originality. That though is in no way to detract from the dynamism and devastation captured on Arcane Impurity Ceremonies. Technically, the Spaniards answer all the questions asked of them and the songs have enough layers and twists to keep boredom at bay. Even the most demanding of death metal fans.are unlikely to feel time in the company of Decapitated Christ is badly spent. 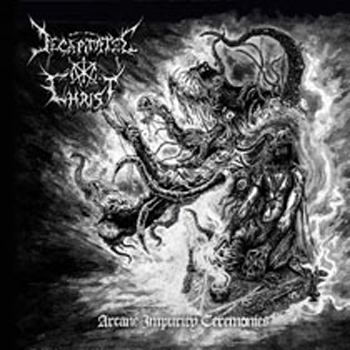