More muck from the death metal depths. From Vic Records come two new releases from Gluttony and Violation Wound, from Unspeakeable Axe Records we have the new album from Sabbatory, and from Relapse Records comes the latest from Death Destruction. Read on…

Gluttony – Beyond the Veil of Flesh

Gluttony aren’t the most original sounding death metal crew to have come out of Sweden but what they do, they do well. First up, they’ve got a new vocalist in Magnus Ödling, formerly of respected compatriots Diabolical. The mighty Magnus has replaced Johan Jansson who bade farewell to Gluttony over distance-related issues that made things a little untenable. They’ve only been together for a little over a year which makes Beyond the Veil of Flesh a pretty decent debut release.

Gluttony cram eight blitzkrieg fireballs into around half-an-hour’s worth of uncompromising death metal. With tracks like ‘Raise The Dead’ and ‘Eaten Alive’ the content follows the gore-filled template for sick to the floor savage death metal. Gluttony don’t quite manage the barbaric blasts of the likes of Cannibal Corpse and Vomitory but they still serve up a plateful of maggot infested rotten death metal meat.

For a debut release Beyond the Veil of Flesh is a solid strike and numbers like the throbbing ‘Coffinborn’ will give your neck muscles a pretty solid workout. Final song ‘On The Slab’ is another zombie chasing crusher, with some great blood curdling riffs thrown in against an incessant pounding rhythm. Old school mayhem for diehards. 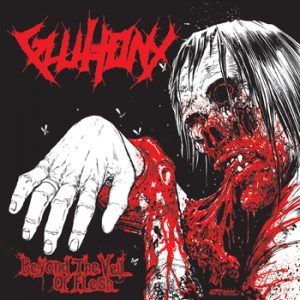 The members of Violation Wound have the kind of CV that would make them the envy of plenty of bands. The driving force is Chris Reifert, whose career has so far taken in Death, Abcess and Autopsy. Up until now Reifert has really been best known for his undisputed talents behind the drum kit. With Violation Wound though he kicks the stool into touch and takes over the vocals with guest guitar contributions from Autopsy duo Danny Coralles and Eric Cutler.

Despite the impressive metal family tree Violation Wound are punk to their core and what we’ve got here are 18 (count ‘em!) blitzkrieg tracks that still comes in at only around 25 minutes. Average song length is a couple of minutes and Reifert opens things up with a curt ‘Hello Fuckers’ before Violation Wound pummel their way through a Ramones style ’Don’t Believe It’. It’s soon apparent though that Violation Wound lack The Ramones’ wit and originality. And of course 40 years or so since the birth of punk this does sound pretty dated and less than inspiring. There are a couple of standout tracks such as the raucous ‘In My Veins’ but on the whole these 18 songs takes some getting through. 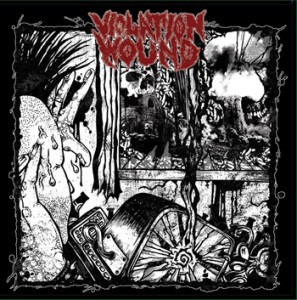 Endless Asphyxiating Gloom is the debut full length release from Canadian crushers Sabbatory. The band has a couple of personnel connections to fellow Winnipeg warriors Besieged, who incidentally are also labelmates on Unspeakable Axe Records. This impressive debut suggests Sabbatory are now sufficiently confident to stamp their own authority on the Canadian extreme metal scene. What you get with Endless Asphyxiating Gloom is a fistful of old school death metal tinged with elements of hardcore punk. The album’s opening track features some fevered drum action straight from the late 70s punk scene but as you move deeper into the album there are plenty of other styles to tide against any dangers of boredom.

The Canadians are happy to mix things up, slowing things right down on numbers such as ‘Hypnotic Regression’ and the album’s title track, before speeding off again on a rabid riff mission like a boy racer with the cops in pursuit. Vocalist Kier Keating has a pretty good tone in his voice and his growls serve Sabbatory well with a lyrical content that includes the usual DM diet of death, blood and lots of guts. Final track ‘Orbiting Obscuron builds from a doomy rumbling riff, broken by Keating’s guttural cry to the darklords, before it kicks into overdrive and starts snapping away like an unruly pup. A solid opening shot from Sabbatory 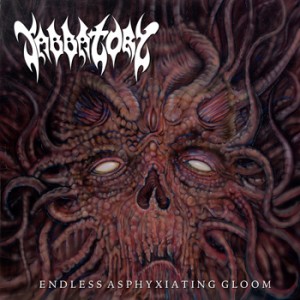 II is the less than inspiring title of the second album from Death Destruction. Unfortunately early reservations are confirmed by the slightly mixed up content served up by the Swedes. Opening track ‘Divine Justice’ resonates with Lamb of God-style kicks, reminiscent of the Richmond rednecks in terms of both vocal delivery and musical style. The following ‘Dead Pilot’ sees a slight change of direction though, with some softer clean vocals at the start and sporadically sprinkled throughout. The occasional roar and power chorus almost gives it a Killswitch Engage feel. At this point my enthusiasm is dented further as the sound starts to stir early 90s memories of some now best forgotten nu metal acts. By the time the fourth track ‘Towards the Light’ is in full flow we’re entering big ballad territory much beloved of the likes of 5FDP.

The overall sound just becomes far too wispy and poppy for any serious death metal nut. While prepared to accept the occasional well thought out deviance from the path, Death Destruction seem intent on going down so many conflicting avenues they’re in danger of going up their own back passage. To be fair to DD, they’ve chosen their own style rather than hitch a ride on the train that has carried forth too many quality Swedish bands to mention down the years. Unfortunately what you end up with is a patchy effort lacking depth, darkness or dexterity. 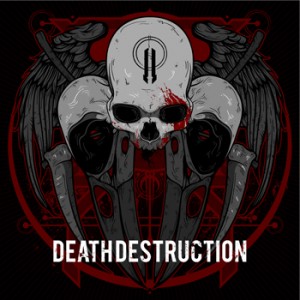