Death have always been viewed as among the most iconic of death metal bands so it’s no surprise that Relapse have been busy reissuing their back catalogue. Leprosy was Death’s second album, released in 1988, and while Metallica and Slayer were also big players back then, Death’s sound was among the most brutal around.

One thing Death don’t sound a quarter of a century later is jaded. The incendiary anger is as tempestuous and tortured as ever and tracks like ‘Left to Die’ and ‘Open Casket’ spill over with just as much hatred as when they were first penned. The trademark riffing rage alongside some bubonic blast beats and the distinctive vocal barks of the late Chuck Schuldiner remind us why Death were so formidable at their peak. When Chuck barks out the chorus of ‘Pull The Plug’ you want to be right beside him pulling the damn thing! The second disc consists of previously unreleased rehearsal recordings which by their very nature sound rougher an Easterhouse christening. If you go with the limited three-disc package you’ll also get the live disc containing a recording of a New York gig, circa ’88 along with a 24-page booklet.

Cruelly ‘The Father of Death Metal’ as Chuck was widely acclaimed, died from Cancer in 2001, aged 34. The entire album has been remastered by Alan Douches (Nile, Mastodon) and one thing’s for sure, Leprosy shows just why Death’s claims to a seat at the top death metal table remain indisputable. 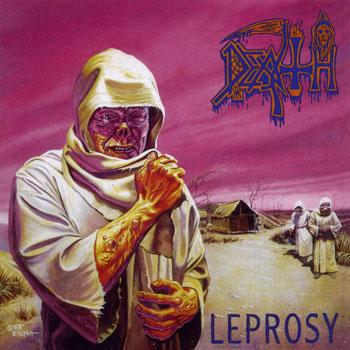