Describing themselves as a Birmingham-based punk/blues trio, Dead Sea Skulls certainly have three members, and by all accounts reside within a reasonable distance of the second city. The ‘punk/blues’ tag needs a little exposition, though. Anyone coming to ‘Fortune Favours The Brave’ expecting ‘Muddy Waters-meets-Joe Strummer’ is likely to come away disappointed.

The five songs herein mostly have their roots more in modern alternative rock/pop, calling to mind The Automatic and Queens Of The Stone Age far more readily than RL Burnside or Stiff Little Fingers. There isn’t really even a nod to anything blues-based until closing tune ‘Riding High’ and its fuzzy slide guitar, and even then it’s more Virginmarys than Virginia blues.

The EP really shouldn’t be dismissed through genre mis-selling, mind. For a three-piece, Dead Sea Skulls produce an impressively layered racket with all three members singing and middle track ‘Givin’ All I’ve Got’ having some nice subtle electronic flourishes. They also have a very good line in leaving space where it’s needed to make eventual hooks even bigger, rather than trying to fill up every musical gap with something (see: fourth track ‘Come Around Again’).

As a whole ‘Fortune Favours The Brave’ slots firmly into the ever-expanding ‘initially-slightly-forgettable-but-hopefully-a-grower’ section of this reviewer’s record collection, but there’s certainly promise and passion within which will bear further observation of Dead Sea Skulls as they progress; Midlands Rocks certainly won’t mind catching them live. 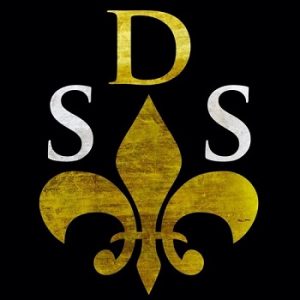