Even as walls between genres topple playing crossover can be a risky business. Fumble the ball and a band can find themselves in a musical no man’s land with no appreciative audience to play to. No such worries for London’s Dead Man’s Chest who effortlessly fuse the metallic punch of Machine Head’s Burn My Eyes with the hardcore rage of Hatebreed’s Perseverance and subsequently their latest EP, Dear God, is something of a brutal beatdown.

Formed in the capital way back in 2006 it seems an aeon since their last release (2016’s Violent Days) and even more so in the world of hardcore where trends come and go with rapidity. The eponymous opening track proves Dear God was certainly worth the wait and begins with a brief blasphemous intro before Dead Man’s Chest arrive with all guns blazing. The riffs fire in tandem and roll from speaker to speaker like a division of Panzer tanks as the drums land like heavy artillery. Martins vocals range between the clean and guttural as all the constituent parts coalesce into a vicious ferociousness. It’s a remorseless and relentless musical pummelling yet throughout there’s an inherent groove and swing that’s sure to ignite mosh pits wherever it’s played. Despite being a full on sonic assault there’s plenty of invention on offer: the breakdown mid song is a thing of beauty while the swirling guitars that follow seem to spiral upwards. 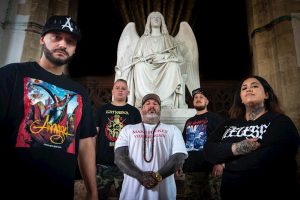 Touring and recording with such legends as Terror, Sick Of It All and the Cro-Mags  has rubbed off on Dead Man’s Chest and Dear God places them in the same bracket as such luminaries. ‘United States of Me’ begins as ‘Dear God’ ended as barked vocals are encased within a twin guitar attack. A distinct lack of elongated guitar solos renders the track hardcore yet there’s a metallic punch is evident when the band thrash along like Slayer and, like a scientist fusing chemicals, Dead Man’s Chest know just how far to push the envelope. To label them crossover or metalcore doesn’t really do them justice as they’re a pleasing amalgamation of different extreme styles incorporating death, speed, grind and power-violence. The production here is a real boon with the songs given a warlike feel much like Bolt Thrower and Toxic Holocaust at their most brutal.

While most bands tend to mellow with age Dead Man’s Chest have taken the opposite route and, in a similar fashion to Pantera in the ‘90s, are getting heavier and heavier. With this five piece scrawling their sound on every available surface this EP is akin to a vicious beatdown. Don’t say you weren’t warned! 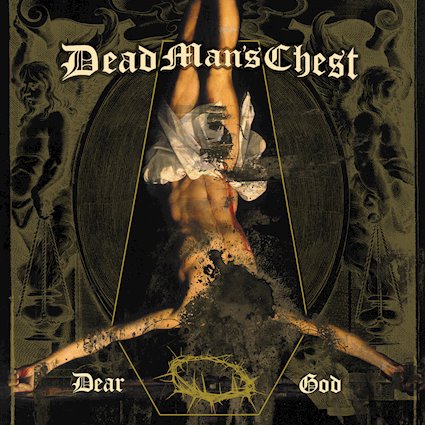