Fans of high-energy rhythm and blues are in for a real treat with the coming of the David Sinclair Four’s new album, Apropos Blues. Taking its title from a conversation David had with ZZ Top’s Billy F Gibbons, this album is bubbling and fizzing like a bottle of champers and plays like a greatest hits package. So, it’s time to strap yourself in, as the real Fab Four (plus a few special guests) take you on a crazy 45-minute ride.

Just when you think you’ve heard all that a genre has to offer, a band comes along to shake things up, and the David Sinclair Four have certainly got things fizzing. Capturing the excitement of the British blues boom (just before it morphed into metal) Apropos Blues gets off to the best possible start with lead track ‘Hip-Hopping’ and, heavy on the harmonica, it saunters into town with a cool shuffle. At this early stage you’d be forgiven for thinking that the David Sinclair band are just another combo putting a lively take on the blues, but then comes Scottish rapper Johnny Cypher to throw things in a hex. The idea of laying rap over a 12-bar boogie might seem like the musings of a raving madman, but it fits like hand in glove. I’d never heard a Scottish rapper before, so this track was something of a revelation, and Johnny’s brogue delivered with a lovely lilt, adds a new dimension to the song.

David Sinclair also has a career as a journalist, and he brings a lyrical astuteness to Apropos Blues, and it is a wordy acumen that’ll constantly have you pricking up your ears. There’s a quintessentially English bent to his prose; it’s an offbeat examination of the minutiae of modern life, it’s slightly cynical but tinged with a wry humour. It is observations of quirky irregularities that often hide in plain sight, but it takes a keen eye, and a sharp pen, of a David Sinclair to make them breathable and three-dimensional. Check out these words of wisdom from ‘Borrowed Rhyme’: “It’s a cherry pie, You better spit out the stones, Like Brian Jones”. It demystifies the whole Rolling Stones/Brian Jones mythology in sixteen succinct syllables, and I rather like it.

Alluding to the album’s title, Apropos Blues does owe a little something to early ZZ Top. It packs the same verve and vitality as, say, Fandango!, and while the David Sinclair band do wear their influences on their collective sleeve (check out the Knopfler-esque tone on ‘Years Are Gone’ and the high-octane run through of Berry’s ‘Bye Bye Johnny’) overall this quartet are rocking a unique groove. That’s primarily due to the metronomic rhythm section (brothers Jos and Rory Mendoza) who provide a solid backbeat over which David’s and Geoff Peel’s guitars tussle. In a genre that often harks back to some mythical golden age, David Sinclair and band are a rarefied beast who set their sights firmly on the future.

The array of top artists who have been drawn into David Sinclair’s orbit is vast and deep (and too convoluted to detail here) but with this album, it’s easy to hear why. With new album Apropos Blues about to hit the streets, it seems the sky’s the limit for this quirky quartet. 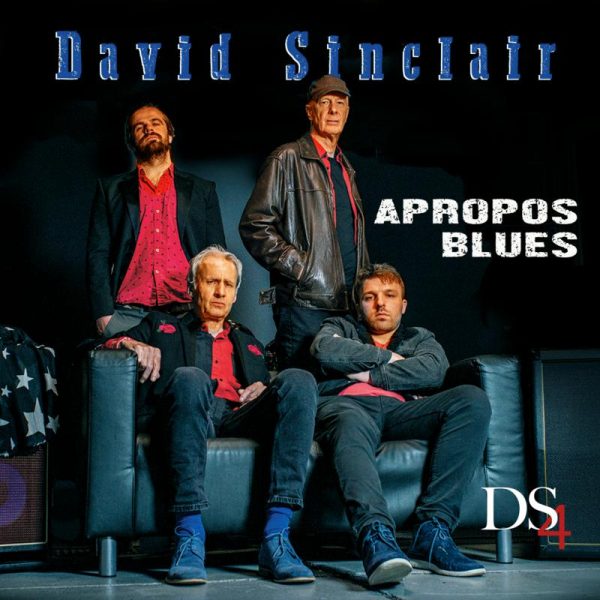