The lights go out on Paul Castles while listening to Darkher’s debut release Realms, released via Prophecy Productions on 19 August 2016

Realms is one of the most ethereal and enchanting albums your ears are likely to tune into this year. A soundtrack of doom, despair and despondency but artistically crafted in a featherlite form that once sampled you can’t help but be drawn back into its magical powers. Darkher is essentially the work of Yorkshire chanteuse Jayn H. Wissenberg, whose dusty dulcet tones could scarcely illuminate this sparkling album more brightly than had it been set alight by a raging bonfire. The pace throughout is sedate, although not to the point of stationary.

The contours are delicious and riding them is like hitching a lift on a giant fluffy cumulous nimbus looking down on everything from a great height. But while the grooves would gladden even the coldest of hearts Realms remains an overwhelmingly depressive album, twisted and very occasionally contorted by its own inner demons. The despair within is little short of tangible, and when Jayn releases one of her emotive wails you almost have to adopt a stiff upper lip to prevent yourself from crumbling into a distressed wreck.

Opening instrumental ‘Spirit Walker’ creates an eerie mood with its metronomic drone but it’s only with ‘Hollow Veil’ does this record really start to leave an impression. A crawling rhythm eventually allows Jayn’s softly textured tones to the fore and as this somber reflective piece goes deeper it eventually opens up into a cacophonous chamber in which the full remarkable range of Jayn’s vocals emerge sending shivers down the spine and then all the way straight back up to the nape of your neck. The mood is every bit as piercing with ‘Moths’ which gently meanders through the air a bit like, well yes a moth! The song climaxes in a crescendo of whooahs that fill the atmosphere with gothic splendour.

The start of ‘Wars’ is a droning echo that reaches out seemingly into some unseen pasture before a pulsing rhythmic beat enters to help shape the journey, the tempo quickening like a heartbeat scaling a hill before Jayn’s vocals add a human touch. Swept along fervently by a military style roll, ‘Wars’ eventually disarms into a misshapen melancholic state over which some haunting whispy cries circulate in the distance. As a tumultuous climax ensues on this poetic pageant of pain, cymbals start their own blood and thunder battles.

To say calm is restored with ‘The Dawn Brings A Saviour’ scarcely does the fragility of the next song justice. Gossamer thin, its almost frightening fragility is laid bare to the extent that the listener almost feels like an intrusive voyeur poking their nose into private grief. At times Jayn’s ability to manage her vocal range even at its most vulnerable moments is little short of breathtaking. And yet, as with everything Darkher, do the pull is magnetic and you’re almost left open-mouthed staring unblinking into a vacuous void.

The song ‘Buried’ is split into Parts I and II, the first of which is so dormant and docile that at first you almost wonder if there’s anything there at all. Eventually a siren drones listlessly, over which Jayn injects a few more pained and precise words. Part II is infinitely more oppressive, you almost feel  the hand of death is guiding you through a lyrical landscape through which mortality is all too transparent and the final steps into the barren abyss seem uncomfortably close for comfort.

The longest song here is ‘Foregone’ which rumbles menacingly and hypnotically straight from the off, almost having to reign itself in as Jayn’s haunting vocals threaten to open up into a great expanse. Jayn H. Wissenberg has the same vocal poise and presence as Kate Bush, Elizabeth Frazer, and in places Siouxsie Sioux and the black laced closer ‘Lament’ is another majestic musical arrangement in which vocals and acoustics embrace warmly.

Darkher have built on the positive response to 2014’s debut EP The Kingdom Field.  Assuming that that one passed under your radar, don’t make the same mistake with Realms, an album of incomparable magnificence infused within which ashes are thrown gently into the breeze as effortlessly as a child sprinkling fairydust onto a cupcake. 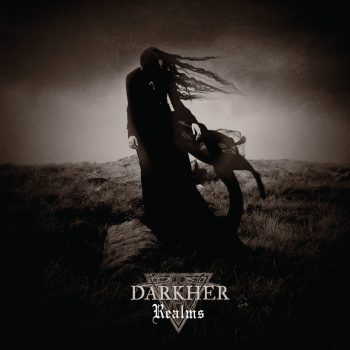