A steppe in the right direction

Paul ‘which is the bus for Kyrgyzstan’ Castles hops on board Darkestrah’s stunning new album Turan, out today on French label Osmose Productions

If you had hoped to engage in an excursion this year to some far flung land of mystery but empty pockets had as usual scuppered such exotic dreams, help is at hand. Not only is Darkestrah’s latest full length-release Turan a fulfilling experience it also doubles up as a mini geography lesson with the steppes of Central Asia and frozen rivers of the Ural at its central core.

When occasionally rifling through some albums, it’s seldom that I stumble upon one in my collection from Kyrgyzstan. Darkestrah though are happy to oblige and plug the gap.

A little background into these corpsepaint wearing hordes. Well, having been formed by Asbath in 1999 their first two demos were titled ‘Pagan Black Act’ and ‘Through the Ashes of the Shamanic Flames’ which tells you roughly what side of the musical ballpark they’re standing in.

And so to Turan, their sixth album which again delves deep into Darkestrah’s mythological and ritualistic traditions in a stunning sonic soundscape within which you’ll find nestling elements of oriental folk melodies, some frostbitten black metal swirls and a hint of gloom to finish.

We won’t let the fact that the band are more or less German-based thesedays spoil a good story. The spiritual energy within Turan has its roots in their obscure homeland and that is where the inspiration for the songs derives. And although Darkestrah as a unit have been around a while this release does feel like a new beginning thanks to their new singer Merkith. It’s also their first offering via French label Osmose.

The first track ‘One with the Grey Spirit’ opens mysteriously with a few muffled spoken words, which although not understood, still manage to create a suitably eerie opening few moments before the music takes over. And take over it most emphatically does. 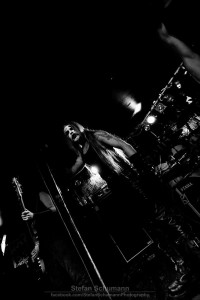 As the sweeping melody subsides Merkith’s vocals viciously kick in, spitting and snarling. The drums are in full on attack mode but within all of this some wonderfully uplifting rhythm patterns are allowed to infiltrate their way into the mayhem.

Second song ‘Erlik-Khan’ is evenly paced, Merkith’s chilling cries resting above the riffs being chiselled into the ice by Scythe and Cerritus. Darkestrah bring a further electronic edge to their material thanks to synth commander, Resurgemus.

All six songs are around eight or nine minutes long, and they are certainly blessed with power and potency. Put together with admirable dedication, the reward is an album with songs such as ‘Conversations of the Seer’ that take you on more adventures than Marco Polo.

The near 10-minute flight of ‘Bird of Prey’ has a throbbing riff that builds the atmosphere and tension throughout, Merkith stretching his larynx to the heavens as a kaleidoscopic sonic storm engulfs what is certainly the most mournful song on Turan. You can almost hear the tears hit the ground as the aching melody swirls despairingly into ultimate oblivion.

A wintry breeze leads us into the final track ‘The Hidden Light’ and you almost feel the need to reach out for an extra layer of clothing as the biting riffs start to stab away. As Merkith’s traditional blackened cries take over, the symphony builds with fleeting female harmonies adding an additional dimension to an already multi-layered concerto.

An album as empowering as this one, begs the final question… How many more bands as good as Darkestrah are currently under wraps in Kyrgyzstan?