Imposing its blackened will…

The ever cheery Glenn Danzig fires up the vintage amps and bestows his ‘Black Laden Crown’ upon us, his first album of original material in 7 years. A quick glance at the song titles (see below) lets us know that he’s not about to fulfill any secret, long held dreams of branching out into smooth jazz. So, with that in mind, let’s don our black smocks and see what we do have.

The title track sets the scene. It’s almost soundtrack music – creating a mood…a dark mood, obvs. The guitars (courtesy of long-term musical foil, Tommy Victor) are black, blue(sy), funereal – preparing us for Glenns entrance which, as ever, is that brooding mix of Elvis and Jim Morrison, although a touch huskier these days. But fear not, it works. And on it marches…moodily. Until, completely out of the blue, it kicks up a gear into a chugging riffstorm.

And we’re off and running into the proper songs. ‘Eyes Ripping Fire’ imposes its will. It’s almost hardcore aggression calling Prong to mind (well, it would really). Its booming dronery also recalls ‘Seasons In The Abyss’ era Slayer, and not for the only time. We also have muscular, squalling biker rock – ‘Born To Be Wild’ for black-clad millennials. It’s adrenalised stuff. You know that feeling when you’re driving slightly too fast and don’t quite feel in control? That. That’s what it does to you.

And there’s lots of what Danzig does best. Got a favourite Danzig song? Well, 6 or 7 of these tracks will sound like that. Dark, sinister, foreboding bluesy riffs…riffs that drive pick-up trucks and eat their own roadkill. Oh, and lots of idolatry of all things blacker than pitch. Gear changes too, lots of those and junkyard dawg guitars and long solos – this album belongs as much to Tommy Victor as it does Glenn Danzig.

There are some great road songs. Making a horror film set in the Badlands? Is your opening shot one of an endless desert highway, sun flaring behind a vulture, a menacing ramshackle barn and a dead deer? Then you need the sun scorched ‘Last Ride’ on your soundtrack.

And on it goes, faithfully following the blueprint. As enjoyable as the songs are they begin to get a tad samey until we get to the final (and, sadly, weakest) track, ‘Pull The Sun’. More powerchords, more gravelly crooning. Imagine the songs of ‘Love’ era Cult with the guitars of ‘Electric’, and again Tommy takes us to the finish line.

It’s Danzig. No more, no less. Admittedly it’s up there with his best but he’ll pick up no new converts. Great performances, production and vibe at the service of somewhat predictable songs. Cautiously recommended. 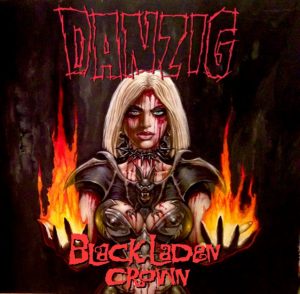