With his exceptional ‘Myths, Legends and Lies’ album beginning to make waves beyond the melodic rock community, Danny Vaughn has embarked on a tour of the UK, which included a stop in Nuneaton. At the moment, it’s probably just a pipe-dream for Danny to reproduce the superbly constructed arrangements and orchestration of the album live, so at present he has to rely just on his voice and guitar.

Before Danny, we had a short set from local singer songwriter KYLE BOSWELL Unusually for such a set, he was playing an immaculate cherry red Gretsch semi acoustic, which, along with his bright and lively songs, gave his songs an very 1960s sound, It would be interesting to hear they sound with more backing, although he wasn’t helped by the now sadly customary group of debaters near the bar attempting to drown out the music with their opinions. Despite their efforts, we heard enough to note that Kyle has a strong and interesting voice, and although he could perhaps put a little more variety in his songs, h along with his bright and lively songs e has a talent worth looking out for.

There are two things that strike you about the set Danny Vaughn is playing on this tour, firstly that he often plays past the two hour mark, playing over twenty songs each night and embellishing them with the background to the songs and stories from his career. The second is that each night’s set often differs significantly from the others, as he often only decides what he wants to play on the day, and equally often takes requests vis social media or occasionally from a chat before the show. Having been to so many gigs where the setlist may have been put together long before, and everything is choreographed down to each lighting effect, even the synchronised headbanging, seeing a show with this kind of spontaneity and rapport with the crowd adds an extra layer of enjoyment for everyone there. 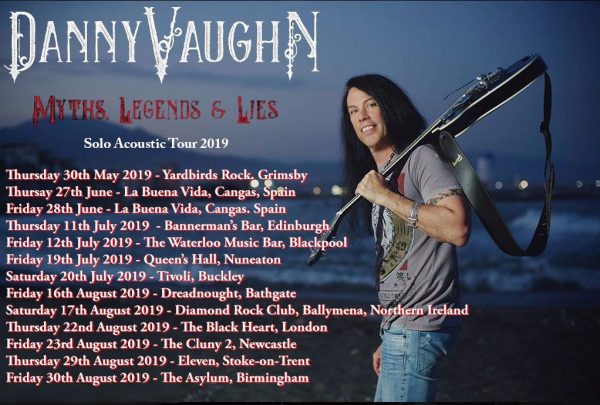 Obviously, the centrepiece of the show is the material from the new album, and for all that the album has only been available for around a month, a lot of the songs have that uncanny quality of making you feel as if you’ve been familiar with them for a long while. This is especially true of ‘The Shadow of King John’, which is already a crowd favourite and has them joining in on the chorus, although part of you wishes that Liz Prendergast’s violin from the recorded version could be part of the live show, and also the epic ‘Seven Bells’, which loses none of its emotional punch in this acoustic format. A mention, too, for ‘Point The Way’, with its spoken verse and sumptuous chorus, and the almost gothic menace of ‘Black Crow.’

He also dipped into his previous solo work, including some really deep cuts, such as his part in the Frontiers Records ‘From The Inside’ project, giving us the gentle ‘Beautiful Goodbye’, then harking back to his time in Waysted with Pete Way for ‘Black and Blue, and from his ‘Traveller’ album, including the set opener ‘The Warrior’s Way’ and the title track of the ‘Soldiers and Sailors’ album was a very welcome addition to the set. He even took one or two requests from the floor, including the entertainingly cynical ‘Is That All There Is’, and of course there were Tyketto songs. ‘Walk on Fire’ induced the first singalong of the night, and after ‘Nothing But Love’ the crowd responded by singing ‘Happy Birthday’ back to him, his birthday having been the day before the gig. But even then, he didn’t always play the obvious tracks, adding ‘Circle The Wagons’ and ‘Here’s Hoping It Hurts’ from the band’s most recent albums. He seemed to be ending the proceedings with Tyketto’s ‘Wings’, but the strength of the crowd’s reaction was enough that he couldn’t resist adding ‘The Last Sunset’ to the conclusion of the set.

Danny Vaughn is often described as one of rock’s best, yet most underrated singers, and he gave us plenty of evidence to back that up in this show. His voice seems to have added extra depth and resonance as time has passed, giving both the old and new material even more emotional impact, and it has to be added that his guitar playing, which often gets overlooked, is always well worth hearing. His new songs are a significant departure from the musical genre he’s usually included with, but they seemed to have been warmly embraced by his fans, and it all adds up to a terrifically enjoyable and rewarding gig. The tour will come to Eleven in Stoke on Trent on August 29th and the Asylum in Birmingham on August 30th and cannot be recommended too highly.