Realeased in April by Jazzhaus and reviewed by Gary Cordwell

This sumptuous new release from Brit blues stalwart Danny Bryant is a rare treat for us blooze buffs! DB has fulfilled a long held ambition and gone down the (occasional) Bonamassa route of recording and playing with a big band. This augmented 9-piece band roars through 2 discs worth of Bryant hits and blues covers, recorded for posterity in Germany and Holland and released as (the somewhat harshly titled) ‘Big’.

Opening track, ‘Temperature Rising’ reassures us that this experiment is going to work. The sound is, indeed, big – there’s a bit of a wall of sound thing going on. The added instruments (rhythm guitar, keys, horn section) add colour, never taking over. Danny doesn’t subdue his guitar attack either, that trademark beefy roar is present and correct. The horns briefly take centre stage and the guitar solo, when it arrives, is fiery. These songs work very well indeed in this new setting.

The eleven minutes plus of ‘Just Won’t Burn’ give the band a chance to stretch out and flex their muscles. The horns take Bryant’s riffs ever higher while the gentle, almost jazz like piano solo adds texture. Now that band and crowd have warmed up and relaxed we’re off and running, and we’re treated to a veritable smorgasbord of styles and emotions. We have more big, horn laden riffage, lean, mean, Howlin Wolf style growlers (with added Hendrixy licks) and 12-bar chugs which are ideal for barroom piano, groovy Hammond organ and wailing horns.

‘Groaning The Blues’ is a ballsy choice of cover. Clapton essayed this pretty damn superlatively on his ‘From The Cradle’ album, but this version, taken at a slightly slower clip, is just fine. And so we continue – ‘On The Rocks’, which opens side 2, is an instrumental jazz blues shuffle with Hammond a go-go and echoes of Georgie Fame. There are more long, slow blues where Danny can emote (with voice and guitar) – his aptitude for these is clear. ‘Painkiller’ starts with gentle acoustic guitar and mournful horns and ends with an extended electric solo and a big powerchord finale.

The evening concludes with an impromptu stomp through ‘Stop Breaking Down’. Solos abound – Hammond, horns and a final shred from Danny. And there we have it, a triumphant release from DB which he can feel justifiably proud of. An album of solid, workmanlike blues given added power and dimension by a talented big band and a natural and instinctive bluesman. Let’s hope this becomes a regular thing. 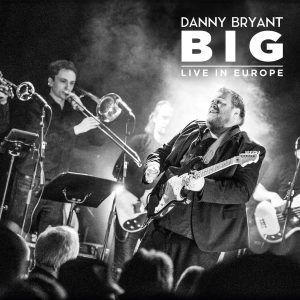