A very strong claim for their place in the rock hierarchy…

Can a band still be ‘underground’ when they’ve toured with Guns ‘n’ Roses, featured Elijah Wood in their videos and played on a cruise-liner with Motorhead? Eighteen years into their career Danko Jones are still fiercely proud of their independence and unwillingness to bend their firebrand sound to suit what’s ‘popular’, but in terms of audience and sales they’ve come a long way from the basement sleaze-rock crew they started out as. Fire Music is the latest installment of their story.

There’s possibly not been a more descriptive ‘autre’ LP title since Pantera’s Vulgar Display of Power or Reel Big Fish’s Candy Coated Fury. DJ’s twelfth (count ’em!) album brims over with vitriol from the very off, the Toronto trio setting up a deceptively simple instrumental bed for the frontman’s impressive vocal, crooned, howled and snarled by turns. The Twisting Knife, Gonna Be A Fight Tonight, Body Bags – the song titles speak for themselves, the latter’s ‘I do not forget, I do not forgive’ refrain summing up the subject matter of much of the first half.

Around halfway through the foot is taken off the gas slightly, the Misfits-esque power-punk moved aside for the wonderfully syncopated and cowbell-infused Do You Wanna Rock? and the slinkily tongue-in-cheek Getting Into Drugs, before slowing things down almost to balladry levels for I Will Break Your Heart – it’s a ‘journey’ album for sure, and one with barely a low point to it.

By the time the fast-paced-but-emotionally-raw She Ain’t Coming Home rolls around to round out Fire Music’s bare 37 minute run-time, any listener with a penchant for punchy punk-infused rock ‘n’ roll should by rights be slightly breathless and reaching for the ‘play’ button again. With The Misfits in-fighting over their own legacy, The Backyard Babies seemingly still on hiatus and The Stooges limping towards their inevitable demise, Danko Jones have just put in a very strong claim for their place in the rock hierarchy; check it out. 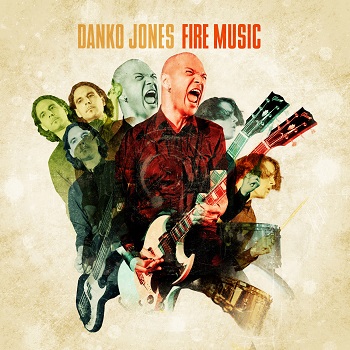