There are only a few routes a hard-rocking, road-hardened pedigree outfit like Toronto’s Danko Jones have open to them in the uncharted swamps that the music industry and the world in general have become. Some splinter and do ‘worthy’ solo work to a diminished audience; some get righteously angry at the system and throw out an overtly political polemic (see: Therapy?’s excellent ‘Cleave’ reviewed here).

And some make A Rock Supreme, sticking two fingers up at the horrible world ‘out there’ and carrying on doing what they’ve become known for over the past two decades. “You’ll get no surprises from us,” says the eponymous main-man, “it’s just more straight-up no-bullshit hard rock songs”.

He speaketh sooth. From opener ‘I’m In A Band’ (the title says it all), through highlights like ‘Fists Up High’ (apparently a personal favourite of the band, with good reason) to breakneck closer ‘You Can’t Keep Us Down’ with requisite gang-chanting this record is a lean, mean, rock ’n’ roll machine.

Produced by Canadian studio wizard Garth Richardson, who’s been behind the desk for Rage Against The Machine, Biffy Clyro, and The Red Hot Chilli Peppers, among others, the sound is refreshingly fat-free too. The three-piece aren’t afraid to lay the songs ‘gig-bare’ where other bands might have been tempted to add layers of guitars to prop up solos (‘You Got Today’ is beautifully ZZ-Top-esque), but it never feels too sparse.

The uncompromisingly up-tempo R’n’R from start to finish is exhilarating and slightly tiring at the same time – but in the same way that a long bike ride with a hangover might be. Sure, they COULD have thrown in a break in the middle – a low-tempo ballad for you to catch your breath – but then you wouldn’t feel so pumped-up and ready to face the world. 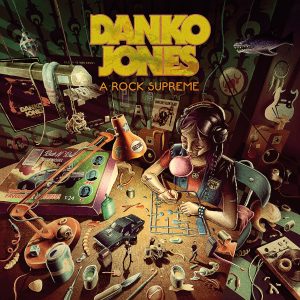