Since meeting up at Download in 2013, the respective lead vocalists in the Dan Reed Network and Tyketto have not only forged a firm friendship, but also become one of the most entertaining live acts around. The mixture of two terrific singers, two quality back catalogues and carefully chosen covers, not mention a store of great stories and anecdotes from their lives and careers, adds up to a hugely enjoyable evening, with the added attraction of never knowing quite what’s coming next, which was definitely true of this evening in The Robin. This date was part of the third Snake Oil tour, a project that has been so successful that this tour will include mainland Europe for the first time. Snake Oil and Harmony, incidentally, is a self deprecating reference to the snake oil salesmen of the American West, travellers who would attempt to sell various potions and medicines claimed to cure all ills, but in reality were a concoction of various things that had no medical properties whatsoever, except probably to make even sicker than you were to begin with.

Unusually, The Robin was in full seated mode for the show, and, pleasingly, there wasn’t an empty seat to be seen when Reed and Vaughn took the stage, gave themselves a mock introduction on a darkened stage, before making a proper entrance. Each of the shows on this tour has begun with ‘Smile’, a Dan Reed song, then each singer has taken turns to choose a song, but they do seem to have a different approach. Reed is more likely to choose a song from his solo catalogue, with Network songs comparatively rare, whereas Vaughn leans a little more heavily on the Tyketto catalogue, but also balances the new with the older songs, not mention his time with Waysted. They also make a point of not playing the same set each night, being likely to change anything up to 50% of the set list from night to night, and Reed in particular is not averse to take requests from the crowd. Best of all is the news that the duo have started writing together, and the first fruit of the partnership was played tonight, a reflective song on time passing called ‘Where the Water Goes’. It sounds good on first hearing and is definitely a grower. 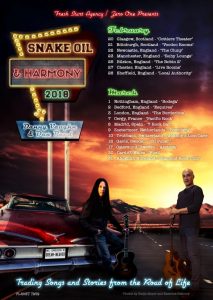 The covers are fascinating and often surprising. Vaughn sings ‘Take Me Home Country Roads’ for a fan who lost his father recently, while Reed reveals that the first song he ever learned to play and sing was ‘Can’t Help Falling In Love With You’, putting his own stamp on a song that everyone knows. For Springsteen’s ‘Independence Day’, they introduce Lucy McDonald, from Scotland on viola, who adds a superbly mournful atmosphere to the song, that I think even Bruce would approve of, then Danny Vaughn harks back to his role in the touring ‘Symphonic Rhapsody of Queen’ show, and delivers a tremendous version of Queen’s ‘Love of My Life’, which had the crowd joining in, before the duo are joined by Vega’s Nick Workman, for Tom Petty’s ‘Freefalling’.

One other thing that’s fascinating about the Snake Oil shows is how, as the tour goes on, the two musicians begin to add their own parts to each other’s songs, whether with another guitar part, or by singing harmonies, so something is always being added from show to show. It helps to make each show individual and fresh, as does the fund of stories each one has about their lives and careers, which vary from teaching a Tibetan monk to sing ‘We Will Rock You’, to being brought into Waysted at short notice and singing at a festival two days later. They played for over two hours at the Robin, without a support, and I think it’s fair to say that nobody went home without being surprised, moved, pleased or richly entertained. If you get the chance, try to see one of these shows, you won’t regret it.