There have been attempts for us to latch onto this New wave of Traditional Heavy Metal Band tag, and while a number of those acts thus categorised (or pushed into the stable kicking against it?), may tick the boxes of sounding like some band or other you liked in yesteryear, few of them have delivered a bona fide riff you can classify as classic and yet new.

Thus, comes along ‘Soul Parasite’, not necessarily new, and more blues rock-sourced than straight classic rock, bur decidedly bendy and reaching beyond the too obvious while still following Dan Patlansky’s penchant for the Lenny Kravitz meets a tighter Richie Kotzen end of funk rock. If that analogy comes across as begrudging in a glass half-full manner it’s not intended. The song’s main riff is staggered within the framework of the song, making you want to strut and play cool air guitar while you sing along to the chorus.

“Some people are just born bad and can’t be changed,” remarked the guitarist recently. “I grew up and got to know some people that seemed to just possess a bad streak in them, and no matter how hard people tried to steer them in a diﬀerent direction, they would just end up being a bad ass in everything thing they did.”

Well, we’ve all known a few different coloured varieties of those folk in our times, and throughout the course of his latest album. Shelter Of Bones, Patlansky shares a few memories of his own in that regard, and unsurprisingly while they make take a different shape and form, they all leave a bad taste in the mouth.

‘Snake Oil City’ swings in loud and proud with an uptown blues swagger, and some fine lines in self-depreciation like “Looking for redemption but I went too far” is this tale of a royal scam – There’s a lengthy guitar soloing passage that goes through at least three stages, each differing in tempo and style, all raising a smile.

‘Selfish Lover’ digs a deep hole with his voice a distant echo before scrambling back fast and beating you over the head in a manner mimicking The Beatles’ ‘Helter-Skelter’ wherein Hendrix just stepped into e recording booth. By comparison, both musically and lyrically, ‘Lost’ takes thing down a peg or two, for a Hammond warmed ballad with thick confident voice and lighter stroked guitar notation.

Released as a single, ‘Bad Soul’, applies Patlansky’s penchant heavy funky guitar licks albeit in slightly slower form here, with the slightest of downer rock approaches and yet something of a Beatles harmonic quality about it again during a spirited chorus that’s contrary to its lyrical intent.

‘Presence’ Where Physical Graffiti-era Zep, Stevie Wonder and Supergrass hang out together working on a pop tune for Take That, and somehow it almost works. ‘I’ll Keep Trying’ is another, that in a different world could have its eyes on the charts – A modern ballad, Spartan rhythms and drip-fed keyboards dangle one side soulful electronica while lyrics repeat in that nursery style manner kids today get off on, while guitar latterly solos in a sweet jazz-blues melancholy.

‘Devil’s Dopamine’ serves up some Red Hot Chilli Peppers gritty funk rock, busy on the popping bass, and a short but nicely intense cranking guitar solo. One more an up-tempo tune is followed by a slow one in ‘Sweet Memories’, evoking that early doo wop innocence in melody while thematically being a littler more mature. Another track released as a single, ‘Hounds Loose’ features some bitter lyrics delivered venomously, rather fittingly the music is similarly like a heavy guitared Steely Dan.

Closing with title track ‘Shelter Of Bones’ we find ourselves once more in a moody ambient electronica setting, Patlansky’s manly but gentle voice invoking better times ahead, and a brief but intense solo leading the way.

Recorded over a three-year period during the coronavirus pandemic, the gestation period has proved valuable. Dan Patlansky has rarely had trouble delivering hard-hitting funk rock blues tunes, and wailing away in a Hendrix styled manner, but with Shelter Of Bones he’s recommitted to writing songs with more depth and structure, while also expanding his overall musical vocabulary to take on more contemporary sounds. 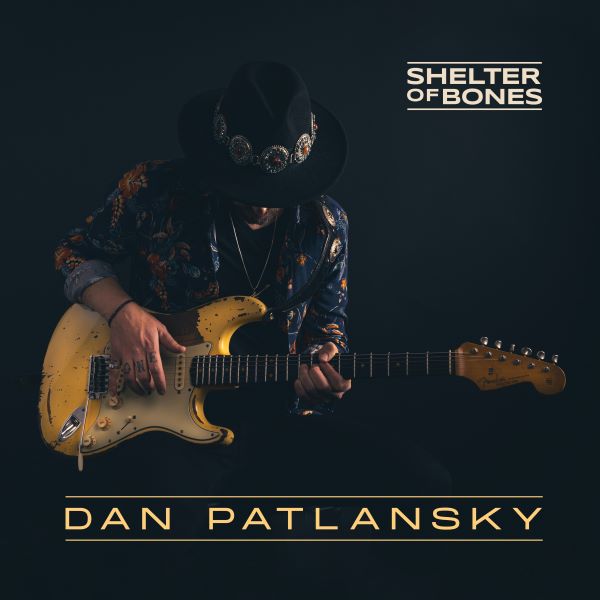