So after a two-year wait the Damnation hordes are this week preparing their annual pilgrimage to Yorkshire, writes Paul Castles. This though will be the final time as from 2022 the whole sonic shebang switches to Manchester, making Saturday’s event something of a farewell festival for Damnation in its current format. 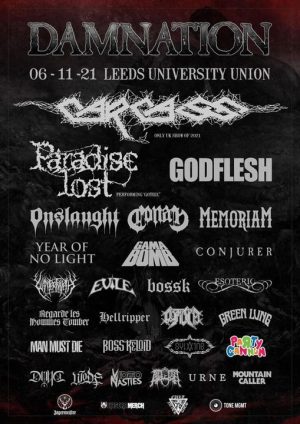 With Covid-19 still playing merry hell with those seeking to visit from overseas, this year’s festival is largely – although not exclusively – an all-British affair, much like Bloodstock was in August. For this reason perhaps more bands than usual will be completing an enviable  Bloodstock/Damnation double-header this year.

Saturday’s showcase of metal is a sell-out. If you don’t want to miss the inaugural Manchester event in 12 months’ time then see the link at the end of this preview. Regular Leeds patrons will know the format, with bands spread across the four indoor stages within the hallowed academia halls of Leeds University from noon to midnight. There is something for everyone but here are just a couple of choices from each stage.

Birmingham underground noise machine Godflesh don’t come to the surface very often. So when they do the experience is not one to be missed if at all possible. While at times sounding reminiscent of their roadworks-plagued home city, Godflesh are an immersive experience live. You may be able to look away but you won’t be able to avoid their cacophonous thunder that promises to rain industrial precipitation down on those gathered in front of the largest of the four stages at the Leeds Student Union.

Performing their seminal album Gothic in full, 30 years on from its release, will be an undoubted highlight courtesy of the always superb Paradise Lost, who will be among friends in their own White Rose county. The goth metal pioneers have so far had little opportunity to give latest album Obsidian much live airtime, so expect a taster from that too – before they really go to town on that release on their UK tour with Moonspell in February.

First up on the Tone Mgt Stage are Cryptic Shift who released their debut album a few weeks ago and are already winning plenty of admirers with their astrophysics-themed twisted tech death metal. If you think all death metal sounds the same, then these boys will prove you wrong. And as they live in Leeds you can guarantee they’ll be there in good time for their lunchtime slot!

There’s a nice top n tail to the Tone Mgt Stage as closers Memoriam are absolute maestros, with the essence of the genre impacted into their Brummie pores. While their songs may all loosely be steeped in the military, rarely do they fire any blanks as all those who were inflicted to their full-bloodied sonic shellfire set at Bloodstock will testify.

Appropriately enough, the Cult Never Dies Stage is deep in the bowels of Leeds’ Students Union. Many have taken a wrong turn navigating the labyrinth of corridors only to realise too late and have ended up missing a gem on Damnation’s most diminutive stage. This is not a mistake you’d want to make with black metal activists Abduction, another to answer a late call to appear at Bloodstock in August. They’ve had a bit more notice this time so expect the full candles, cloaks and creepiness in the subterranean lair.

One of the most impactful albums of the year so far has been Serpent & Spirit by Urne. The post black metal London trio tease and torment with grooves deep enough to get lost in. With a reputation that is growing rapidly, they’re already being booked for festivals in 2022. Make the trip downstairs for a bargain basement of a set.

As mentioned right at the start, this is a predominantly British Damnation this year. But even Bake Off have sneaked in a German and an Italian so its great to be able to welcome a couple of highly regarded overseas’ visitors. Norwegian performer Sylvaine combines ethereal haunting numbers with occasional injections of Scandi vitriol making for a compelling sonic sandwich.

Then it’s worth hanging around after her departure for a little while to catch French musketeers Regarde Les Hommes Tomber on the same stage who will deliver as intense an injection of sound as your likely to experience anywhere across the Leeds Student Union all day. Formidable! 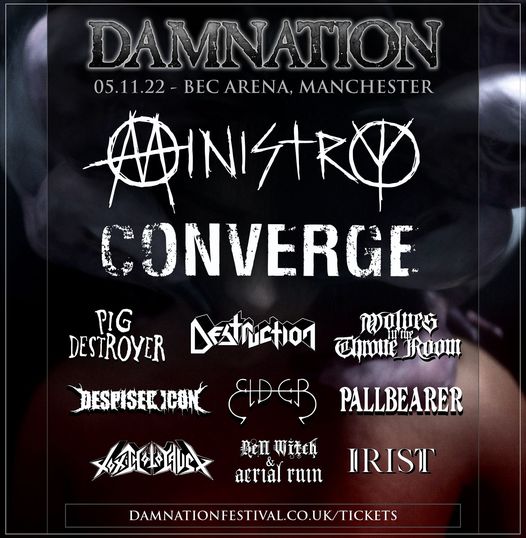