While the first weekend in November traditionally hosts parties and celebrations to mark Guy Fawkes’ floored attempt to blow up the Houses of Parliament, for those in the know the real fireworks are to be found at Damnation Festival in Leeds. Hosted across four stages at Leeds University’s Student Union, Damnation is an event not to be missed and this year’s line-up of almost 30 bands is once again top drawer. Here Paul Castles takes a look at just some of the exciting, energetic and eclectic mix that we can expect to find in Leeds on Saturday.

Watching Batushka perform is more akin to witnessing a mediaeval religious re-enactment than a run of the mill gig. Bodies and faces covered in monastic-like robes, and with more theological stage props than the Archbishop of Canterbury, what really counts with these never seen Poles is the sheer beauty and passion of their astonishing compositions. Their solitary album to date Litourgiya, released in 2015, has brought them widespread adulation among the underground of extreme metal and if the real church could bottle and share their appeal the rustic pews would be be crammed to the high heavens on a Sunday morning. But be warned, within the Gregorian chants, soft fingertip cymbals and heavenly harmonies lies a blasphemous beast that when stirred will savage like no other.
Making Batushka’s first appearance at Damnation all the more special is the fact that this will be their only UK appearance of the year.

The same sentiment also applies to Ihsahn in a solo capacity, although the bearded Norwegian icon was on stage at Bloodstock fronting the legendary Emperor. His solo work, while slightly different, is just as emphatic as his legendary black metal outfit as those familiar with his outstanding album Àmr, released earlier this year, will concur. On tracks like the melancholic ‘Sámr’, Ihsahn even dips a foot in the mainstream with wonderfully warm spiraling grooves.

Few bands come close as replicating the walk through the fiery gates of hell as Anaal Nathrakh. With a simply incredible new album under their belt in A New Kind of Horror, Birmingham’s finest exponents of incendiary headspinning music that somehow marries your best dream with your worst nightmare – usually in the same breath – are simply not to be missed. Last at Damnation in 2014, Anaal Nathrakh push the extremities of music so far that they’re beyond the reach of most people and the bludgeoning combination of Dave Hunt and Mik Kenney will not be for the faint-hearted and it’s testimony to their growing appeal that they’re elevated to the main stage this year.

The Kenney clan will be out in force in Leeds with Mik’s brother Paul on stage for the eagerly anticipated appearance of Fukpig. Paul makes music likes others make sandwiches. With the sad demise of his doom band Kroh recently, he’s already laying plans for another music ensemble. It will be interesting to see what format that takes but for now he’ll be pouring all his energies into grind fiends Fukpig. The masked warriors go for the jugular with unbridled levels of sonic savagery as anyone familiar with the appropriately titled new album Bastards will testify with songs such as ‘Lets Make Britain Hate Again’ and ‘Force Fed Fucking Bullshit’.

The Midlands are very well represented at Damnation this year, with none other than Napalm Death also making the trip up the M1. Having delivered a typically scintillating set at the Electric Ballroom in London recently during Desertfest, the politik spouting Godfathers of Grind can be relied on to spread their sonic net as wide as ever in a bid to catch those who they feel must be held to account for the world’s assorted economic and social ills. Currently hooked up with Cannibal Corpse on a tour of Latin America, if the political parlez in between songs doesn’t do it for you then you can always simply stand back and admire frontman Barney Greenway’s idiosyncratic dance steps!

At the opposite end of the speed-scale will be Celeste, who are also completing the notable Desertfest/Damnation double this year. The French gloom merchants are well worth seeing. Although you’ll probably need military night vision goggles to do so. The Gallic visitors shun traditional stage lighting in favour of headbands, worn by each of the five band members, from which a single piercing red light offers only the most subtle of illumination. Visually they present a compelling sight as the red dots bob up and down with the music which in itself is both compelling and frightening in equal measure.

It would be totally wide of the mark to give the impression that Damnation is one long screamfest; it certainly is far from that. Årabrot will bring something quite different to the party as anyone familiar with their marvelous new release Who Do You Love will be aware. Oh, and there probably won’t be a smarter dressed man in Leeds that day than Kjetil Nernes who has channeled so much of his recent health battles directly into his music.

The Norwegians are stopping off in Yorkshire during their tour alongside Pelagic Records’ labelmates The Ocean, who will also be performing at Damnation. The line-up of the Berlin-based collective has ebbed and flowed like the tide but what has remains constant is the quality of their post metal sludge sound, that makes them such an absorbing proposition.

Those seeking low slung fuzzed up doom will not want to miss Newcastle trio Bong while the immersive scintillating sounds of Danish shoegaze outfit Mol should also not go unnoticed. One of the most energetic performers this year will be the Aussie crew Ne Obliviscaris, no stranger these days to UK festivals. Not everyone has to book a wing ride to reach Yorkshire though and Hundred Year Old Man, who delivered a mesmerising set at The Hammer And The Anvil in Birmingham earlier this year, will probably be able to catch the bus to the Students’ Union from their Leeds home.

The enigmatic Ohhms continue to grow from strength to strength and if there’s one performer who could go toe to toe with Napalm’s Barney on the dancefloor then it has to be their exhilarating frontman Paul Waller. The Canterbury outfit, who are also touring soon with Boss Keloid, test the sonic and emotional barriers like few others and prepare to have your heart ripped asunder by songs from their remarkable debut album The Fool. 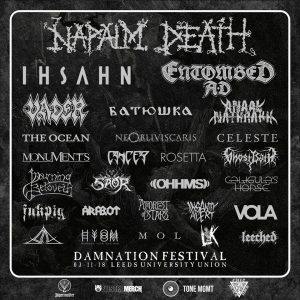 And if you’re still scratching your head wondering who to watch next then why not go hell for leather to catch Polish powerhouse Vader. Having recently conquered Russia on their ‘Battering the East Tour’ the veteran blackened death metal warriors can be guaranteed to have left something in their locker for Leeds.