The incomparable OPETH headline Damnation on Saturday, November 2 and their presence on the main stage at Leeds University Students Union speaks volumes about the regard in which this festival is held across Europe and beyond. The Swedes have a new album out, In Cauda Venenum, which continues their prog passage, while in Mikael Akerfeldt the acclaimed Swedes can also boast one of the most naturally funny frontmen on the circuit.

While interesting to see how some of the new material transmits to a live audience, you just know that Opeth will find it hard to resist dropping at least a couple of numbers from their past into the melting pot as they made clear in their pre-Festival statement. “We are very excited to play this year’s Damnation and hopefully we’ll be able to play a few new songs along with tracks from our older records. See you there!”

Festival organiser Gavin McInally added: “You could argue Opeth are too big for an event like Damnation, and you’d probably be right – they headlined Wembley Arena after all. So it’s an incredible coup, and a genuine honour, to welcome a headliner of such stature to Damnation.”

This will be Opeth’s Damnation debut, and the same thing applies to several other acts performing this year, among them French post-hardcore outfit BIRDS IN ROW, Finnish prog rockers WHEEL, who delivered a sumptuous set at Bloodstock just a couple of months ago, and American sludge quartet LORD DYING who will be showcasing songs from their new album Mysterium Tremendum.

For New York’s avant-garde black metal trio IMPERIAL TRIUMPHANT Damnation marks their first venture on UK soil. The band said: “Imperial Triumphant has the distinct pleasure of making their first trek to the United Kingdom so luxurious thanks to their new hosts Damnation. Is the UK ready to join the golden ritual?”

Acclaimed cellist JO QUAIL adds diversity – and a touch of class – to the bill with further homegrown death, doom and black metal talent in the shape of Midlanders’ ALUNAH, who will no doubt be showcasing some material from new album Violet Hour and Liverpool black metal trio DAWN RAY’D who are using Damnation as the first port of call for their forthcoming Euro tour alongside Minnesota maestros False.

Scottish tech death quartet GODEATER are about to embark on a UK tour with Harbinger, before paying their first visit to Damnation a couple of weeks later. One of the brightest prospects from north of the border, Godeater will be showcasing material from recently released debut album All Flesh is Grass.

AA Nemtheanga is no stranger to the delights of Damnation having performed at the Leeds Student Union both with PRIMORDIAL and his doom spin-off Dread Sovereign. Returning to the main stage this year with Primordial, AA said: “It’s with great pleasure we announce our taking part in Damnation. This will be an exclusive UK show and we will pull out a few curious volumes off the shelves and dust them down.”

Scorching Welsh death metal outfit VENOM PRISON are another act returning to Yorkshire: “Our 2017 tour of Animus and our performance at Damnation Festival was a definite highlight in the life of Venom Prison to date,” they said. “This year will see us return to Damnation and bring Samsara to one of the best indoor festivals in the world. The grind is real.”

VOICES also return, heading north from the capital, saying: “Voices return to our northern shrine, our most adored festival. Taking us out of the depths of south east London, Damnation promises to be a special day of the most challenging and incredibly moving music and Voices are honoured to join the proceedings. Perhaps we shall premier some new material for the first time at Damnation 2019.”

It’s hard not to feel that in any other year MAYHEM would be fitting Damnation headliners and while Opeth have been awarded that honour this year there will be no less of a buzz around the appearance of the Norwegian giants. Their trip to Leeds follows just a few months after their last UK appearance when topping the bill at Incineration Fest in Camden, north London. Mayhem’s well chronicled past makes them one of the most influential, not to say controversial bands to emerge from Norway in the mid 90s, and their appearance on the main stage promises to be one of the highlights of the day.

Those brought up on a diet of Norwegian black metal will be equally enthused to pay homage to former Gorgoroth singer Gaahl, now performing with his innovative new project, GAAHLS WYRD.

But if Gaahl and Mayhem represent the old school black metal then the formidable Norwegians MORK and the rising Polish powerhouse MGLA represent the future. Both sets promise much although those seeking more ambient offerings should track down French shoegaze supremos ALCEST.

While not quite a Norwegian takeover this year, you could argue it’s not far short of it with BLOOD RED THRONE set for their Damnation bow. Blood Red Throne’s reputation has though been built around their face-ripping death metal anthems, the latest batch of which feature on new album Fit To Kill. The band said: “We can’t wait to return to UK, and this time with a new album to shove in your ears. We will perform a good mix of old and new tunes, and of course deliver the same mayhem performance as always! Blood Red Throne brings Damnation to Leeds!”

At the end of the night for those looking to extend the party, GOST will be happy to oblige, the avante garde duo then embarking on a series of Euro dates alongside fellow Damnation debutants Gaahls Wyrd and Mayhem. 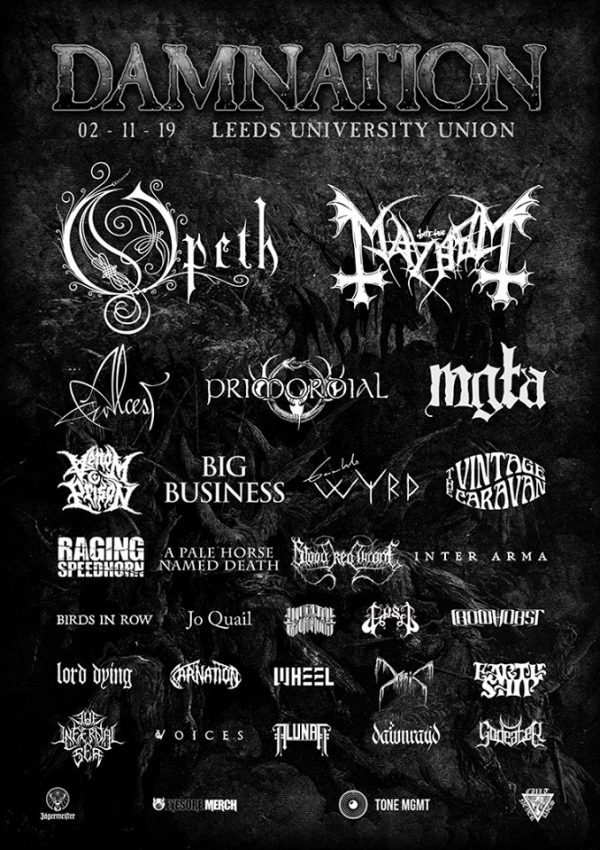