Day 2 of Dames of Darkness, and as ever at this event, the first thing that struck me was how the fans are so eager and supportive of both the event itself and all the bands, that even at such an early on a Sunday afternoon, the opening band are able to play in front of a decent sized crowd, who give them all the attentiveness and support they can. Really good to see.

The opening band on Sunday were Edenfall, from the West Midlands, who are very much a Gothic Doom Metal band. It was good to see they’d made an effort in presentation, with guitarist Rob George in corpse paint and both he and singer Clare Webster in suitably gothic clothes, which might have looked a bit incongruous on a sunny Sunday afternoon. For all the work in the look, though, it was the songs that really didn’t deliver in this set . The songs, while heavy enough, did get a little samey and the vocals, whether it was Rob George’s growling or Clare’s cleaner style, didn’t really lift or give any life to the music. Even making allowances for the fact this is a brutal time slot and that the majority of the crowd won’t have been familiar with their stuff, while it was good to see a local band on the bill, it wasn’t really an inspiring beginning to the day.

Welsh band Insuna had more of a Death metal vibe than the great majority of the other bands on the bill, even if there was little in the way of growling in their set. They did, however, have some invention and variation in style in their set, at times even straying into Power Metal territory. Although the longest song in their set, ‘Shadows And Light’, a slower song, suffered, ironically because of a lack of changes in mood and pace. The band were better than some others on the bill in that they didn’t just rely on singer A.K. to work with the crowd, but all the front line members tried to do their bit. There was a lot to like about Insuna, and their last song ‘Premonition’ showed how good they could be. 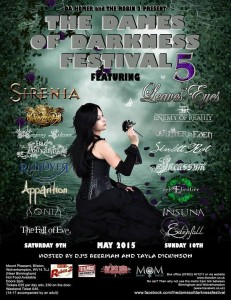 Another band with a lot of buzz in the lead up to the show were EnkElination  (pay attention, I don’t want to have to repeat myself – Lead singer Elina Siirala is Finnish, ‘Enkeli’ is Finnish for ‘angel’, hence Angel Nation, as well as being a play on her name.) . The band were easily the most confident and assured of the bands so far on the Sunday, even if they were debuting their new bass player Julia. They obviously know their stuff when it comes to songwriting, particularly with songs like ‘Tears of Lust’. Unlike some of the others, they’d given thought to making an entrance and how they presented themselves and musically it was a really solid set, so much that Elina didn’t have to make good her threat of giving us some Finnish stand-up comedy. A band to be watched.

I have to be frank, it was a bit of a surprise to see Skarlett Riot on a Dames bill. Not because they’re not a good band, quite the opposite, after a day and a bit of mostly symphonic and gothic metal, with occasional breaks for Doom and Death, having a melodic hard rock band hit the stage was good to change gear and the mood a little. Possibly ironically, the band, along with Winter In Eden had had their set length extended when Incassum pulled out following the dissolution of the band. Despite being a bit of the proverbial square peg on this bill, the band hit the stage brimming with confidence and attitude and proceeded to deliver one of the best sets of the day. Their songs are infectious, brimming with hooks, their new single ‘Divide Us’ being a great example. They interacted with the crowd better than most of the other bands over the weekend, even making an effort to get a circle pit going at one point, it was a real pleasure to watch them at work. A serious contender for best set of the Sunday.

It had been common knowledge for most of the day that Winter In Eden vocalist Vicky Johnson had not been able to make the trip down from the North East for the gig, having developed a throat infection. It transpired that the rest of the band had contacted Dave Homer and the Dames’ organisers and arranged with other singers to put together what was called ‘The Winter in Eden Allstars’ with each vocalist learning one or two tracks. It wouldn’t be a full set, obviously, which was a shame, but at least the band’s music would be given a chance in front of the Dames’ crowd. First up was Bexie James from Chemikill, who, although looking quite nervous, gave a stirring performance of ‘Knife Edge’. Then it was the turn of Andrea Casanova from Rainover, who gave a quite brilliant reading of ‘With Intent’.  I don’t know how many new fans Rainover made after their stunning show on the first day, but I wouldn’t be surprised if there a few more after this. The four proper members of the band gave themselves a slight breather, if that’s the right word, by including their instrumental ‘Windelfell’ in the set, before things were finished off with three songs from Melissa Adams from Aonia, ‘Order of Your Faith’, ‘Before It Began’, and ‘Lies’. It would be very unfair to make any kind of critical comment in such circumstances, other than to say that each of the three singers did an unbelievable job, singing from lyric sheets with only a couple of hours rehearsal at most, beginning on the morning of the gig and continuing in the dressing room while the other bands were playing, and similarly the four guys from Winter In Eden playing with unfamiliar singers, especially Steve Hauxwell who, for me, gave the single best drumming performance of the whole weekend, and on an unfamiliar kit to boot. I should also mention how well the band’s songs stood up under the circumstances. Hopefully they’ll get another shot at Dames, because they really are a quality band.

Enemy Of Reality might have had a difficult job following a band triumphing under such circumstances and generating such a lot of goodwill from the crowd, but they really gave it a shot. Playing songs from their debut album, Rejected Gods, featuring the formidable voice of Iliana Tsakiraki, they did their level best to put on a good show, but for all the pomp, the music itself was mostly straightforward symphonic power metal with an operatic voice. A lot of the time there wasn’t a lot to distinguish it from a lot of the other bands on the bill. However, when they tried to do something different, it worked really well. They had one song, the title of which was not announced, which had a very quirky staccato synthesiser riff, straight out of a Dream Theater song, that worked really well, whereas the second song in the set, again unannounced, was also striking, even if it was set in a key a little too low for Iliana to sing comfortably. As well as getting a seal of approval for having a proper bassist and keyboard player, there’s a lot of potential in Enemy of Reality, if they can follow their own path rather than confine themselves to a particular box.

And finally to the headliners, Leaves Eyes and immediately there was a noticeable buzz in the Robin as stage time approached, and it has to be said that the band more than lived up the anticipation and put in a performance that more than justified their status as headliners. From the moment the two vocalists came on to the stage a few seconds apart to a huge roar, and went straight into a set with real exuberance, attitude, and it has to be said, downright charisma, Leaves Eyes had the Robin in the palms of their collective hand. It probably helped that they came to the Robin with no new product to promote, other than Alex Krull announcing that the new album was scheduled for September. As it was it was a set full of songs from across their career, all the way back to 2004’s Lovelorn and up to the five tracks from their last album, Symphonies Of The Night, it was a set full of crowd pleasers. They even had the confidence to play a new song from the forthcoming album, which naturally went down really well, as did their cover of Mike Oldfield’s ‘To France’, which they’ve certainly put their own stamp on.

I would have the same criticism of Leaves Eyes, as I would Sirenia on the previous night, namely the lack of a bass player and the reliance on backing tracks, however with Leaves Eyes, this doesn’t seem to affect the live show so much, as the strong onstage presences of Alex Krull and his female co-singer Liv Christine, as well as their interaction on stage, more than offset any loss of spontaneity. The crowd loved it, bringing the band back for a two song encore of what might be considered the band’s theme song, ‘Norwegian Love Song’, and ‘Froya’s Theme’, ensuring that what had been a pretty good festival overall ended on a really high note.

Dames Of Darkness has become one of the best events of the year in the Midlands. It’s brilliantly run, the Robin as a venue is perfect, and there’s always an excellent atmosphere. The musical highlights this year were The Fall Of Eve, Rainover, Skarlett Riot and Leaves Eyes, with a special mention for everyone involved in the Winter In Eden set, but as ever enormous credit always has to go to Dave Homer and his team for the organising and for bringing these bands to play from all corners of Europe, and especially for being brave enough to find bands from outside the Gothic/symphonic metal stereotype. It was also good to see so many of the bands not restricting the female representation to singers, with assorted bassists, keyboard players and singers contributing to the gender balance, which can only be a good thing. Maybe an all-female band next year? Either way, it’s an event that’s always looked forward to, and next year’s will be no exception.

See our review from Day 1 here