With a bearded lady and Polish milkmaids stealing the headlines at the Eurovision Song Contest in Sweden it may have gone unnoticed in some quarters that there was not an entirely dissimilar event taking place on the same night a little closer to home in the Black Country. While the world’s media had deserted Ukraine and Nigeria for Gothenburg, it’s probably fair to say that few hacks had taken the windy road to Bilston. Had they taken the trouble to do so they would have been treated to a positive smorgasbord of European female-fronted metal bands assembled under the banner of Dames of Darkness.

Fortunately this was a musical gathering devoid of the dreaded ‘nul points’ but it still retained a strong Euro front and perhaps would not have met with the approval of Nigel Farage! This was the fourth annual Dames of Darkness with girl power reigning from the 2pm start right through to the post-midnight finish, by which time most of us had turned into pumpkins.

Most of the earlier bands were UK acts and when I arrived just before 6pm it was in time to catch Apparition, from Stafford, who were performing with the classically trained dramatic soprano Grace Meridan. In her puffed up ball gown, Grace probably would have fitted in nicely between some of the Eurovision acts. In the Black Country though, such frills and frivolity are not quite as digestible and Apparition failed to inspire me.

Using her undoubted vocal range to astonishing effect, even yodelling like a Sound of Music extra at one point, in the Robin, against a wafting backdrop of burger and chips, it just didn’t work. Even when Grace tried to sing, her voice lacked the strength to carry the song and when the mic became disconnected from the cable – not once, but twice – it was as though the Gods were contriving against her.

Next it was the turn of Skeptikal Minds who played a much heavier, more traditional style of metal. The band’s diminutive diva Karolina Pacan had a real impishness about her and was joshing with the front few rows during the sound check, generally having a good time and making friends.
When the set started it was immediately apparent that the Belgians were ready to turn the heat with some great riffs flying around. The Brussels quartet have quite a Gothic ambience these days although Karolina is unlikely to win too many doom accolades due to her constant big grin. Songs like ‘My Love’ went down very well with the Darkness devotees although there was an even bigger cheer when they embarked on their own crazed cover of ‘Ace of Spades’ which included leaving Lemmy’s vocals in the mix at certain points!

After Skepical Minds had pushed the bar up a few notches, Jaded Star were happy to maintain it. The band featured Maxi Nil on vocals, who was previously with Visions of Atlantis, but is now firmly committed to her new band. Looking every inch the Greek Goddess, Maxi’s stage apparel included a trusty mix of leather, studs and chains almost as though she had walked off the Game of Thrones set onto the Robin stage for the band’s first live show with this line-up.

Jaded Star’s gothic symphonic anthems were again well received and the heaviness in the room again edged up the level on the metalometre.

Xandria were one of the most eagerly anticipated acts of the day but left me pretty cold. This German group seems to go through singers like the Baggies go through managers. Taking the mic this time around was Dianne Van Giersbergen whose glazed expression of transfixed delight could hardly have been brighter had someone just given her the winning numbers to the night’s lottery. 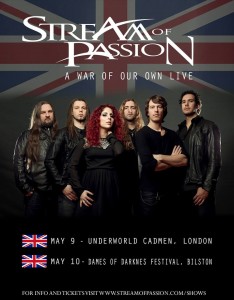 o doubt she’s a lovely girl, but vocally it was a bewildering combination of Katharine Jenkins meets Lady Gaga. Her attempts to generate some fist-pumping on the floor looked far too staged and I’m not sure how long she’ll stay the course with the Germans.

Unfortunately by the time Stream of Passion took to the stage anyone dependent on public transport to make their way home had long since left the building. When you’ve got a bill with so many bands, things can run late and that’s certainly no criticism of the heroic Robin stagehands who actually worked their socks off throughout the day in turning the stage around from one act to the next.

In fact, I think the post-midnight finish was scheduled but obviously it did mean many punters missing out on the Dutch curtain closers. This was a shame as they showed why they were deserving of the headline slot with a highly energetic and enjoyable set.

The band’s Mexican vocalist Marcela Bovio was excellent. The fire in her belly was the equal of her red mane and Stream of Passion certainly closed the door on Dames of Darkness 2014 in style.