Dak to the future

To glibly throw the label of black metal around when discussing Dakhma barely does justice to the decaying layers to which these Swiss sycophants sink. Passageways to Daena (The Concomitant Blessings of Putrescing Impurity) even by black metal’s own aurally twisted standards is something out of the ordinary. The tempo is more turgid than thrash while the vocals offer more than the conventional screeched yelps.

All of the above make this Godz ov War re-release a compelling debut album, unconventional, but wholly agreeable at the same time. The atmosphere that permeates throughout is intense, brooding and morbid. It’s the devil’s own soundtrack although to suggest the almighty firebreather will be stomping his hooves in approval is possibly suggesting a more dynamic and lively soundtrack than the one Dakhma actually provide.

The opening ‘Barashnûm (Defiled by Dead Flesh)’ is little short of a musical torture chamber with wide eyed screams cutting through a hostile mix featuring a relentless rumbling beat with the faintest of riffs fighting for air within this aural hell. ‘Where Shattered Minds Collide (the Immortal March)’ is full of menace and mystery, stomping along under its own steam although the ante is firmly upped with ‘Ascension (Flesh and Bone)’ which builds to a satisfyingly sick climax with the frightening cry of ‘Flesh and Bone’ sung as lustily as if Hannibal Lecter was gripping the mic.

On the following ‘Ascension II (The Light Eternal)’ Dakhma display the flip side of their personality with an ambient introduction almost the musical backdrop to ashes being scattered off a cliff top – hollow, haunting and abstract. As if that’s not enough to have you sleeping with the light on a deathly growl then heightens tension levels further with obscure mutterings folding into the creases left behind by some distinct and deadly riffage. Anyone waiting for ‘Chinvat (Ascension III – Agony)’ to get going is in for a long wait. If Dakhma want to wallow in seemingly endless patchworks of ethereal emptiness then that’s what they will do as five minutes pass by in little more than a murky mist of hushed tones and ambient threads.

By Dakhma’s wonderfully disturbing standards ‘Consuming the Nasu (of Shredded Impurity)’ almost passes for normality, Kerberos screeching like a cornered owl, blastbeats landing like electric charges and rabid riffing seemingly constructed under a cloak of fury and filth. The deathly mumbles excreted on ‘Of Charred Flesh (Blessed By Illuminating Fire)’ at one point sound as though a sleeping giant is being disemboweled, a low rumble accompanied by labouring breathing and heavy sighing. For atmospheric openings ‘The Silent Tower (Gather Ye of Life)’ takes some beating with its mournful melody before the slathering dogs are unleashed in the shape of yet more blackened slices of inhumanity descending like the plague.

When first released Passageways to Daena (The Concomitant Blessings of Putrescing Impurity) was already 50 minutes long. For this CD re-release it extends to around 70 minutes, courtesy of an additional two tracks of which the infectious ‘Call from the Grave’ is a Bathory cover. The kind of blasphemous brutality created by Dakhma is so far underground that if you started digging now you may just reach it by Christmas. Although Dakhma and the festive season would certainly make for uneasy bedfellows. 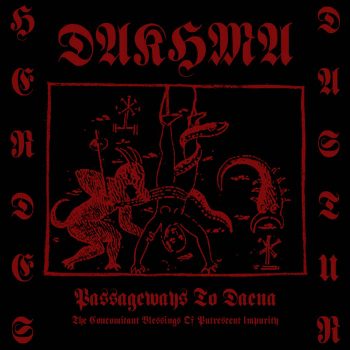