A criminally underrated Danish rock band who, apart from their US slacker anthem, ‘Sleeping My Day Away’, are probably best known from the reported insistence by the Disney Corporation that they change their name, or risk legal action, back in the eighties. Thus Disneyland After Dark became the abbreviation, D-A-D (Or D.A.D, or D*A*D or even D:A:D).

This 2-CD retrospective sequences the 30 tracks in chronological order, allowing you to trace the upward curve of the band’s trajectory over 30 years of releasing great rock albums. Sometimes it levelled out, but it always took off again. Why? Because in a musical sense, at least, this was band who always had their eyes on the prize. An out and out rock’n’roll band with a sense of humour (‘I Won’t Cut My Hair’ / ‘Bad Craziness’) and a penchant for wordplay (‘Reconstrucdead’ / ‘Lawrence Of Suburbia’), but also a rock band with serious intent.

Many of the headline hardrock bands of the seventies were allowed time to develop and fine tune their sound by the label they had signed to. It was a patient approach often rewarded by huge album sales. The fact that DAD have never been afforded the luxury of consistent, third party financial underpinning speaks volumes for their tenacity and persistence. Arguably, last year’s Dic Nil Lan Daft Erd Ark is the pinnacle of the band’s recorded work, rock music developed and distilled during 30 years of road tests; smart, skilful songwriting and considerable studio experience.

Fourth album, No Fuel Left For The Pilgrims (1989) saw a breakthrough progression from the rockabilly/new wave alt rock of their 1986 debut, Standin On The Never Never and the two subsequent releases to a more focused and indeed more traditional hard rock sound. You can hear a unique band identity being forged in the searing lyrical heat of ‘Jihad’, from that album, and in the drowsy, sensuous energy of Riskin It All’s (1991) standout track, ‘Grow Or Pay’. 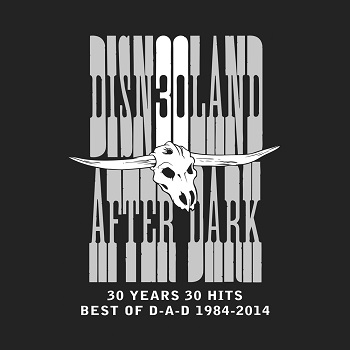 Arguably, ever since that point the band have been honing their sound, making minor adjustments here, small changes there, cultivating musical deftness in order to animate their lyrical ideas, hitting the target with unerring accuracy on ‘Laugh And A Half’s sombre, painful reflection on childhood; pricking a pin into artistic pomposity on ‘Empty Heads’ ; Binzer’s obsession with luck on ‘Everything Glows’  and ‘Monster Philosophy’ (“I’d rather be lucky than wise and smart”), then ending the second disc with the majestic ‘We All Fall Down’. It’s all imbued with a positive energy that’s impossible to resist.

They are a band who are always totally engaged with their emotions and meanings, with the musical agility to match. The proof is laid out here, over 2 discs and 2 hours of compelling, captivating rock music. For anyone who wants to get to know D-A-D, 30 Years 30 Hits is a fine place to start.