Having announced his solo project Cryfemal with such salubriously anti-christened demo cuts as Satanor and Fuck You God, there’s never been any attempt to hide the crucifix crushing sentiment that lies behind this vicious outpouring of Mediterranean mayhem.

The grotesque lovechild of Ebola, for much of the past two decades Cryfemal has been a byword for piercing black metal sorcery. The past has been a not altogether surprisingly rocky one, but Cryfemal were just about able to sustain their demon worshipping output, even surviving an enforced break when Ebola had to spend some time behind bars.

Soon after the release of Malicioso Sonido Putrefacto in 2011 it did appear that the Tenerife tyrants had finally fallen silent. A few years later though their Luciferian loins were stirred again, Ebola subsequently recruiting sessions members Bornyhake and Satur, the trio then releasing the band’s seventh album D6s6nti6rro, via Osmose Productions.

Immortal Frost Productions are natural sonic partners with Cryfemal, and the two have now aligned to release the Spaniards’ latest powerhouse Eterna Oscuridad. As before, Cryfemal are happiest stalking the graveyards from where they are able to raise the dead with such nihilist sermons as the freakishly fast ‘Necra Exequia’ and the sinister spirals that surround ‘Culto A La Muerte’.

Bornyhake’s blastbeat executions are a full-on feral force of their own while Satur’s bass tugs at your bootlaces throughout, Ebola whipping things into a firestorm with his shredded vocals roaring in the manner of Taake.

Pumped full of necro nightmares they may be, but as displayed on this their eighth full length studio recording, Cryfemal are still able to unlock the crypt door to expose some frightening weapons of demonic prowess, such as the chug that fuels the engine room on the likes of ‘El Retorno’ and ‘Reencarnacion’.

Ebola’s pulpit pummeling attacks have in no way had their edges smoothed off by the passing of two decades. The old school Hellhammer-like barrage is as soulless as ever. Don’t look for a heartbeat on this album as the tempo and texture remains resolutely frozen, finally melting away under the Spanish sun with the haunting outro instrumental ‘Eternidad’. 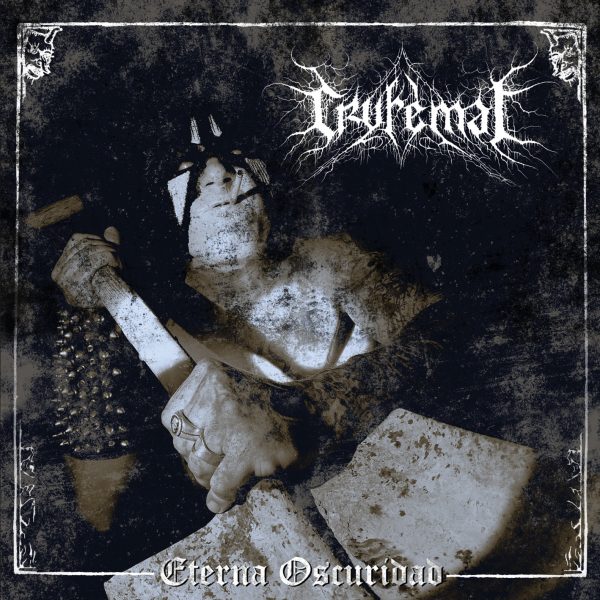