When it comes to hardcore the Cro-Mags were the real deal; years spent living in the squats and streets of the war zone that was New York’s Lower East Side hardened founding members Harley Flanagan and John Joseph. That tough street suss seeps through every groove of their seminal debut album The Age of Quarrel. A crossover classic (before the term was coined) its muscular punch appealed to metalheads whilst its unbridled aggression pulled in the punks.

Some bands feed of the friction in their ranks but the volatility within the Cro-Mags was also their downfall. An ever-rotating line up released the not-too-bad Best Wishes and Alpha Omega and then the just-plain-embarrassing Near Death Experience. Suicidal Tendencies Rocky George joined the fold for 2000s return to form Revengeuntil years of bad blood, stabbings (really!) and legal wrangling effectively prevented any new releases. Bassist Harley Flanagan is the only member to appear on every release and he recently acquired ownership of the Cro-Mags name so, after almost 20 years, they hit us with this 3-song blast of fury: Don’t Give In.

Old school fans will be happy to note that musically this EP exists somewhere between Best Wishes and Revenge but delivered with the attitude of their debut. In fact, opening salvo ‘Don’t Give In’ is not dissimilar to ‘We Gotta Know’. A slow builder it begins with a long introduction that gradually increases the tension. Rocky George’s guitar tone is immediately recognisable and fits well into the Cro-Mags template. Rocky’s weaves a line that is at once both hard and ethereal and the resulting intro is evocative, something that’s fairly unique in the hardcore genre. Like being chauffeur driven through the most deprived neighbourhood it’s a sound that “speaks” of urban desolation. A taut band stretched and held for 70 seconds is finally released and we’re into ‘Don’t Give In’ proper but there’s no sign of redemption. With the force of worlds colliding the vocals and instruments come crashing in and aurally assault the listener. There’s a nice meaty riff from guitarist Gabby Abularach and Harley, very much of the Lemmy school, plays his bass like a lead and drives the song forward at a frantic pace.

‘Drag You Under’ recalls the more raucous tracks from The Age of Quarrel and, perhaps belying Rocky’s influence, the tune has a real skate punk feel. As you can probably tell by the song titles the lyrics are standard hardcore fayre: tales of standing firm and urban strife but they’re delivered with an honest conviction that renders them vital. Another 90 second onslaught rounds out this EP in the shape of ‘No One’s Victim’ and with a killer break in the mid-section it’s sure to ignite pits worldwide and, as in their early days, it’ll please metal and punk fans equally.

Don’t Give In finds the Cro-Mags back on track and moving in the right direction. While some might bemoan the 6 minutes running time but this EPs power lies in its abruptness. Like a street fight it’s over quickly and it’s not pretty but it’s strangely enticing. 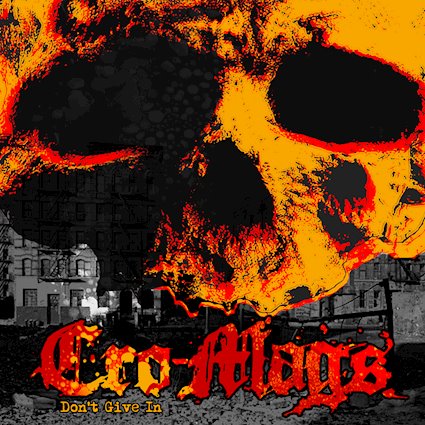