Swedish sensations Creye release their debut album on Frontiers. David Waterfield jumps in the DeLorean and goes back to the future.

Seriously, what is going on in Scandinavia these days? There is such a wealth of incredible new music emerging from the Nordic countries, with the genres of pop and melodic rock especially blessed. The latest band to emerge from this hotbed of creativity is Sweden’s Creye: a highly promising new project from guitarist and writer Andreas Gullstrand (Grand Slam). Their assured, self-titled debut transports the listener back to the halcyon days of the eighties, both musically and visually, to deliver a glossy melodic rock album replete with lashings of 80’s retro stylings, all wrapped up in a modern synthwave sheen.

Creye’s opening salvo was their 2016 single ‘Never Too Late’ followed by the three song EP ‘Straight to The Top’ in March 2017. Both songs are sumptuous AOR/melodic rock anthems and are reprised here with lead singer Robin Jidhed replacing the original vocals of Art Nation’s Alexander Strandel. Jidhed’s voice gives Creye a smoother feel but his vocals are powerful and impressive throughout. Not every track on the album ascends to the heights of the two singles although several do – ‘Christina’, ‘Different State of Mind’ and album opener ‘Holding On’ spring readily to mind – while other tracks grow in stature with repeated plays. Pleasingly for a debut album, there is substance as well as style with no weak links among the 13 tracks on offer.

Creye have honed a sleek, seamless sound, led by Joel Rönning’s fulsome keyboards, powered by Gullstrand’s guitar licks over a tight rhythm section and overlaid with expansive harmonies. Their sound may be a little slick for some tastes but Creye’s spirited, accessible, immaculately produced melodic rock is very easy to like.

Fans who appreciated the band’s ‘Straight to The Top’ EP will be delighted by this album. If you have a penchant for eighties melodic rock or enjoy bands such as Work of Art, Art Nation and One Desire then Creye are certainly worthy of your time. The band has evolved from Gullstrand’s studio-based venture into a classy AOR outfit with a debut album they can be justifiably proud of. Creye play their first ever UK gig at Nottingham’s Rockingham Festival on 21 October. Go along and check them out. Tell them Midlands Rocks sent you…! 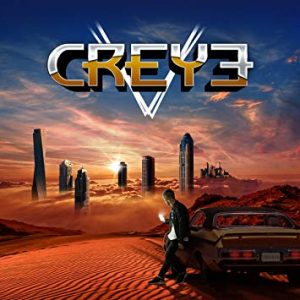