Arriving like a musical tsunami Static Dress deliver an earth-shaking, denture-loosening sound. However they’re not all pure bludgeon as tracks like ‘Clean’ and ‘Adaptive Taste’ evidence a lot of variety with the quieter moments acting as a foil to make the heavier sections even more crushing. Attacking their instruments with great gusto they play post-hardcore in the vein of Underoath and The Bled and their 25 minute set is both severe and succinct.

Nashville, Tennessee is perhaps not your first thought when thinking of punishing metal but that city has birthed one of the scenes most brutal new bands in the shape of Chamber. Heavily laden with riffs the very moment they hit the stage a huge pit erupts: it’s that kind of music. Fists fly and windmill kicks prevail, like an old school hardcore show, as the band perform tracks from their debut EP Hatred Softly Spoken with ‘Replacing Every Weakness’ in particular packing a heafty punch. There’s something of Napalm Death in their modus operandi and the two new tracks debuted point to a bright future as Chamber take their love of Slipknot and the Deftones and produce a mutant strain of metal. 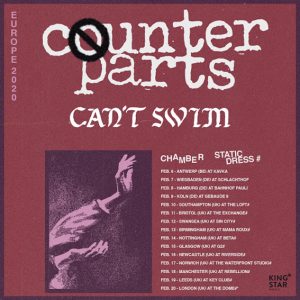 New Jersey’s Can’t Swim have deftly avoided every effort at categorisation and that’s given them a lot of freedom as their set constantly shape shifts from post-punk to hardcore but it’s all held cohesively by songs that are drenched in melody. In fact they remind me of pioneers Burn with their inventiveness and inherent groove. The melodic ‘Prick’ (from latest EP Foreign Languages) proceeds ‘Come Home’ with its subtle sonic shifts while ‘Power’ has an old school hip hop vibe that’s juxtaposed nicely with a crushing riff. Brutally honest lyrics ensures that ‘Shoot!’ is fired with venom as the heartfelt ‘Your Clothes’ is underpinned with some fine tribal drumming. The strangely danceable ‘Stranger’ is guaranteed to please any crowd and ensures they bow out on a high.

Having released six full albums (and a string of EP’s) in ten years and, coupled with a punishing tour schedule, the word ‘intense’ doesn’t do Counterparts justice. Having just released a career defining album in the shape of Nothing Left to Love finds these Canadians full of confidence and that shines through as they take to the stage and launch into ‘Love Me’. It’s akin to an artillery barrage as salvo after salvo is unleashed with ‘Wings of Nightmares’ and ‘Paradise and Plague’ following in quick succession. Vocalist Brendan Murphy is a master of his art and his in between song banter is worth the price of admission alone. But there’s barely a moment wasted as the furious ‘Bouquet’ explodes into a thousand pieces and proceeds the equally vitriolic ‘Swim Beneath My Skin’. A blur of unrestrained energy ‘Outlier’ and ‘Your Own Knife’ topple over each other as the riff heavy ‘Compass’ brings the set proper to a conclusion. Of course the band return for two well earned encores, the first of which is ‘Choke’ from The Difference Between Hell and Home opus and sets things up nicely for ‘The Disconnect’ which causes all sorts of mayhem in the pit before Counterparts depart to terrorise another town.

Counterparts set list:
Love Me
Wings of Nightmares
Paradise of Plague
Stranger
Monument
No Servant of Mine
Bouquet
Swim Beneath My Skin
Separate Wounds
Outlier
Your Own Knife
Compass
Choke
The Disconnect