Paul Castles checks out the line-up for this year’s Desertfest, and pin-points just a few of the artists set to perform at the heady three-day festival in Camden in May.

Desertfest traditionally presents three heady days of stoner sounds although this year the curveball booking of iconic grind giants Napalm Death will ensure at least one massive thunderstrike will pierce the hazy Camden air in May. More than 70 acts will perform across six platforms, large and small, ensuring the already congested Camden streets will be packed with an even tighter throng than usual as a few thousand stoner and metal fans merrily navigate their way between venues. As with the previous seven Desertfests, this year presents a staggering array of talent and the only problem you’ll have is trying to catch as many of them as possible… while still finding time to queue at the bar!

So to Day 1, Friday 4 May, where early arrivals will be able to pick between rising Suffolk stoner trio Old Man Lizard at The Underworld and Reading’s heaviest groovers Morass of Molasses just up the road at The Devonshire Arms.  The opening day is the only one this year in which the action is split across six venues, the largest of which is Koko, where the wonderful Swedish psych quartet Graveyard top the bill. After their bewitching Hisingen Blues album of 2011, the retro specialists followed up with Innocence and Decadence in 2016 only to then to make a shock announcement that they planned to call it a day. After a few months of navel gazing they realized the error of their ways, reuniting, with Desertfest signalling their first UK show in two years.

Koko also welcomes The Obsessed fronted by the legendary Wino. The roots of these doom veterans stretch right back to the 70s where they were part of the US burgeoning doom scene alongside such luminaries as Pentagram and St Vitus. For those seeking more visceral pleasures, the aforementioned Napalm Death will be rearranging brain cells over at the Electric Ballroom. Nuclear Blast Records release a 30-year Napalm celebration compilation, Coded Smears and More Uncommon Slurs, on March 30 and it’s reasonable to assume that a whole bunch of that material will feature in their Desertfest slot.

The extremities of the underground scene are as broad as the Nile, highlighted by the presence of the wonderfully enigmatic Warning on the same Electric Ballroom stage. In many people’s eyes their heart-string tugging set stole the show at Damnation in Leeds last year. The Friday Electric Ballroom line-up is ferociously strong as the northern pagan powerhouse Winterfylleth perform, and with a new album under their Lenin cap in The Hallowing of Heirdom.  The performance of NOLA legends Eyehategod will undoubtedly be a highlight for many and they will emerge from the swamps of Louisiana with their heady raw cocktail of primal punk, trad heavy metal and sonic savagery.

Those in need of more ambient sounds can catch the occultist Jex Thoth who will no doubt illuminate the dark recesses of The Underworld stage with her assortment of smoking stage props. If dancing with the devil is not for you, then make your way to the Black Heart where Ghold will be playing a few tracks from last year’s remarkable album Stoic.

Anyone seeking a steady start to Saturday’s action best give a wide berth to The Devonshire Arms as Cornish two-piece Monolithian are likely to be in unforgiving mood with their shuddering riff dispensation. Those spending the whole day hanging out at the Dev, which is always great fun, will have their seal put on their day much later in the evening by the ephemeral Darkher, all wonderful mystique and haunting grooves, fronted by the  enchanting Jayn H Wissenberg.

Saturday’s Underworld line-up is topped by Steak Number Eight who impressed so many when performing at Deserfest last year while the same subterranean stage will also host Satan’s very own sons and daughters, Dead Witches, with Soozi Chameleone now on vocals. The largest venue on the Saturday is the Electric Ballroom where stoner giants Weedeater will be making the first of two highly anticipated performances at this year’s festival. The three other acts to grace the Electric Ballroom stage on Saturday are the mighty death metal greats Akercocke, California doom slayers Sourvein and the thunderous Tokyo titans Church of Misery. The Black Heart’s line-up is equally magnetic, topped by Miss Lava and given further clout by the likes of Mastiff.

Be sure to save enough in your locker for the Sunday. Pist can be relied upon to get the beer taps flowing early doors at the Black Heart, and the irascible Lancs lads are always immense fun, albeit a little rough around the edges! Climb the stairs later too for Chrch, the Sacramento specialists in mournful morose doom should be immense. Doom fans will also be out in force at The Underworld for the suffocating Denver destroyers Primitive Man, while no less intense will be Fister, travelling from St Louis, Missouri, to perform in the UK for the first time.

The largest venue on the Sunday is the iconic Roundhouse, where Monster Magnet will be laying into cuts from excellent new album Mindfucker with a few Space Lords thrown in for good measure. The clock will well and truly be turned back for the psychedelic performance of Hawkwind, incredibly still fronted by David Anthony Brock at 76. Watch out for their silver machine in the car park! Elder also perform at the Roundhouse, their third visit to Desertfest and after last year’s outstanding release Reflections of a Floating World, the men from Massachusetts can be guaranteed to land another spellbinding blow to the senses. If you can think of a better way to spend three days in May than spending it at Desertfest then good luck to you. You’ll find the rest of us in Camden! 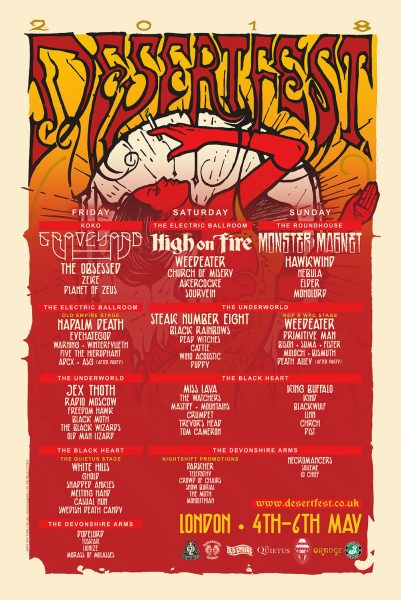