Black Country thrash quartet Elyrean are heading to Catton Park for Bloodstock 2019! They secured their place on the Hobgoblin New Blood Stage by winning the Wolverhampton leg of the Metal 2 The Masses competition. Emily Castles caught up with them soon after. 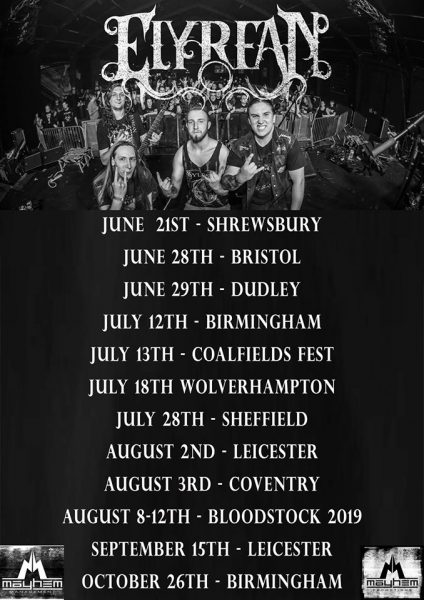 MR: Many congratulations on winning M2TM in Wolverhampton – How do you feel about playing Bloodstock?
Thank you! We’re very excited to be playing, to be a part of such a prestigious event is something we still can’t believe is quite happening yet… It’s a dream come true for us.

MR: How did you feel you performed on the night at KK’s Steel Mill?
We think we did pretty good overall. These kind of shows help push us further and further so we thrive under the pressure.

MR: You’ve had a new band logo to celebrate!
We have, thanks to Kieran Scott of Brutulz Art. We previously worked with him on our first single we put out. He offered his services again and we loved seeing what he thought of doing. He’s done an amazing job, we’re very pleased with it.

MR: Had you been hopeful or confident going into the final?
We hoped we could pull it off, though we knew the competition was incredibly tough… I don’t think we expected to win, so it’s a very pleasant surprise.

MR: What did you think of the overall standard on the night?
Incredible. Every band was on fire, there was lots of talent and charisma on display, plus everyone got on and was very supportive and friendly of each other. We’d love to work with them all again as everyone really stepped up the game that night. 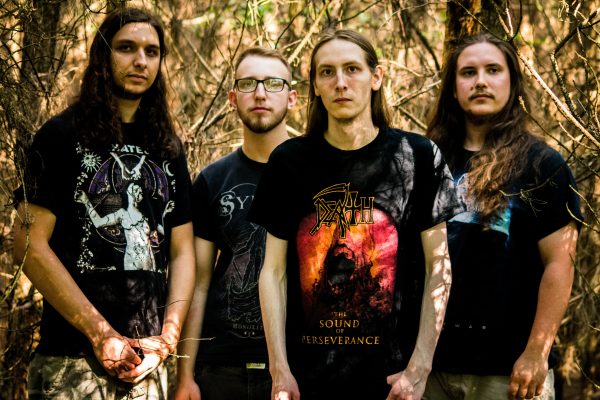 MR: What do you think of the whole M2TM structure and the way it offers young and new bands the chance to qualify through heats to eventually play at Bloodstock?
It’s fantastic. It’s a great way to push yourself and to reach new people. There’s lots of great people who play and also turn up to the events, so you can make lots of new fans and friends. There’s nothing to lose and it gives bands a platform to elevate themselves from, it’s a win-win for everyone!

MR: Is Bloodstock a festival you know well – Have you been as fans?
Yes, we’ve been quite a few times and have always wanted to one day play the festival. We was there just last year actually, watching the almighty Gojira, Onslaught and Power Trip crush! We also built a cult based on the Ferris wheel and had a debate with people over which they preferred: Tits or Thrash? Thrash lost, unfortunately.

MR: Have you any gigs in the pipeline before Bloodstock… I know you’re playing Scruffy’s in Birmingham next month?
We have quite a few booked up that have yet to be announced. Playing some familiar places with familiar faces, and then some new places we’ve never been to before. It’s all very exciting for us.

MR: Do you see Bloodstock as a platform to take Elyrean up the ladder a notch or two?
Definitely, it’s giving us even more drive to keep pushing forward. One year it’s New Blood, then Sophie, opening Main Stage etc…. Eventually other big Metal Fests. This is just the first chapter for us, we’re hoping there’s many more to come.

MR: As a thrash band you must have enjoyed playing at Thrashersaurus in Norwich recently?
We loved it! One of the best crowds we’ve ever had, it was a tough day but worth it for us. We were sad to leave, we’re very thankful to Errol for putting us on. Hopefully we’ll return again!

MR: You had a new single out last month, Blacken the Sun, with an EP in the pipeline. Can you tell us something about these?
We’ve been recording our EP on and off for a while. It’s all self-produced and our lives have had a lot happen that makes recording difficult at times. There’s not much left now so it’ll be out before the year ends. We don’t want to say too much, but it’s definitely thrash with a different take. There’s something for everyone, but it’s still very much a thrash album through and through.

MR: Have you had a look at the Bloodstock line-up this year, anyone in particular you’ll be hoping to catch?
We have, we were planning to go regardless this year, there’s quite a few we want to see. Anthrax, TesseracT, Death Angel, Xentrix, Skeletal Remains and our friends in Krysthla, to name a few.

MR: What can fans expect who may be seeing you at Bloodstock for the very first time?
Riffs. Lots and lots of riffs. Also a lot of shred so if you love solos then we’ve got plenty of them to whet your appetite. Expect a few crappy jokes too, we may be on stage but we’re also idiots with a stupid sense of humour and that definitely comes through in our interactions with the crowd. More than anything though, expect to see us at a bar, or in the crowd because we love hanging out and seeing friends and bands. That’s what the festival is about first and foremost! Hopefully we’ll get to meet lots of new people!