Finland’s somewhat unclassifiable Cosmo James Beat Machine are back with ‘Skeleton Elevator’, their 6th album and, coincidentally (or is it?) their first new release in 6 years. Quirky, angular, is what it is…maybe. There’s blues, a dash of punk, Beefheart, Tom Waits, a lot of clattering – it’s all in there. Anyways, let’s dig in and see what else we can find.

So yeah, Finland, bleak Eastern Finland. ‘Tundra boogie’ is how they describe their sound and it kinda fits, it bleeds into the sound. The album was also recorded in one sleep deprived 24 hour session which, again, feeds into the sound of this somewhat wired album.

Proceedings commence with the wonderfully titled ‘St.Elvis In Disgraceland’. The lo-fi blues of Seasick Steve immediately spring to mind. The slide riff is scratchy, primitive, seemingly wrestled out of some battered, homemade one-stringed cigar-box guitar. It grooves along, buoyed by Pharaoh Pirttkanga’s rasping vocals.

And on it goes. We’ve already mentioned him but Tom Waits is a definite touchstone. The nervous energy of ‘Transformed’, with it’s squonky riffage, recalls Waits in his ‘Rain Dogs’ prime…and there is also much talk of cocaine and, I quote, “holy motherfuckers”.

The percussion throughout is busy, rattly, like old, dried-out bones bouncing off each other. There are FX-laden guitar overdubs. The frenetic riffs of ‘Magnetic Pole Reversal’ skitter around like confused spiders trying to find a safe haven from a storm. ‘Popeye Perry’ meanwhile is alien rock ‘n roll, driven by a fried Bo Diddley beat.

Humour is of the juvenile variety, farting in particular being a key theme (see ‘Dr. Butt’s Dispensary’ and ‘Backend Boogie’ – the former tracing the lineage of it’s swampy snake oil salesman schtick back through Beefheart and Dr. John, all the way to Screamin’ Jay Hawkins). When it rocks, it rocks in a twisted way, occasionally with added funk and disco, the glorious sound of 1,000 garage bands with bad amps.

And then we’re into the home straight. ‘Hambone Louie’ is Showaddywaddy on very bad drugs – it’s boogie, jive and glam…all squeezed into trashy, sparkly, spandex hot pants and paraded around the sleaziest club in Finland, while ‘Mandrake’ wraps things up with a stop-start blues and some garbled lyrics – “satellite fish” anyone?

So yes, it’s a somewhat frazzled, intense album. Sleep deprivation, pickled herring and 30 days of night put to music (apologies for the cultural cliches). And yes, it works – ‘Skeleton Elevator’ is a fine, twisted, fucked up blues punk carnival. Roll up… 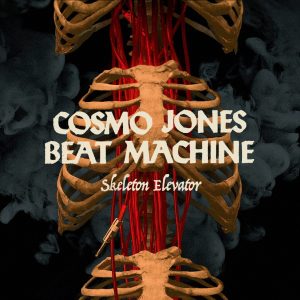