The epitome of traditional metal with a dirty American twist…

Alright, I’ll admit it – I’d never really listened to Corrosion Of Conformity before I got this in for review. As a fan of frontman Pepper Keenan’s work with Down, I’m fully aware that I should have dipped into something from their 25-year nine-album back catalogue by now, but apart from a tape copy of 1996’s ’Wiseblood’ back in the day, I hadn’t really invested much time in the North Carolina four-piece.

No Cross No Crown has made me re-evaluate my musical priorities a little. If I’d ever doubted that southern US rock could be fused with Sabbath-style old-school metal and whiskey-soaked vocals, this album assuages that; apologies to those who already know CoC’s modus operandi, but to a newcomer No Cross No Crown is the epitome of traditional metal with a dirty American twist.

They kick off big. Massive guitars and rhythm section (with a very good mix, courtesy of longtime producer John Custer) are a given for the first few tunes before you hit the first of a few weird intra-song tracks that work perfectly in the context of the album but might grate with folks who play their music on ‘random’ (I must emphasise – not me).

If you’re old-school enough to play the whole thing in order, you’ll get the psychedelic middle section to ‘Wolf And Crow’ with context from its preceding track… and even the slightly weird mid-album acoustic segue-way ‘Matre’s Diem’ leads perfectly into the balls-out riffage of ‘Forgive Me’.

Trademark low-tempo blues-edged metal rears its head in ‘Nothing Left To Say’, before another low-tempo acoustic section leading into ‘Old Disaster’… this is an album as an adventure. It’s a little long (14 songs in 53 minutes, some of them veering off into unnecessary guitar territory), but the last third of the album brings in some stomping riffs and throat-tearing vocals (‘Old Disaster’, ’E.L.M.’).

As an album, it’s still kind of hard work. There’s some fantastic lyricism in there, and the musicianship, production and sheer passion make it accessible; but as a whole it doesn’t grab me in the way that an album from ‘a band I’ve been recommended for years but never got around to’ should. If they’d cut it down by even ten minutes, and shaved out the padding… yeah, it could be something worth having on rotation… 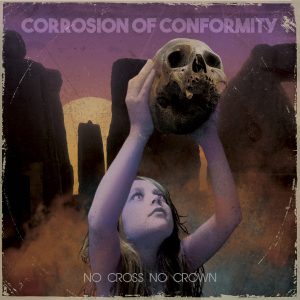