Set in the serene environs of Great Tew park in the heart of the rolling Cotswolds, the one only Cornbury Music Festival returns after a two-year absence. This years festival is billed as “The Final Hurrah” and promises to be the very last Cornbury. If that’s true then, with an array of amazing artists, the festival also known as “Poshstock” is going out with a bang! 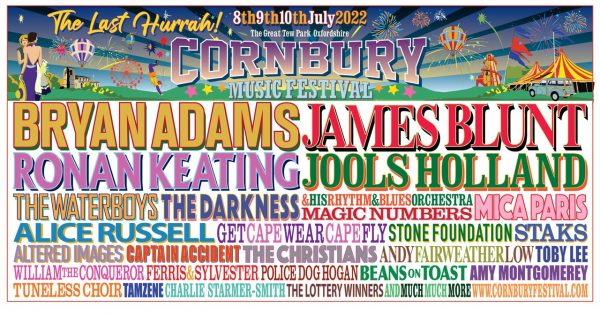 My Cornbury gets off to a rather noisy start over on the Riverstage Stage with local act Darkgnoss. They’re a three piece who sound far bigger than their constituent parts and make good use of musical dynamics by juxtaposing loud and quiet passages. Their dark and sinister sound (especially the track ‘Hands’) doesn’t seem out of place on a bright summer’s afternoon. Darkgnoss remind me a little of American grunge-masters TAD; they are heavy and melodic and with earworms such as ‘Injector’ they can’t go wrong. One of the delights about Cornbury is stumbling upon an unexpected band who rocks your socks off and Darkgnoss are such a treat.

Hailing from the Emerald Isle, Amy Montgomery was weaned on bands such as AC/DC, Black Sabbath and The Eagles and you can hear those influences seeping through every note of her music. When you factor in a lyrical honesty and a “music as therapy” vibe, you have a pretty heady conclusion. Performing tracks from her singles and EP’s, Amy soon wins over the crowd and the good vibes that radiate from the stage only increase with a cover of ‘I Feel Love’ (originally performed by Donna Summer). Like Fleetwood Mac in all their ‘70s glory, Amy and band unleash a succession of bangers in the shape of ‘Intangible’, ‘Tree Song’ and ‘Anywhere’ whilst ‘Soul Medicine’ finds the band departing in a blaze of rock n’ roll.

The UK is currently basking in a heatwave, and as if it wasn’t hot enough already Stone Foundation have come to raise the temperature by a few degrees. Riding high on the success of latest album, Outside Looking In, they exude confidence and their soul/rock/jazz mash up is tailor made for an English afternoon. They’re an eight-piece band (count ‘em!) who are a blur of energy and they look delighted to be back on stage after the pandemic enforced hiatus. ‘Seasons Of Change’ is a timely number whilst ‘Next Time Around’ (co-written with Paul Weller) is smooth and chocolatey, like a river of silk, and comes awash in retro keys. It’s impossible not to get swept up in the band’s effervescence and they depart the Songbird Stage leaving the crowd baying for more.

A band who are tailor made for the Cornbury crowd are British country duo The Shires. Formed in 2013, this pairing seemed unlikely stars when their debut album, Brave, gatecrashed the Top 10. With sublime harmonies bouncing around in every direction, there’s something very uplifting about this act and songs such as ‘Friday Night’ don’t really bear over-analysis; they are just great tracks that celebrate the exuberance of life. The Shires turn in an interactive performance; thye demand the crowd join in the fun, and there’s not a soul present who isn’t clapping and singing along. With five studio albums to draw upon, The Shires deliver a “greatest hits” set, and it’s one that just keeps getting better and better.

I don’t feel that The Darkness got their due for revitalising rock music in the noughties. Following a barren decade for heavy metal their 2003 album, Permission To Land, was like a breath of fresh air, and it’s a track from that record that that kicks off this evening’s set. The crowd are packed in tightly stage front as the band launch into an excitable version of ‘Growing On Me’. I’m not sure how many of those present comprehend the double entendres that permeate the band’s songs, but no worries because they’re more than happy to sing along with Justin Hawkins’ falsetto vocals. Justin is turning into the quintessential English eccentric (as all ageing rock stars should) and cuts a Freddie-Mercury-at-Wembley figure as he leads us through a high octane ‘Get Your Hands Off My Woman’ while ‘I Believe In A Thing Called Love’ gets the biggest cheer of the day. Despite us basking in the hottest day of the year, ‘Christmas Time (Don’t Let The Bells End)’ makes a strange set closer…but what did you expect from The Darkness?

After the musical pyrotechnics that The Darkness unleashed on the Pleasant Valley stage, a quite storm is brewing over on the Songbird courtesy of West London’s The Magic Numbers.  Their set is a slow builder that’s encased in a strange other-worldly mist but make no mistake; The Magic Numbers are all business and by second track ‘Long Legs’ (from their self-titled debut album) they’re firmly in the groove. A few musical gremlins make an appearance, but the band are an unstoppable force of nature and ‘I See You, You See Me’ proves itself a musical balm. There’s definitely an American, West Coast vibe in the band’s sound but it’s filtered through a decidedly English sensibility (think The Sundays) and their blending UK and USA influences makes for an intriguing combination.

After the slightly surreal Ukulele Bandioke, Saturday gets off to a more solid start with Great Bear Radio. They’ve a sound that swirls nicely in the Oxfordshire countryside; awash with keys and is so lithe and ethereal you feel it could get caught on the breeze and float away. However, this quintet get progressively heavier as their set progresses and it transpires they can really pack a punch. Their songs are cinematic and catch the essence of a certain moment in time; it’s a cosy corner in a bar or a deserted beach at sunset and, delivered with the swagger of ‘90s emo, marks them as ones to watch.

Any act called Beard Of Destiny are an enticing proposition, and I’m glad I checked out this two-piece because they didn’t disappoint. With a beard you could lose a badger in, the lead vocalist/guitarist delivers his lyrics with just the right amount of bemused nonchalance while the drummer attacks his kit like Keith Moon on Ritalin, and the effect is akin to John Otway jamming with ZZ Top. Their song titles, and indeed their songs, are just as good as their moniker (‘Crocodiles Of The World Unite’) and parting shot, ‘The Ghost Of Larry Grayson Perry’, raises more than a few smiles and I’m sure Beard Of Destiny have made a few friends today.

Child prodigy Toby Lee made his name appearing on TV shows such as Little Big Shots and Ellen Show before starring in the School Of Rock musical. In a whistle stop career he then made a guest spot with Joe Bonamassa at The Royal Albert Hall and, with the sky the only limit, he’s now rocking the Songbird stage at Cornbury. He has a sound that rolls the blues, soul and rock all into one and is developing a signature style that’s sure to become as recognisable as Eric Clapton or Gary Moore. Toby (and band) play with a maturity way beyond their years and they cast a spell far and wide with the sublime ‘Bluest Blues’ being a definite highlight.

Perhaps the hardest working musician on the scene today, Jay McAllister (the artist also known as Beans On Toast) hits Cornbury only 24 hours after his triumphant slot at the 2,000 Trees festival. The often-autobiographical nature of Beans’ lyrics creates a strong connection with his audience, so much so that we feel we know him intimately. You can draw a direct lineage back to artists such as Bob Dylan and Billy Bragg, but Beans has an optimism that sets him apart, and if you need proof just check out ‘Not Everybody Thinks We’re Doomed’. Considering we’re at a festival ‘Take Your Shit Home With You’ is particularly pertinent, while jumping from stage and singing final track, ‘The War On War’ from within the crowd only increases the bond between Beans and his fans.

Taking their name from a Lou Reed song (‘The Kids’) The Waterboys have had a varied career that can be split into three distinct periods. First came their “big rock” phase that inhabited the same kind of sonic space as U2 and Simple Minds, the came a Celtic folk vibe followed by a drift into alternative rock. Today’s set encompasses all points of their journey and until I saw the band live (this is my first time, shame on me) I never realised what a strong discography they possessed. With their critically acclaimed new album, All Souls Hill, setting the charts ablaze it seems The Waterboys can do no wrong and ‘Blackberry Girl’ (from the new record) holds a large crowd spellbound. With barely a second wasted, ‘The Whole Of The Moon’, ‘A Girl Called Johnny’ and ‘All The Things She Gave Me’ tumble forth in double quick time while a spirited version of ‘Fisherman’s Blues’ makes for a fine closer.

The fiery sun which has been frying us to a crisp all day finally starts to set, and it bathes the whole of Cornbury in a warm orange hue. This makes the perfect frame for tonight’s headliner Bryan Adams, who screams “Let there be guitar” by way of introduction (never in the annals of rock ‘n’ roll have truer words been spoken) before launching into ‘Kick Ass’ which turns the stage into a riotous cornucopia of light and sound. Stopping by as part of his So Happy It Hurts Tour Bryan and band proceed to deliver a crowd-pleasing set, and their musical arsenal, heavily laden with groove and anthemic choruses, are perfect festival fodder, and ‘Somebody’ sounds simply amazing with the assembled throng singing “Somebody!” back at Bryan. There are a few glitches, with the sound cutting out briefly, but the band power forward with ‘Shine A Light’ and ‘Go Down Rockin’’. Without a female vocalist ‘It’s Only Love’ sounds a tad sparse (as does ‘When You’re Gone’) and it would have been cool if he’d got a guest singer to duet on these tracks (idea: Mica Paris performed earlier today) to bolster them with the duality they deserve.

Bryan’s smash hit ‘Everything I Do (I Do It For You)’ became old pretty quickly when originally released, and time hasn’t been that kind, but its airing seems to please the casual fan, and it also injects a nice change of pace. However, this set works best when it rocks out, such as on the rockabilly infused ‘You Belong To Me’, and the crowd-pleasing ‘Summer Of ‘69’. ‘Cuts Like A Knife’ is touted as set closer but, of course, the band return for some well-deserved encores (it’s inconceivable that they wouldn’t play ‘Run To You’) but it’s a surprise cover ‘Can’t Take My Eyes Off You’ (made famous by Frankie Valli) that wafts gently over Great Tew park and sends everybody home happy.