Not only is Holy Roar the label behind Midlands’ outfit Conjurer’s debut EP, as Paul Castles suggests, it also aptly captures the mood of their impressive first release, out on 1 July 2016

Bloodstock is now looming over the horizon like a great uncontrollable behemoth. This year’s three-day metal jamboree at Walton-on-Trent again features an unparalleled line-up with the likes of Mastodon, Gojira and Slayer, set to grace the main stage. Don’t, though, forsake some of the bright young things playing for their very lives in the New Blood Tent. This arena has spawned some great acts over the years some of which have returned to play the larger Sophie Lancaster platform. Performing on the New Blood Stage this year will be thrusting sludge quartet Conjurer whose burgeoning reputation has now reached much further than their Midlands homes.

Conjurer secured their golden ticket to Bloodstock when winning the Metal 2 the Masses regional heat at Leicester’s de Montford Hall. This news would have come as no surprise to anyone whose seen them reduce a succession of Midlands stages to rubble over the past year or so. So with the cards falling in their favour like a Vegas high roller the release of their debut EP could hardly fall at a more prescient time. And for the modestly named I to be on the esteemed Holy Roar Records (Svalbard, Rolo Tomassi, Slabdragger) speaks volumes about how Conjurer’s standout shows on such significant platforms as Mammothfest have not gone unnoticed.

The first of the four tracks is the unforgiving ‘Behold The Swine’. Aside from a succulent mid-song transcendental interlude, this ferocious opener features a cascade of grenade dropping drums, riffs rich in melody and menace, and thanks to frontman Dan Nightingale some throat ripping vocal barks. Were it not for a piercing fingernails down the blackboard screech you wouldn’t even have cottoned on that the opener had ended and ‘Scorn’ had started such is the seamless transition between the first two songs. Shortest of the four tracks, ‘Scorn’ is also the most hostile with a flurry of destructive aural waves whistling past your ear like arrows before Conjurer take the wraps off a breakdown of such magnitude that you can’t even see its peak.

With the assured confidence of youth oozing from their pores, Conjurer crack on with ‘A Chasm Forged in Dread and Disarray’ a heavily textured track in which a few ambient passages act as soothing dividers between the remorseless mid-tempo sludge onslaught which is swept along under a deluge of blastbeats and Dan’s excoriating vocal emissions. If the title of the final track ‘Frail’ hints at an altogether more vulnerable sound then that indeed is what we get… for about the first 15 seconds. Just as the gently picked guitar rhythm starts to tremble like US doom heavyweights Pallbearer the slowly awakening giant is prodded into life by Conjurer.

Finding its feet slowly, the grooves created by Andy and Brady slowly and perniciously start to do their stuff, knocking restlessly at the door. As the senses heighten, Dan starts to stretch and strain, before finally the cloak of fragility is not so much removed as shred to ribbons as Conjurer mount one final seismic surge under a thumping backdrop. A standout debut offering from a band whose trajectory is only pointing one way. 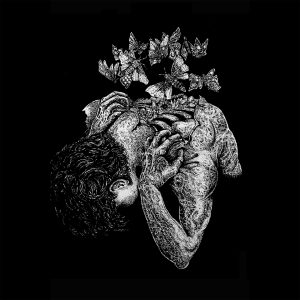